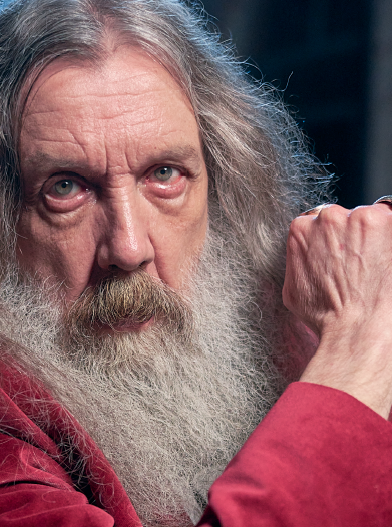 Excerpt from page 58-59 of Alan Moore's BBC Maestro Course Notes 1.0, related to the 29th episode of the series, Approaches To The Future. Full course: HERE!
Alan Moore: [...] I recently came across ‘misprision’, an academic term that – if I’ve got it right – means a wilful misunderstanding where you know that a certain idea is not correct but you use it anyway because it opens up creative possibilities. When I was preparing my H. P. Lovecraft opus, Providence, I was reading an awful lot of Lovecraft criticism including the so-called ‘Cthulhu Mythos’ that had been an invention of later writers and that Lovecraft himself would not have recognised.
One psychologist, Dirk Mosig, suggested that all of Lovecraft’s stories were intended as episodes of some gigantic hypernovel, that he was creating a new form of the novel that comprised these 30 or 40 fragmentary stories.
While H. P. Lovecraft had not meant anything like that, with the concept of ‘misprision’ in my mind, I thought, ‘But what if he had?’
And so I began building that hypernovel and so came the plot structure for Providence. [...]
Stream the full course HERE! 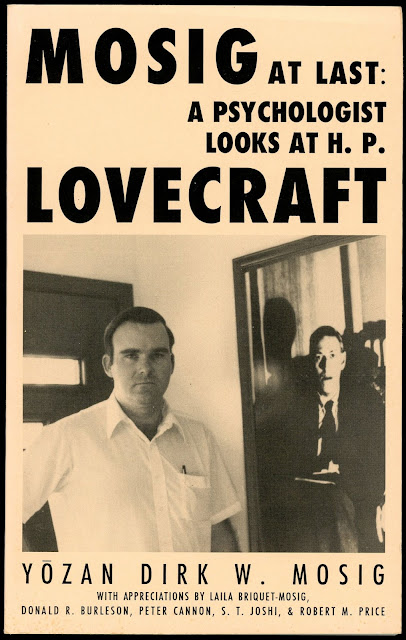 Excerpt from a great 1998 interview by writer Matthew De Abaitua.
The complete piece is available HERE.

Matthew De Abaitua: Prospective TV and film projects are always so up in the air.
Alan Moore: It’s barely even up in the air, it’s in some vapourous netherdimension from which it may coalesce into something as sturdy as a soap bubble: the From Hell film is going to go into production in April, May, June – I understand Sean Connery has been signed for it, Hughes brothers to direct, it sounds like it might happen. But I’ve seen two of my books, V for Vendetta and Watchmen go through various stages of Hollywood optimism. But I’ve not been that interested. I mean, it was nice to meet Terry Gilliam, the first thing he said to me over lunch was “Well, how would you turn Watchmen into a film?” and I said, “Well to be honest Terry, I wouldn’t.” So we went on to talk about other things and just had a great lunch. But Big Numbers could work, it was always more like a TV series than a comic book anyway. All the visual elements, the backgrounds were photo-referenced, it might have been a lot easier if we had just filmed it to begin with. But Hollywood, television and film is not my prime area of interest. Because I would never have any control, working in those areas. It’s nice to get the money from a Hollywood project, but whatever they do with it, it would be their piece of work, and not mine. Someone said to Raymond Chandler, ‘how do you feel about Hollywood ruining all your books’ and he took them into his study, pointed to the shelves containing ‘Farewell My Lovely’ and all the rest of them and said, ‘there they are, they’re alright, they’re not ruined.’

Read the complete interview, HERE.
Posted by smoky man at 11:12 AM 0 comments

Above, an interesting purple portrait of the Bearded One by Chilean artist Diego Mora G.
More about the artist HERE.
Posted by smoky man at 9:30 AM 0 comments 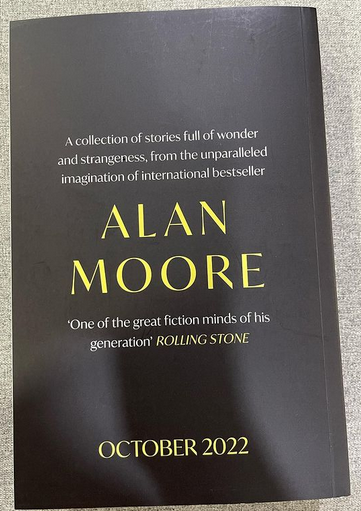 Above and below, pictures from a proof copy shared on Instagram by Kenny Chan, here.
The contents list reveals the title of the 9 short stories included in:
The book, published by Bloomsbury, will be available in hardback, eBook and audiobook on 11 October 2022. 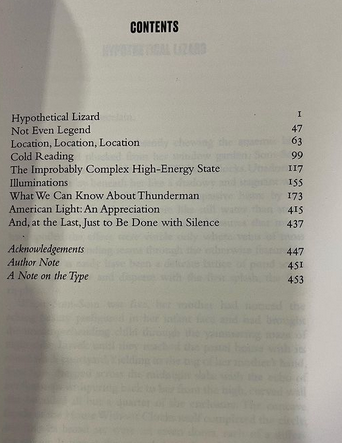 You can get some hints about the stories HERE and HERE.
Posted by smoky man at 6:47 PM 0 comments

Above, a colourful portrait of Alan Moore by French illustrator Clément Dengremont.
For more info about the artist: Twitter - Instagram - Behance
Posted by smoky man at 11:30 AM 0 comments

The Sound of Silence

Alan Moore: [...] the life of a writer can be a very solitary thing. Unlike some writers, I cannot go and sit in a coffee shop to create. I need complete silence and no interruptions, which leads to a condition of pretty much permanent isolation. In fact, when lockdown started, I thought that if the virus was created in a lab, it would have been by a writer. Lockdown is normal for writers like me.
Never seeing your friends, never going out, hearing from people over the phone intermittently, being in a room on your own in complete silence – this is our existence.

[...] I used to enjoy listening to music when I was a cartoonist but that’s a different thing entirely. Cartooning can be done by some sort of vestigial brain that you have in your wrists. I used to listen to the John Peel show and it wouldn’t affect my cartooning at all. Once you start writing, that all changes.
I realised that I couldn’t listen to anything with lyrics because it would interfere with the words that I was trying to write. I moved on to purely instrumental pieces but was halfway through an album by John McLaughlin when the music was interfering with the rhythms that I was trying to write in. Listening to ambient music lasted a couple of months before I realised that was affecting the atmospheres I was creating. Some of my comic strips from that period feature huge captions focused on the way things sound, all because I was listening to a lot of Brian Eno and Harold Budd.

Eventually I gave in to the silence.

Stream the full course HERE!
Posted by smoky man at 9:35 AM 0 comments

On The Tale of One Bad Rat 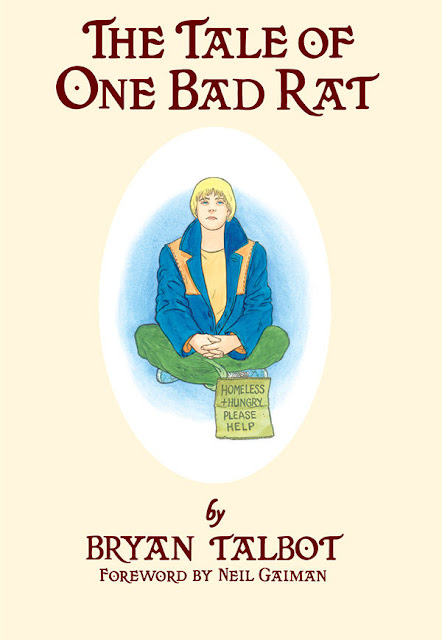 Below, a blurb for the collected edition of Bryan Talbot's excellent The Tale of One Bad Rat. From 2010 edition. Dark Horse Books.

"... an ingenious, intertextual narrative that interweaves the charming, whimsical, and above all, the English vision of Beatrix Potter with a vision of England as it has become; the soft juxtaposed with the savage; Peter Rabbit lost in Cardboard City. Thoroughly excellent."
Alan Moore - Author of Watchmen

Above, a small but excellent sketch card by the extraordinary Brazilian comic book artist, illustrator and graphic novelist Theo Szczepanski featuring our beloved Bearded Author as... The Saint of Comics.
Bonus... Mr. Rorschach, below! Grazie, Theo!
Szczepanski, who is currently living in Italy, has just released his last graphic novel, La Grande Crociata (The Great Crusade), a phenomenal story mixing legendary historical events with a bit of Lovecraft and weird fantasy. Preview HERE! The book is currently available in Italian but I am sure International editions will follow soon, I bet!
For more info about the artist: Instagram - Bio
Posted by smoky man at 3:14 PM 0 comments

Alan Moore: [...] Watch out for anachronisms, as they can pull you out of the period quite forcefully. In Boardwalk Empire, Stephen Graham as Al Capone compared a character with half a tin mask on his face to Frankenstein. Although Mary Shelley had written the novel in 1815, and Thomas Edison had produced a silent short film in 1910, a semi-literate Chicago gangster is not going to be referencing a Mary Shelley novel in 1920. Similarly, Steve Buscemi’s character greets his stepchildren as munchkins. While L. Frank Baum’s novel was written, nobody would have been referencing Wizard Of Oz characters until the MGM film in the thirties. This sort of thing can completely destroy a sense of period. Perhaps not everybody will notice, but there will always be people like me who will and probably bear a grudge against you for the rest of your life. And you don’t want that. [...] 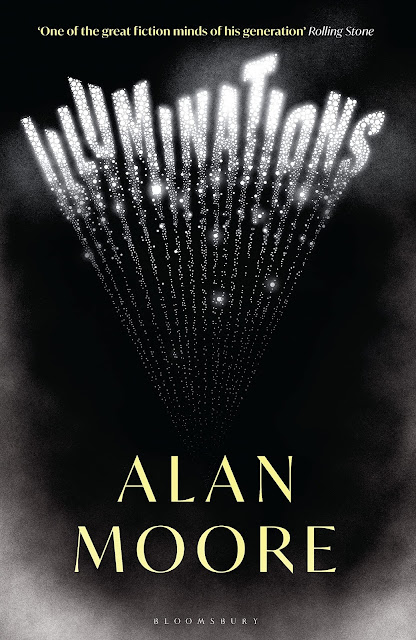 Above, UK cover for Illuminations. Below, US cover version.
The book, published by Bloomsbury, will be available in hardback, eBook and audiobook on 11 October 2022. 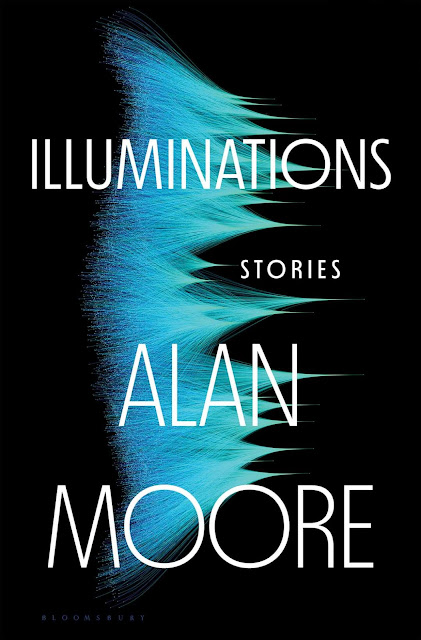 Furthermore, from an interview published on EW.com site:

What is your favorite part of this book?
Alan Moore: I have favourite scenes in every one of the collection's stories, but the one my thoughts keep drifting back to is a brisk, athletic — and, to my mind, intensely moving — swimming sequence in Illuminations' longest piece, "What We Can Know About Thunderman."

What was the hardest plot point or character to write in this book?
The most demanding story — all of it –—was "American Light: An Appreciation," where I first composed a lengthy poem by an imaginary Beat writer, good enough to have credibly restarted his career, and then added critical annotations in a different voice to provide the other half of the narrative. I certainly had to take my coat off for that one.

Write a movie poster tag line for your book.
THE MOST ILL-ADVISED ADAPTATION OF ALL TIME!!!

Read the complete article HERE.
Posted by smoky man at 10:00 AM 0 comments