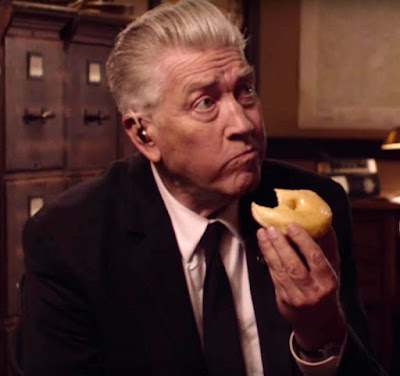 Excerpt from an interview published in August on PaleyMatters.org, HERE.

Alan Moore: Yes, I was a huge admirer of the first two seasons of Twin Peaks. I greatly enjoyed season two’s closing episode, and subsequently arrived at an interpretation of Fire, Walk With Me that, to me, was satisfying and answered all of my really important questions about the series. At the end of last year I watched the box-set of season three, and without wishing to denigrate all of the perfectly legitimate reasons why people loved that (presumably) final season, I’d have to say that with the exception of a few arresting images and atmospheres, I kind of wish I hadn’t bothered. Elements that I either hadn’t noticed or which hadn’t especially bothered me the first time, like the fact that the titular town is presumably twinned with Midsomer in that both have tons of bizarre murders and absolutely no black people, seemed a lot more intrusive in season three.

Another thing that stood out was Lynch’s customary Bizarro-Republican stance, whereby the intrusive supernatural evil in his stories always seems to be firmly rooted in the underclass. Structurally, it also seemed that there was rather a lot of irrelevant padding, notably the slapstick “Dougie Jones” digression, which didn’t seem to have anything atmospherically or thematically to connect it to the main narrative in any meaningful way.

Overall it seemed to me, as a large amount of Lynch’s later work does, to be relying on disconnected set-pieces and ultimately not saying very much. This may, of course, be a fault with me rather than with David Lynch, but while some of the most arresting and affecting moments in Lynch’s work have seemed to be plucked straight from the director’s subconscious mind and dreamlife, the ones that have best worked for me are those moments that, while dreamlike, work within the context of the overall narrative: for me, the dead man who is still standing upright in Blue Velvet or the whole of Henry’s collapsing and hallucinating mental landscape in Eraserhead work perfectly within their contexts, while a golden Laura-Palmer-infused egg sent from another dimension to what is apparently a nuclear test-site, which then hatches into a sort of insect-frog hybrid that subsequently crawls into the mouth of a sleeping young girl who, unless I missed something, is never seen or referred to again, really doesn’t, at least for me. If everything is weird, then, relatively speaking, nothing is weird. All of this is, of course, entirely subjective, and it may well be that the season three of Twin Peaks that I watched was significantly worse than the one everybody else was witness to.

The complete interview is available HERE.
Posted by smoky man at 11:24 PM 0 comments