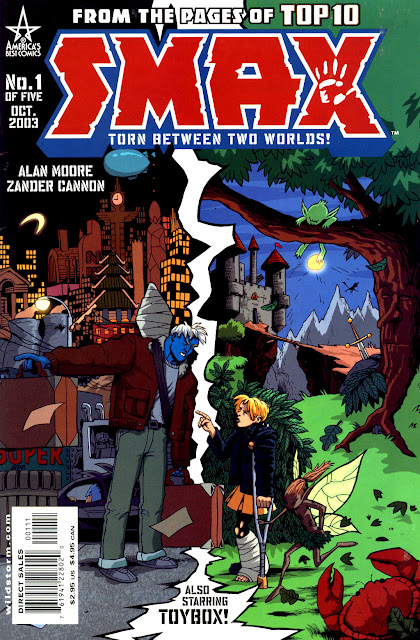 In the past days, I found this text on my archive. I guess it's dated 2002.
By comic book artist ZANDER CANNON.
From www.zandercannon.com (the site in not online anymore, sm)

What's it like working with Alan Moore?
Zander Cannon: The thing about Alan Moore's work that people usually notice is that it's easy to read. Alan has mentioned to me that he likes his scripts to be "artist-proof", a survival technique from his days at 2000 AD, when he would have no idea who would be drawing the next story that he wrote. For that reason, the scripts oftentimes seem as if Alan is hedging his bets (mentioning characters by name more often, describing an object that everyone is already looking at, commenting on the current plot development an extra couple times, etc). There are also unbelievably long descriptions for every panel on every page. He will almost always say where in the panel everything is located, including placing the characters in the same order as their word balloons. The bottom line is: Alan Moore has covered his bottom line. The story is readable almost no matter what. The real advantage to that is that as an artist getting this script, you are free (insofar as Alan Moore cares) to do whatever you want. As long as you get the basic gist of what's described in the panel, the word balloons will pick up the slack. I try very hard in my comics to make them as readable as possible and not rely on these devices, but sometimes when five things need to be happening at once, I'm awfully glad they're there. As far as what Alan is like as a person, he's awfully friendly to talk with (on the phone; I've never met him face to face), and he's enthusiastic as heck about telling stories (sometimes a smidge irritated about comics in general). He's told me some terrific anecdotes; I highly recommend working with him if you ever get the chance.

In principio... Moore in Italian!

Above, cover for In principio - Storie crudeli della Bibbia, art by Italian comic book artist Daniele Caluri. The Italian 128-page volume, to be published by Kleiner Flug/Double Shot in May, contains Outrageous Tales From the Old Testament and Seven Deadly Sins both originally published by Knockabout respectively in 1987 and 1989.
The book includes stories by Alan Moore, Neil Gaiman (both writers are featured in the cover), Bryan Talbot, Dave McKean and others.
Moore's stories are Leviticus with art by Hunt Emerson and Lust illustrated by Mike Matthews.
Posted by smoky man at 5:51 PM 0 comments

Did you remember that unpublished Gen-13 script that was auctioned on eBay some time ago?
Well Brian K Vaughan, co-creator of Y The Last Man and Saga, was victorious at a bid of $3433 for the faxed pages. And now he has decided to share it!

Anyway, rather than hoarding this lost treasure in my BKVault, I thought I would share it with those of you who are kind enough to donate ANY AMOUNT to Bob Wiacek's GoFundMe page (link in bio!). Please just forward your donation receipt to this email: ThanksForHelpingBobW at gmail dot com, and my correspondence wiener dog Hamburger K. Vaughan will eventually send you back a private link to a scan of the script for your personal reading pleasure. Thanks so much for whatever you can do to help, and I hope everyone is staying safe and sane out there.

On fascism and anarchy

Expert from Mythmakers and Lawbreakers: Anarchist Writers on Fiction, edited by Margaret Killjoy, published in 2009 by AK Press.

Alan Moore: [...] it struck me that simple capitalism and communism were not the two poles around which the whole of political thinking revolved. It struck me that two much more representative extremes were to be found in fascism and anarchy.

Now anarchy, on the other hand, is almost starting from the principle that “in diversity, there is strength,” which makes much more sense from the point of view of looking at the natural world. Nature, and the forces of evolution—if you happen to be living in a country where they still believe in the forces of evolution, of course —did not really see fit to follow that “in unity and in uniformity there is strength” idea. If you want to talk about successful species, then you’re talking about bats and beetles; there are thousands of different varieties of different bat and beetle. Certain sorts of tree and bush have diversified so splendidly that there are now thousands of different examples of this basic species. Now you contrast that to something like horses or humans, where there’s one basic type of human, and two maybe three basic types of horses. In terms of the evolutionary tree, we are very bare, denuded branches. The whole program of evolution seems to be to diversify, because in diversity there is strength.

And if you apply that on a social level, then you get something like anarchy. Everybody is recognized as having their own abilities, their own particular agendas, and everybody has their own need to work cooperatively with other people. So it’s conceivable that the same kind of circumstances that obtain in a small human grouping, like a family or like a collection of friends, could be made to obtain in a wider human grouping like a civilization.

So I suppose those are pretty much my thoughts at the moment upon anarchy. Although of course with anarchy, it’s a fairly shifting commodity, so if you ask me tomorrow I might have a different idea.

The whole interview is available HERE.
Posted by smoky man at 8:12 PM 0 comments

On celebrity and teen idols 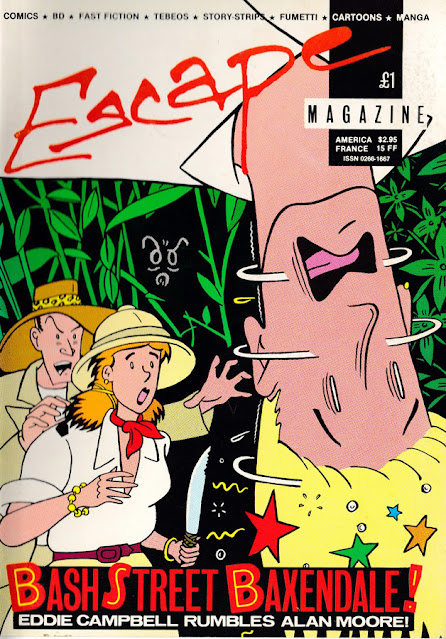 Excerpt from Out on the perimeter, a conversation with Eddie Campbell.
Published in Escape n.5 in 1984.

Eddie Campbell: How do you feel about being considered a celebrity?

Alan Moore: I know it's a bit wingey and whiny but sometimes I wish I didn't get quite the scrutiny that I do. When I started out writing, nobody expected me to be any good, so any good stories I did were seen as being really miraculous. But now if I do a story that's average or dull, then I'm sure most people see it as the beginning of the end. In that respect the relationship between the reader and the artist gets a bit twisted. It's no longer straight communication. It's probably something you've got to put up with.

E: But would you have been happier to remain in anonymity as Curt Vile?

A: Probably not and that just exposes my basic dishonesty! I may bitch about all this, but there is something wrong with the medium at the moment. If there were more good strip creators around, there wouldn't be so much unhealthy importance attached to personalities like Frank Miller or on one level me and on another you. There wouldn't be that Messianic glee and fervour and people would be able to look at the work more honestly and judge it independently of the hype surrounding it.

A: But it's not the same in literature.

E: But it's not so exciting is it?

A: No. It's the youth of the audience that makes what we're doing closer to pop music. Popular culture.

E: Then you have to accept that this is the way it's got to go.

Above, a stunningly beautiful illustration featuring The League of Extraordinary Gentlemen drawn by legendary American comic book artist ADAM HUGHES! The contribution was realized for the now sold-out Alan Moore: Portrait of an Extraordinary Gentleman book (2003, Abiogenesis Press).
At the time, needless to say, we were thrilled to receive such a great contribution, AH!
For more information about Hughes: Twitter page.
Posted by smoky man at 8:21 AM 0 comments

Above, a gorgeous portrait of Alan Moore together with some of the iconic characters he wrote or co-created, drawn by British artist DAVID HITCHCOCK.
You can identify references to: Joker, Dr. Manhattan, Rorschach, V, Sir Gull and Swampy. Well done, David! Well done!
For more info about Hitchcock: blog - Facebook page
Posted by smoky man at 9:30 AM 0 comments

On his Instagram account, writer and artist Jeff Lemire shared pictures of some shelves in his studio.
Above a selection of Moore books: it's a real pleasure to see up there Gary & Omar and my Alan Moore: Portrait book!
Posted by smoky man at 9:30 AM 0 comments 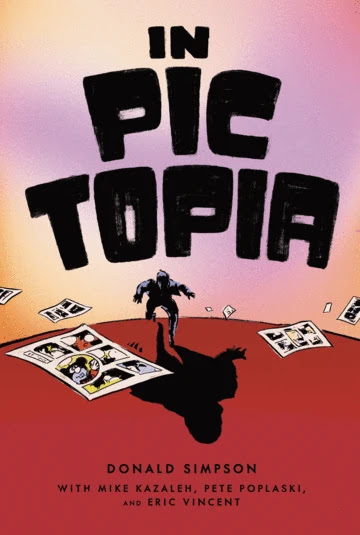 This April, Fantagraphics will reprint In Pictopia (without the exclamation mark), a fundamental short story written by Moore and originally published in 1986 on Anything Goes! n.2. Per Moore request his name will not be mentioned in the book.

In Pictopia is the legendary comic created in 1986, written by the era’s most adventurous mainstream comics writer and drawn by a bevy of indie cartoonists—helmed by Don Simpson, with Mike Kazaleh, Pete Poplaski, and Eric Vincent. Presented here for the first time, scanned from the original line art and full-color painted boards, in an appropriately oversized format. Pictopia is the allegorical city inhabited by old, forgotten, but once famous and iconic comics characters, now considered pitiable has-beens by the popular new comics characters who are cheerfully and inevitably taking their places in the pop culture pantheon of celebrity. It is both a paean to timeless, beloved comics characters and a scathing critique of the then-contemporary comics sub-culture.