Above, an amazingly powerful portrait of Alan Moore drawn by Italian comics artist and illustrator Tiziano Angri for my personal collection.

Dr. Manhattan and the Metabaron by Juan Giménez 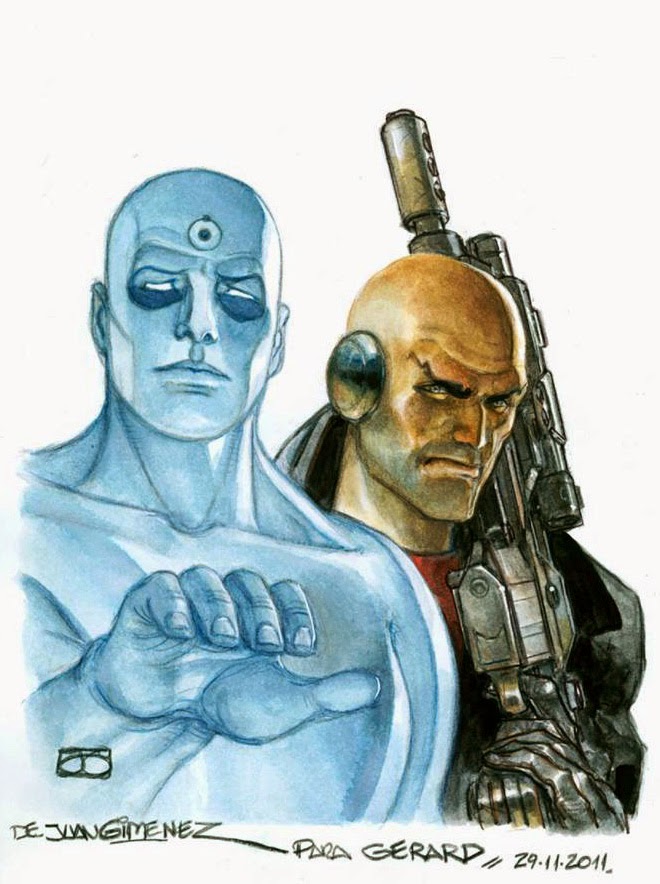 Above, an awesome illustration by Internationally acclaimed artist Juan Giménez featuring Dr. Manhattan and Othon the Metabaron. It is a commission realized for collector Gerard Nadal.
Posted by smoky man at 3:38 PM 0 comments

Moore talks about his... influence upon comics

Excerpt from an interview conducted by Alan David Doane in 2004.
The complete interview is available here.

You’re seen by many as a key figure in the history of comics and I’m wondering if you’d talk a little bit about what ways that you saw your career intersecting with, and affecting the course, of the comics industry in the time that you spent in it.
Alan Moore: Well, my original intention was simply to try and scrape a very modest living as a kind of sub-underground cartoonist. I found within a couple of years that I was never going to be able to draw well enough, to my own satisfaction or quickly enough, to be able to carry out a career as an artist. At this point, I decided to maybe try writing, because I thought that I was perhaps I was better at that than I would be at actually drawing the pictures that go with it. So, I launched on a career as a writer and, from the very beginning, I had a couple of simple precepts, if you like…I decided that I was never going to write a story that I, personally, wasn’t interested in. I figured that this would be a helpful dividing line to prevent me from sliding into hack-work, which is always a danger in an industry where the deadlines come fast and furious. So, I kind of developed a method by which I would take…even on promising material, and then make it into something that was fun for me, that was either amusing or intellectually stimulating or, you know, that my use of language or storytelling or something like that…there some element in the story that would provide me with sufficient motivation to do a good job on it.

And by simply following that agenda, I found myself fairly rapidly in demand over here and then I was, swiftly thereafter, head-hunted by DC Comics and asked to write Swamp Thing and I simply carried on doing the same thing that I’d been doing, in that I would try to make whatever I was given interesting from my own point of view, because my feeling is that if I’m not interested in the work, then I can’t expect the reader to be. That just seems to be obvious, that there’s something about the writer’s enthusiasm that communicates to the reader. I think that readers know if a particular piece of writing is being a joyless slog for the writer because that becomes obvious.

So, in order to make these things interesting to me, I found that I was having to radicalize them. I expected this to probably cause more trouble than it did to start with, but I found that the readers were responding to it and so I found that encouraging. So I carried on doing it only moreso and I got a lot of support from Karen Berger and the other people at DC at that time and they seemed to like the fact that the book was gaining in sales figures every month; it seemed to indicate that we were doing something right. So, I was encouraged to push it as far as I wanted and that’s, luckily, the sort of situation that I’ve enjoyed in comics ever since. I think people trust me to know that I’m probably going somewhere that’s at least interesting, you know, it might be a bit mad or disturbing or something like that, but it’ll probably be somewhere interesting. And, if I’m just left to my own devices, I probably won’t scare the horses too much and I’ll probably bring in a good end result.

And, as for how that’s affected comics, I really don’t know. Sometimes, on my darker days, I tend to feel that most of my influence upon comics has been negative, that perhaps people who read the early Swamp Thing or Watchmen or a lot of the work that I was doing in the ’80s, that what they took from it wasn’t its urge to experiment or its urge to stretch the limits of the form and the medium. It seems that perhaps what a lot of them took from it was the violence, a certain kind of intellectual posture…a few other things, and it seemed to condemn comics to a lot of very depressing and grim post-Watchmen comic books. Maybe that’s too bleak, like I say, it depends from day to day, it depends what sort of mood I’m in and you’ve caught me on a tired day today, so, I’m perhaps being a bit pessimistic there.

I mean, I’d like to think that if I’ve shown anything, it’s that comics are the medium of almost inexhaustible possibilities, that there have been…there are great comics yet to be written. There are things to be done with this medium that have not been done, that people maybe haven’t even dreamed about trying. And, if I’ve had any benign influence upon comics, I would hope that it would be along those lines; that anything is possible if you approach the material in the right way. You can do some extraordinary things with a mixture of words and pictures. It’s just a matter of being diligent enough and perceptive enough and working hard enough, continually honing your talent until it’s sharp enough to do the job that you require. I hope that if I had any sort of benign legacy at all, that that would be it, but I don’t know, I think that my legacy, some days, like I say, I think that my legacy is more likely to be a lot of humourless snarling, sarcastic psychopaths, but that’s just on my black days, pay me no mind.
[the complete interview is available here]
Posted by smoky man at 3:32 PM 2 comments

Constantine by Camuncoli and Palmiotti