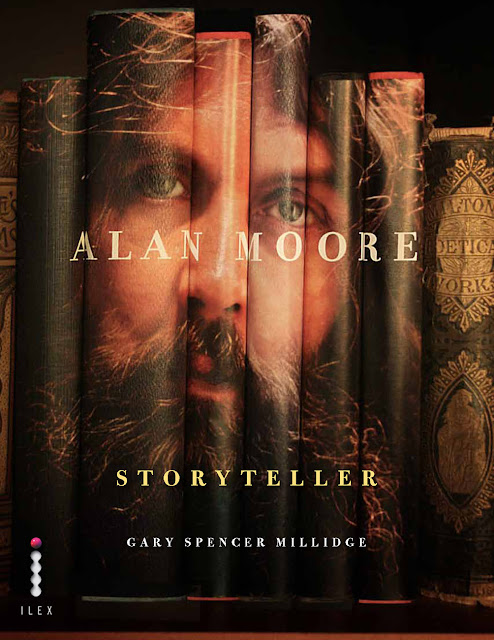 In the previous post I had a brief chat with Gary Spencer Millidge about his upcoming book Alan Moore: Storyteller (it will be published this summer by Ilex Press).
In the following you can see some previous pages from the book. Other pages can be seen at Millidge's blog.
In the post opening image, you can admire the final book cover: photography by José Villarrubia, design by Chip Kidd.
Enjoy... and don't forget to pre-order the volume!!! 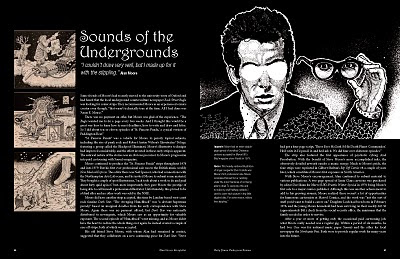 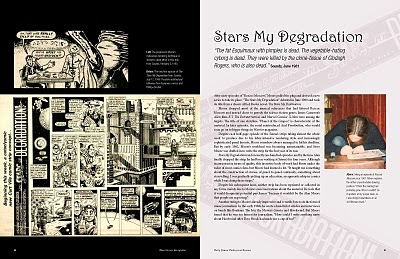 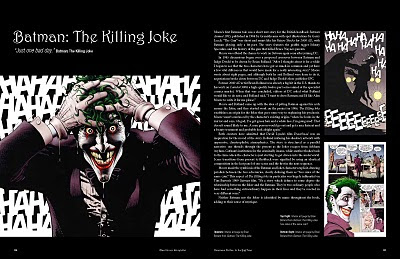 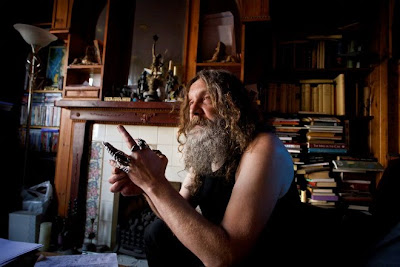 This summer Ilex Press will release Alan Moore: Storyteller by Gary Spencer Millidge. The book promises to be the definitive volume about Moore and a must-have for any fan of the Bard of Northampton.
Ilex 2011 catalogue can be seen and downloaded at Issuu. Alan Moore: Storyteller is at page 28. The volume is currently scheduled for early July release.

Gary Spencer Millidge is the author of the acclaimed series Strangehaven and together we edited the 2003 Alan Moore: Portrait of and Extraordinary Gentleman tribute book. He already talked about Storyteller in his own blog.

In the following a brief chat with Gary about this new Moore-related project.

smoky man: How did you start working on an other Moore-related project, after our Portrait? Previously you did a book focused on comics design...
Gary Spencer Millidge: I wrote Comic Book Design for Ilex Press in 2008, and the commissioning editor Tim Pilcher called me at the end of 2009 to ask me to create some sample pages for a potential Alan Moore biography. I was commissioned to write the book in the spring of 2010.

Can you reveal us details about the actual content of the book? It seems to be as an enhanced biography of sort, doesn't it?
It's what I think the publishers call a visual biography. It mainly concerns a survey of the entirety of Moore's works in some depth, profusely illustrated, but also contains a detailed biography, particularly of his early life. The book also goes into some detail about his music, performance, prose and illustration work, as well as his personal views opinions and philosophies on magic, politics, drug use and of course the Hollywood system.

What about the CD included in?
The audio CD included with the book is a collection of tracks spanning Moore's musical and audio career, containing tracks from each of his major recorded projects, as well as a number of unreleased songs, including the infamous Emperors of Ice Cream track, Mr. A. All 19 tracks have been professionally remastered by Gary Lloyd, Moore's collaborator on the audio version of  Brought to Light.

What will Moore longtime fans will find in the book? And, what's about the general comics audience? And for a "common" person maybe attracted by Moore's name related to movies?
As well as providing the most accurate and comprehensive biography of Moore to date, the book will include a great deal of rare and never previously published material. This includes a reproduction of the much rumoured Big Numbers chart, many personal family photographs, excerpts from Moore's personal notebooks (including sketches and notes for From Hell and Lost Girls), and unseen/unillustrated script for an episode of V for Vendetta, unseen art from Captain Britain and Watchmen and much more.
There's also a gatefold timeline and bibliography which puts all of Moore's works into chronological context.

What's about the involvement of Alan Moore himself in the whole project? It's a fact that Moore has a strong ethic related to his works and his own persona, so... I think he really trusted you... for this book, I mean...
Alan Moore has given me his utmost co-operation in the production of this book, making himself available for interviews in person and by phone, as well as providing the photographs, notebooks and audio recordings as described above; in addition, he has checked my manuscript to ensure every accuracy.

You well know Moore and its works but... What did you find out that surprised you working on the book? Maybe doing researches or talking with Moore..
The quality, diversity and prolificacy of Moore's work is more astonishing that I previously thought. Revisiting even his earlier material proved the depth and breath of his writing skills. Having access to his notebooks was a revelation. It was amazing how much like my own or any other writers these notebooks are; which proves that there is no secret magical techniques employed, just a massive intellect and a vast amount of hard work.

You spent many months working on this. I thinks it can also be defined as a "labour of love" on an Author you have the highest respect and admiration for.... What are your expectation in terms of critical and commercial response?
I don't have any expectations, as it will be Moore's name that sells the book, not mine. It was a labour of love in the sense that everything I do, I try to do my best. Hopefully the book will enhance Moore's reputation and open another door for him to be able to create another masterwork.

In conclusion, I can't avoid to ask this last question. Any possibility to see some new Strangehaven issue/material in the upcoming future? :)
It's a pretty simple equation of time and money. The amount of time I spend on Strangehaven cannot really be compensated for financially in the current economic climate. I still intend to find a solution that will enable me to continue and conclude the series as soon as I am able, and I won't make any further announcements until I have some concrete news.

Here the Italian version of this post.
Posted by smoky man at 1:07 PM 2 comments