Above, the final panels from the Three-Eyes McGurk and His Death Planet Commandos story originally printed in "Dark Star" n. 22-25, published by Dark Star Publishing in 1979-1980. It was reprinted in 1981 in Rip Off Comix n. 8. Art by Curt Vile (a.k.a Alan Moore), story & inks by Pedro Henry (a.k.a Steve Moore).

You can see the similarities, can't you? :) 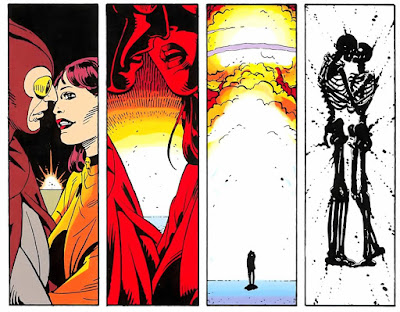 Behold the Beholder by Alberto Corradi

Above a hypnotic portrait of our Bearded Magus by Italian cartoonist, illustrator, visual artist and monster maker ALBERTO CORRADI. I can also see a bit of... a famous Roman artefact in there, Alberto!

He knows the score... by Thomas Campi

Above, a great and intense watercolour portrait of Moore by award-winning Italian artist THOMAS CAMPI.

More about Campi and his awesome Art HERE at his site.

The Watching Man by Marco Corona

More info regarding Corona at his blog, HERE (in Italian).
Posted by smoky man at 10:38 AM 0 comments

Above a stunning, hairy portrait of Alan Moore by extraordinary artist GREG RUTH, created for his Recursive project.
He says: "Recursive is an experiment in single line contour drawing using my old frenemy, the ballpoint pen. This project is simply put, a real-time exploration of a new technique using this old tool through my usual passion for portraits. Some pieces are intentional, others are found through the act of drawing. [...]"

And specifically about Moore, Ruth writes: "The White Wizard of comics storytelling and his magnificent attack eyebrows made this an easy subject and an essential one as well. Alan Moore is largely responsible for my becoming entranced by the medium and storytelling power of comics and is largely to blame for why I keep trying at it to this day. This one's for you, buddy."

More about Ruth and his mesmerizing Art, HERE.
Posted by smoky man at 11:13 AM 0 comments

Blast form the past! Excerpt from an interview published on Off Centre n.1, October 1989.

What advice would you give to young (or old) people starting out in the "comics biz" – lunge at the majors, or stick with independent bastions of integrity?
Alan Moore: I can't really give much specific advice, because I believe that everybody must find their own path based upon what he or she wants out of the medium.

If you want to create your own work without compromising anything at all, then you should probably stick to the hard and narrow path of self-publishing, or independent publishing, even on a small-time basis. If on the other hand you want to make money and gain a certain degree of influence within the industry, you're more likely to do this by pitching yourself at Marvel, D.C. or Fleetway. Both have their advantages and drawbacks, and in the end it's down to the individual person.
What I would advise is that you consider all the other places that might be willing to run comic strips; places that fall into neither of the above categories. I spent two years learning the rudiment of storytelling by doing strips for music weeklies and regional newspapers. Hunt Emerson works for Fiesta. Brian Bolland started out doing work for the underground magazine OZ. Dave Gibbons for the underground weekly I.T. Crumb did greeting cards and Robert Williams worked for a hot rod magazine.

What I’m saying basically is that you're on your own in terms of what choice you eventually make, but at least be sure that you've considered the whole range of choices actually open to you. (Another good thing about doing comic work off the beaten track is that the competition is often less intense. And yet another is that if your early work turns out to be crap, very few comic fans will have seen it and your reputation will thus be reasonably intact.)
Posted by smoky man at 1:13 PM 0 comments

Above, a psychedelic pink portrait of Moore evoked in our reality by the powerful powers of SPUGNA (a.ka. Tommaso Di Spigna), Italian color wizard, comic book artist and illustrator.
Thank you fearless Spugna for this great summoning!

For more info about Spugna: Tumblr - Blog
Posted by smoky man at 11:59 AM 0 comments