Above, the Scorpion Moore, the original ink version, by Italian comics Maestro ONOFRIO CATACCHIO. You can also admire the colour version HERE.

In the past weeks I successfully performed a magic ritual so the artist spontaneously sent me his fantastic original art. Grazie mille, Onofrio! :)

Eddie Campbell on The Birth Caul 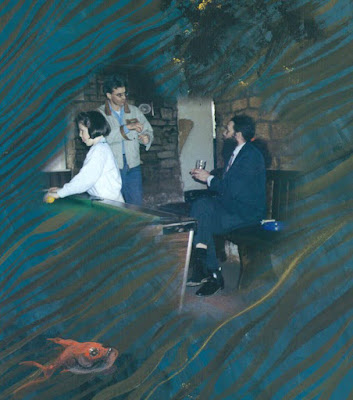 Excerpt from an interview I did in 2000 published on my Ultrazine.org (not online anymore).

EDDIE CAMPBELL: The Birth Caul is the best thing that Alan has ever written. He wrote it as a theatrical performance monologue which he performed in the old county court house in Newcastle-Upon-Tyne on his 40th birthday. It was recorded and released as a CD and subsequently we adapted it into a comic.
It is a dark and profound piece of poetry which made extraordinary demands upon me as an artist, particularly the chapters on childhood where he has re-created perfectly more than anything else I have ever read the feelings of growing up.
I had to come up with many unusual solutions to the problems of matching images to such an elusive text. In one instance I smashed up an alarm clock and glued parts of it to the page. In another I stitched together a miniature pair of child's pajamas and glued them to the page.
Posted by smoky man at 12:54 PM 0 comments

Above, a recent portrait of Alan Moore as a cyclops by poet, sculptor, writer, performance artist, and educator Brian Catling.

"[...] a revealing portrayal of a well-known warlock from Northampton, celebrating the singularity of his genius."

Above, the (rarely seen) stunning illustration drawn by superstar artist JIM LEE as contribution to the sold-out  Alan Moore: Portrait of an Extraordinary Gentleman, published in 2003 by Abiogenesis on the occasion of Moore's 50th birthday.

I remember we received the art at the very last moment, probably just few days before going to print and... we were totally blew away by it!