Above and below, some examples of the fantastic lettering created by TODD KLEIN for Alan Moore's Supreme run.
Award-winning Todd Klein is unanimously considered one of the best letterers in comics history.
The pictures shown here are from Kristof Spaey's CAF page.
"I really wanted some samples of Todd Klein's hand lettering. He's one of my favorite letterers in comics. [...] Todd still had a small batch of Supreme lettering overlays in his archive and I picked them all up. Great fun to be able to study them up close. Alan Moore's run on Supreme was phenomenal. Serving as an homage to the golden age and Superman specifically but works also as a commentary on the comics medium in general."
More Supreme lettering overlays by Todd Klein are available there. 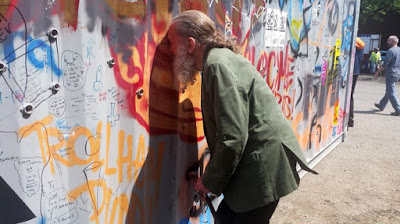 The Northants Herald and Post reported that on the 9th of June Alan Moore visited Aftermath Dislocation Principle, the art installation created by artist Jimmy Cauty for Bansky's Dismaland which has been pulled into a car park in Northampton.
From Cauty's site: "Housed in a 40 ft shipping container, The Aftermath Dislocation Principle (ADP) is a monumental post-riot landscape in miniature. This dystopian model village is set somewhere in Bedfordshire, where only the police and media teams remain in an otherwise deserted, wrecked and dislocated land – all in 1:87 scale and viewed through peepholes in the side of the container." 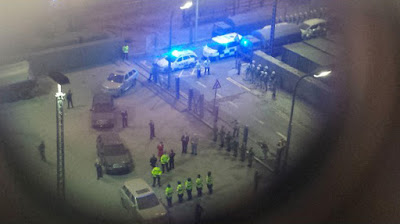 Moore was amazed by the installation and told the Northants Herald and Post that it was one of the best he had ever seen. "This is up there among the best, without a doubt," he said. "This is a brilliant expression of modern England. I think that it is a really brave piece of work and a really serious piece of art."

"[...] What Jimmy's installation shows is a very credible, possible outcome for the real world that we live in. [...] The biggest issues are that we have an environmental crisis that is getting worse - the longer we continue to do nothing about it.

We have a global crisis where you've got post-national movements like ISIS which are arising from our very complex global situation. We have a world that is changing around us more rapidly than any others can keep up with.

There is a very strong sense that the people in control in the world, the people in control of the money, that their main programme is to accumulate more money at whatever cost. So in a situation like that, which seems to be insistent upon propagating itself, then that will inevitably end up in a situation like this - which Cauty has depicted perfectly." 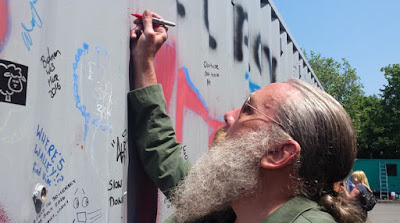 How to write superheroes by Darko Macan

From page 289 of the sold-out Alan Moore: Portrait of an Extraordinary Gentleman (2003, Abiogenesis Press) which celebrated Moore's 50th birthday, below you can read the contribution written by the Croatian comic book writer and illustrator DARKO MACAN.

Posted on this blog with the author's permission.
Macan's official site here. (Croatian)
How to write superheroes
by Darko Macan

Ade Capone and... a reader's view

From the sold-out Alan Moore: Portrait of an Extraordinary Gentleman book (2003, Abiogenesis Press, page 171), below you can read the contribution written in 2002 by well-known Italian comic book creator and television author ADE CAPONE to celebrate Alan Moore's 50th birthday.
In the mid ‘90s Capone translated and edited the Italian edition of Alan Moore’s run on WildC.A.T.S. Capone prematurely died in 2015: a great loss for the Italian creative community.
A READER’S VIEW
by Ade Capone
Everybody has written about Alan Moore, everything and its opposite. Therefore, I don’t think I can add anything new, though I have read the English writer’s work since the ‘80s, both as reader and as writer, trying to pinch a trick or two from the author of V for Vendetta.

One cannot deny that there is much to learn from reading Moore’s works. What fascinates me the most is his ability to translate science into poetry. Think about Dr. Manhattan in Watchmen and the quote of the watchmaker Einstein.

Or WildC.A.T.S.’ android, Spartan, who flies into the night, listening to every single sound, including the electrons in their quantum orbits. This was from a splash-page that I had the honour to translate for the Italian edition of the comic book, realizing how impossible it was to find a proper equivalent for sentences that sound in English, thanks to his precise terminology, just like music. Besides, every story by Moore is, in some sense, rock music; and Moore himself, in photographs, looks very much like a ‘70s rock-star, with his lucid and bohemian creative madness, which expresses itself perfectly in his two main narrative themes; one based on superheroes, the other on Old England. The League of Extraordinary Gentlemen is, in a sense, the union of the two.

But let’s talk about the straight superheroes. Alan Moore has been a master in the superheroic arena, because with Watchmen (and, indeed, The Killing Joke) he wrote the definitive superhero story, mercilessly exposing their (super) human miseries. The fact is, in my opinion as a reader (as a writer I would not dare to express such a judgement), the story was, above all, definitive of the writer. And the proof is (again, in my opinion as a reader) that he was only able to reach such artistic heights again with From Hell, which was not about superheroes. His WildC.A.T.S. run was wonderful, that’s true. And many things in ABC Comics are valuable. But they are not Watchmen, and they could not be, for the aforementioned reason. It’s not surprising that, despite the excessive praise of critics too often looking at the author’s name rather than the work itself, none of these more recent works have matched the sales and the success of Watchmen. And as far as I am concerned, the public is always right, especially when it’s a public without any preconceptions against the new product of a great author. To put it simply, they liked these new things less because you can create a character like Dr. Manhattan (and company) once in your life, assuming you have enough genius. From Hell, on the other hand, being free from comparison to previous works, allowed Moore to free his genius once more, helped by the art of an Eddie Campbell who was at his peak and perfectly tuned to the script.

Speaking as a writer, there’s this to say, too; a writer, in his entire career, meets two, three at most, artists able to precisely render his soul. The others, good as they may be, will never be able to attain that full symbiosis which is necessary to create a masterwork. Alan Moore, the “extraordinary writer” halfway between steam engines and quantum physics, found the other half of his creative coin in Dave Gibbons and Eddie Campbell. And those aren’t people able or willing to bind themselves to periodical publication, with fixed deadlines, like the ABC line. Someone who possibly could have been Moore’s third “ideal artist” was Travis Charest, the initial artist on his WildC.A.T.S. run. Sponsored by Star Comics at the Expocartoon convention in Rome, Travis told me how he was perfectly comfortable with Moore’s very precise scripts. I thought that was odd, Travis being an artist who tends towards less detailed artwork (unlike, say, a Gibbons). We were at a dinner, the wine of the Roman Castles loosened our tongues. Laughing, Travis told me I was right. And that Moore did know that perfectly, too. But he set him totally free, putting the smallest details in the script anyway, so that Charest could “skip” them to obtain a more terse effect. Look (read!) those issues of WildC.A.T.S., and you’ll see how Travis managed it. Regrettably, his timetables didn’t match the deadlines, and he had to leave the book. He did nothing else with Moore, and not much else in general.

Art and serialisation: a problem as old as the world, and probably with no solution. I think Alan Moore knows this all too well.

Happy birthday, Alan… and thank you! 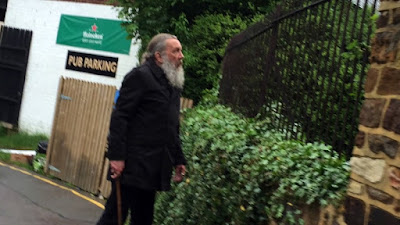 Award-winning audiobook narrator and actor  SIMON VANCE is working on Jerusalem audiobook. So in the past days he flew to Northampton to meet Alan Moore and talk with him about the book and all its secrets.

Personally I can't wait to read the book and... listen to the audiobook too!
Posted by smoky man at 1:13 PM 3 comments

The Queen of Spain likes Providence 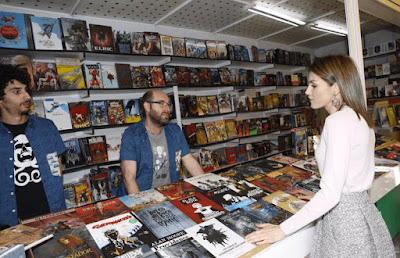 As reported by El Pais, during the latest Madrid Book Fair, the Queen of Spain bought a copy of... Alan Moore and Jacen Burrows' Providence.