The image is contained only in the Italian edition.

Hereunder you can read the poetry written by worldwide acclaimed writer NEIL GAIMAN as contribution to Alan Moore: Portrait of an Extraordinary Gentleman, a book published in 2003 to celebrate Moore's 50th birthday.


Posted on this blog with the author's permission.

The Scorpio Boys in the city of Lux sing their strange songs
and smear the windows of your car with cheap rags,piss on your doorstep.
It's lucky to see them. If you see them you won't die today.

There's an old man. He's all that stands between us and the End of the World.
The End of the World knocks on his door once or twice a week,
they have cake and tea and a chat, and crumpets in the winter, and a battle of wits.
So far the old man is winning, the world only ends every now and again.
We don't remember it ending. We're from this go around.

Oh, they stare, the Scorpio Boys, it's an act of magic of course
if you believe in them at all. If you see them you'll be lucky. So damn lucky.

Beaten up and left for dead by the Piltdown Men
singing *we are we are the Piltdown men we are we are*
they stumble down the roads of the cities of twilight
breaking bottles and puking in gutters,
someone finds you and picks you up and carries you home.
Maybe it was us. You never know.

A cigarette traces a shape in the air,
Something made out of light and smoke, so you know it's magical
someone says it's lucky and who knows what will happen?
Stranger things happen in cities. Even small cities.

Take Lux, for example: a city that isn't even there,
Like all cities it is a magical description,
a way of making impossible things happen at a distance,

like a poem or a whisper or a saucer filled with ink --
you can stare into it, or dip your pen.
Either way it will take you to invisible places,
open a door in your hearts to us,
sharp-nosed and shabby genteel, with ink-spots and cinder-burns on our clothes.

When there are enough of us, we will become a city.

Doing it because we believe in it. Because the stories need to be described.
And come to us for their faces.

Alan Moore and the gods

Excerpt from an interview conducted by Matthew De Abaitua in 1998.
The complete interview can be read here.

Alan Moore: In my own experience – and this is where we get into the complete madness here – I have only met about four gods, a couple of other classes of entity as well. I’m quite prepared to admit this might have been a hallucination. On most of the instances I was on hallucinogenic drugs. That’s the logical explanation – that it was purely an hallucinatory experience. I can only talk about my subjective experience however, and the fact that having had some experience of hallucinations over the last twenty-five years or so, I’d have to say that it seemed to me to be a different class of hallucination. It seemed to me to be outside of me. It seemed to be real. It is a terrifying experience, and a wonderful one, all at once – it is everything you’d imagine it to be. As a result of this, there is one particular entity that I feel a particular affinity with. There is late Roman snake god, called Glycon, he was an invention of the False Prophet Alexander. Which is a lousy name to go into business under. He had an image problem. He could have done with a spin doctor there.

Anyway, the False Prophet Alexander is a Moon and Serpent hero, a saint if you like. He was running what seemed to be a travelling Selene medicine show, he would do a performance of the mysteries of the goddess Soi. The only reference to him is in the works of Lucien, who calls him a complete charlatan and fraud. At some point, Alexander the False Prophet said he was going to preside over the second coming of the god Asclepius, the serpent god of medicine. He said this is going to happen at noon tomorrow, in the marketplace. So everyone said ‘sounds good’ and they all went down there. After a little while, they said “come on, False Prophet Alexander, where is the second coming of Asclepius?” At which point, The False Prophet Alexander bent down, reached into a puddle at his feet, pulled up an egg, split it with his thumbnail, and there was a tiny snake inside, and said “Behold, the new Asclepius”, took it home with him, where over a week it apparently grew to a prodigious size until it was taller than a man, and had the head and features of a man. It had long blonde hair, ears, eyelids, a nose. At this point he started to exhibit it in his temple, providing religious meeting with this incarnate god. At which point Lucian said, it was obvious, I could have done that. Lucian is another James Randi, you know, I could have done that, he got the snake’s head under his arm, speaking tube over his shoulder, child’s play. And he’s probably right, that’s probably how he did it. If I’m going to adopt a god, I’d rather know starting out that it was a glove puppet. To me it’s a real god, there’s nothing that precludes a glove puppet from being a real god. How else would you explain the cult of Sooty? But a god is the idea of a god. The idea of a god is a god. The idea of Glycon is Glycon, if I can enhance that idea with an anaconda and a speaking tube, fair enough. I am unlikely to start believing that this glove puppet created the universe. It’s a fiction, all gods are fiction. It’s just that I happen to think that fiction’s real. Or that it has its own reality, that is just as valid as ours. I happen to believe that most of the important things in the material world start out as fiction. That everything around us was once fiction – before there was the table there was the idea of a table, and the idea of a table before tables was fiction. This is the most important world, the world of fictional things. That’s the world where all this starts. So I had an experience which seems to be an experience of this made-up, Basil-Brush type entity. It was devastating.

The complete interview is available here.
Posted by smoky man at 10:13 AM 0 comments

Rob Williams and... The Fury


In the following you can read the contribution written by British comic book writer ROB WILLIAMS.

For more info about him and his works, visit his site: here.

Allow me to introduce you to The Fury
© Rob Williams

1983. I was 12-years-old. I liked comics. I liked bright, fun comics about super heroes who hit each other a lot. Justice League, Avengers, that type of thing. I liked Roy Of The Rovers, Whizzer And Chips and the Victor Book For Boys. I LIKED comics. Understand?

And then I got hold of a copy of Daredevils #1, and suddenly I loved comics.

Now, I wasn’t sophisticated enough at the time to work out why these stories were better than anything else I had read up to that point – I just knew that they were. In the same way that I vaguely knew at the time that I had funny feelings about Erin Grey and her tight jump suits in Buck Rogers in the 25th Century.

I knew that I liked Alan Davis’ artwork a lot. I also knew then that the Fury scared the life out of me. It still does.

As a writer you’re always looking for a character’s high concept – to clarify for the readers what their motivations are. 20 years on, you can’t get much more high concept than The Fury.

It is immensely strong, utterly ruthless, with the “logic of a computer. Intuition of a dog.” It never stops. It keeps coming. “It runs like a retarded child” (Moore made us imagine how horribly it moves – how many comic writers do that?). It has a purity to it. It cares about nothing. Is distracted by nothing. It murders. It is the stuff of nightmares.

Reading the trade paperback of Captain Britain now The Fury still makes me feel like wetting myself with fear as poor Linda McQuillan did back then. It kills super-heroes? Yes. But it also made super-heroes better than they’ve ever been. 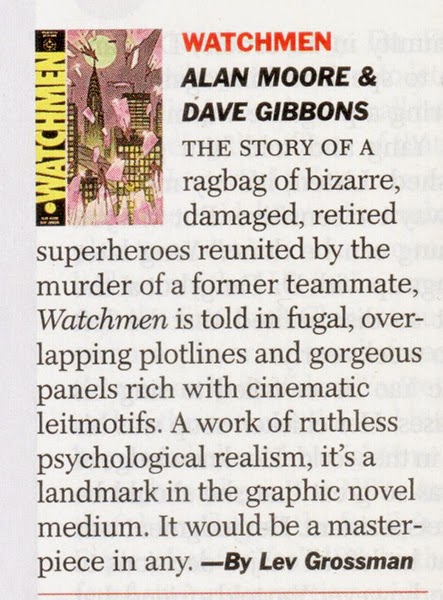 "A work of ruthless psychological realism."

From the list compiled by Time critics Lev Grossman and Richard Lacayo in 2005.
The complete list can be read here. It only includes works written in English and published between 1923 (when Time was first published) and 2005 (when the list was compiled).