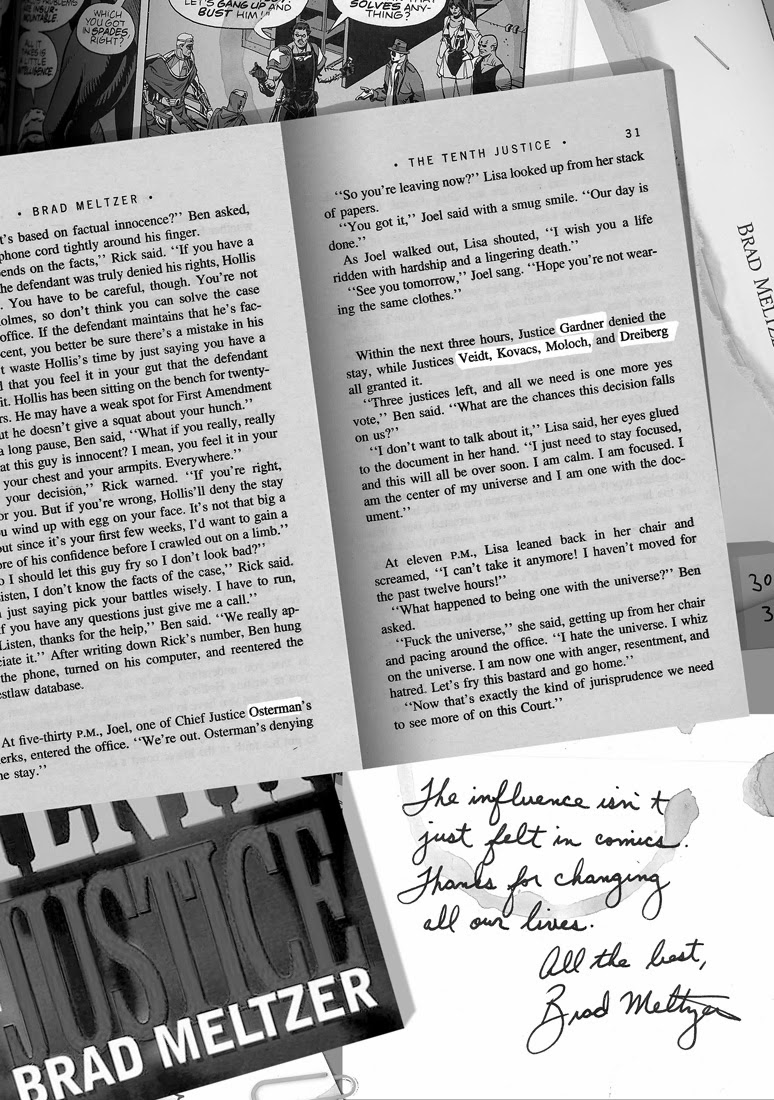 From Alan Moore: Portrait of an Extraordinary Gentleman, page 31.

Above, you can read the hand written contribution by acclaimed writer Brad Meltzer:
"The influence isn't just felt in comics. Thanks for changing all our lives."

His Heavy Heart's trailer is out there!

Nemo: The Roses Of Berlin, is coming soon from Top Shelf Comix & Knockabout in March.

And... Gosh! Comics is offering an exclusive giclée print signed by Kevin O’Neill to coincide with the release of the book. There are just 40 copies available so... hurry up (and click here)!!!
Posted by smoky man at 8:29 PM 0 comments

From Neil Gaiman's Journal post dated 7th of February 2014.
"I ran into Dave Gibbons in Las Vegas in early December [2013], and he told me about a book they were putting together showcasing Watchmen original art. I reminded Dave that he and Alan had given me a page as a thank you when we were all much younger, and he suggested I might put it in the book.

As Dave says on this interview page...

I was talking to Neil Gaiman a couple of weeks ago - managed to have a catch-up with him over a cup of tea, which was great - and I mentioned this project [IDW’s forthcoming “Watchmen Artifact Edition”] to him and he’s got one particularly prime page that Alan (Moore) and I gave him back in the day when he used to help us with sourcing quotations and so on. He’s got the dream sequence - the Nite Owl dream sequence where there are, I think, like 20 panels on the page. So that’s a real iconic and favorite page.

[The complete Gibbons interview can be read here.]"

Reading the following lines you can better understand the reason why Moore and Gibbons gave a Watchmen page to Gaiman.

Excerpt from an interview with Neil Gaiman conducted in 1989 by Brian Hibbs, owner of San Francisco’s Comix Experience.

Comix Experience: You’re listed in the credits of the Watchmen and Elektra paperbacks as “Special thanks to…” What gives? Have you been secretly plotting the course of western civilization’s comics these last few years?

Neil Gaiman: Yeah. I’m actually one of the secret masters. It’s the Gnomes of Zurich and me.
No, no… I remember Alan ringing me up when he was writing Watchmen #3, and said, “Neil, you’re an educated bloke. Where does the quote `Shall not the judge of all the earth do right?’ come from? I think someone said it when they were dying, but I don’t know when.” I went out, and found it for him, rang him back, and said, “No. It’s Genesis. God threatening to nuke Sodom and Gommorah.” He said, “Thanks”, then went off.
He rang me back a few months later and said, “Neil, I haven’t any quotes for the titles of #7 and #8. This is what happens in them, go find me a quote.” So I went off and got him “Brother to dragons, and companion to owls…” from Job for #7, and the poem for #8, Eleanor Farjeon’s “Hallowe’en”. “On Hallowe’en the old ghosts come.”
Also, while I was researching the Old Testament stuff, I was working my way through a huge Biblical concordance, getting various details. It fell open to a page on obscure history, and the name Rameses jumped out at me. I discovered this quote that said, roughly, “I’ve killed all these places, and left the widows weeping there. Everything is at peace, and everything is great in the world.” So I rang up Alan, and said, “What do you think of this?” He said “Great! I’ll stick it in #12″ So you’ve got Ozymandius quoting Rameses in Watchmen. (ED: #12, Pg. 20)
[The complete interview can be read here.]
Posted by smoky man at 9:44 PM 0 comments

From Alan Moore: Portrait of an Extraordinary Gentleman, the sold-out tribute book published by Abiogenesis Press in 2003.

In the following you can read the poignant and funny contribution written by British artist John Higgins, who did an amazing work colouring both Watchmen and The Killing Joke. The piece was originally printed at page 297 of the book.
Higgins also contributed with the illustration you can see above (page 296).

Posted on this blog with Higgins' permission.
More info and news about Higgins on his website: here.

Alan Moore at a comic convention in London in the mid-1980’s at the start of the WATCHMEN phenomenon, dressed (in his usual understated style) in a candy-striped suit. He is the star attraction of the convention, and the centre of attention for hundreds of comics fans and fellow professionals a like.

Everyone wants a bit of his time, but Alan had decided the most important person there was a bored six-year-old girl at her first comics convention. She doesn¹t know or care who the hell this hirsute and interestingly garbed giant is, but is enthralled as he proceeds to entertain her with stories, conversation and magic tricks and made her the centre of all his attention.

I can think of very few other people who would have or even could have done the same thing in his position.

To work with Alan has been a creative joy, and to read Alan¹s work has given me many hours of entertainment. If that was all to say about him, that would still be more than enough to sing his praises here. But that six year-old girl was, and is one of the most important people in my life--my daughter, Jenna. And for me, that long ago incident underlines what it is that makes Alan Moore special and why he is such a creative powerhouse. He really does care about the little things!

I was one small part of the WATCHMEN team, and right from the beginning Alan (and Dave) made me feel fully part of that team, how ever minor my input was. Though there is one totally and original first I can claim in relationship to the WATCHMEN.

One of the earliest WATCHMEN plotting sessions between Alan and Dave took place in a London pub beer garden. It was early March, and it was too damned chilly to be sitting outside drinking cold beer. They were postulating theories on how Dr Manhattan could materialise, "Would there be an electrical charge before he arrived or after he left?" "Would the displacement of oxygen atoms be violent enough to make a noise?" "Would he create a vacuum when he left an environment?" This was their job, my job was the colour, and all I knew about Dr Manhattan was, he was blue. "Dave, Alan, I feel a little bit like Dr Manhattan just now!" They both gave me a look of polite interest. "I think my dick has turned blue in the cold."

OK it might not have been a very funny WATCHMEN joke, but it was definitely the first!

What can one say about Alan Moore that has not been said before? I have no idea!

Just believe it all and know he is a one off.

Above you can read a comment - in strip form - to the "Last Alan Moore interview?", written and drawn by Ty Templeton.
You can read the complete piece at his site: here.
Posted by smoky man at 9:30 AM 2 comments

Above, some characters co-created by Alan Moore drawn and painted in watercolour by Filipino artist Hannah Buena.

More info about Hannah Buena at her blog: here.
Posted by smoky man at 9:39 PM 0 comments 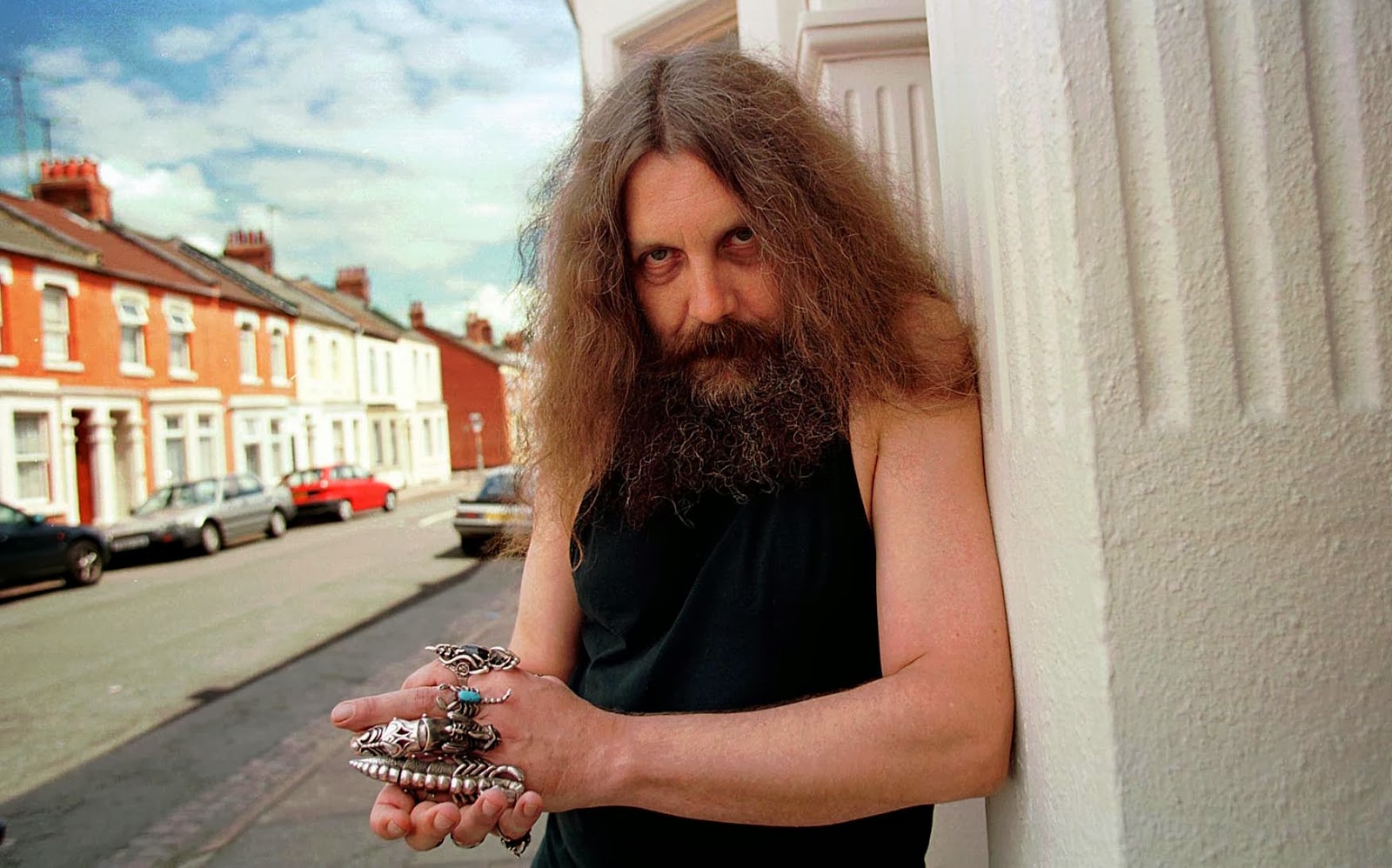 Here.
By Pádraig Ó Méalóid.
Posted by smoky man at 12:36 AM 0 comments