Moore's third person autobiography from the pages of The Saga of Swamp Thing N. 25 (1984).

"He currently lives in Northampton, England. For relaxation he enjoys staring at a fixed spot in the middle distance for hours at a time, fainting, and talking about himself in the third person. When he is an old man, he will look like the evil twin brother of Father Christmas."
Posted by smoky man at 3:56 PM 0 comments

Above a creepy awesome Alan Moore portrait by acclaimed Italian illustrator and comic artist DANIELE SERRA, from my personal collection.

The the sixth issue of Test Centre magazine contains a poem by Alan Moore, the first poem he has published for many years. The issue is dedicated to poet Lee Harwood, and features a number of pieces written for and about him.

Jess Chandler, co-director of Test Centre Publications, revealed that "The poem is called 'The Town Planning in Dreams' and is 3 verses of 6 lines. In his biography at the end of the mag, Alan says that 'After a forty-five year diversion he is currently attempting to re-engage with poetry.' So we're hoping that there will be more to follow soon!"

Excerpt from an interview published on 13thDimension.com.
Dave Gibbons: [...] I’ve always thought of Alan as being like a Mozart. He hears the whole symphony in his head and he writes out all the parts and the artist or the orchestra is the interpreter of that and actually kind of realizes those notes and those marks and those suggestions and those chords, whereas Frank is more like a jazz virtuoso, a Miles Davis or something. He’ll take a basic theme and then run with it and, you know, change things on the fly. We hardly changed anything when we were doing Watchmen. I would talk to Alan about what we were going to do, Alan would write the words, I would draw the panels and that was kind of done. With Frank, again, we would talk but then based on what I gave back to him, he would put new ideas in or change things around or… It was much more free form and organic and I enjoyed both approaches. The most important thing is to work with a writer who’s prepared to put as much effort into it as I’m prepared to put and certainly that’s one of the things that distinguishes Alan and Frank, their absolute dedication to what they do. That, to me, is the most important thing, As for the actual circumstances and the actual details of how you perform it, that’s not so important.
Posted by smoky man at 9:41 PM 0 comments 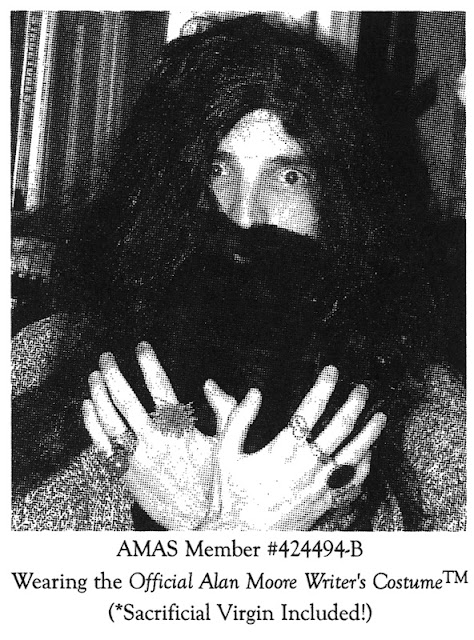 Above and below, you can read the hilarious contribution realized by comic book writer JASON HALL for Alan Moore: Portrait of an Extraordinary Gentleman book (2003, Abiogenesis Press, page 236-237).
THE ALAN MOORE APPRECIATION SOCIETY


Influence: To attempt to discuss how Alan Moore has influenced comics is quite a daunting task - and one that will most likely be done with more eloquence and intelligence than I could possibly muster in these meager few words - which is why I took a picture of myself in a goofy wig and terribly fake beard instead... But I do have an interesting (okay, humor me...) example of how we perceive the esteemed Mr. Moore's influence on comics.
In an issue of Gotham Adventures I recently wrote, I had a scene transition between two panels - the first showing a close-up of a lipstick mark on Mr. Freeze's glass helmet, the second showing a close-up of a lipstick advertisement billboard with a large pair of neon lips in the same exact position as those in the first panel. One of my best friends remarked that he thought it was very cool, but very "Alan Moore - Watchmen". I thought about that (taking it as a compliment) and pointed out to him that Alan Moore certainly wasn't the first person to do this type of visual scene transition in comics - plus they've been doing that sort of thing in movies forever. But his comment did make me realize something... While there certainly are numerous storytelling techniques that Alan Moore has invented, there are also those that we just think he's invented. And the reason for that is simple - it's because he does them so well. He improves upon them. He makes them his own. And he continues to show us that the comics medium has no limitations.

Anecdote: I unfortunately don't have any personal Alan Moore anecdotes to share, so I'll have to use one from a friend of mine (actually, the same person that I was talking about earlier), which I think successfully demonstrates the effect Alan Moore has on his readers and just how much his work means to them. My friend became politely obsessed with Alan Moore when Moore took over Writing Swamp Thing - and he had that epiphany you have when you realize you've just discovered your FAVORITE writer (or musician, or film-maker, etc.). He was so impressed and moved by the stories that he began buying extra copies of the book each month in the store and giving them to people he didn't even know, telling them that they just "had to read this". He was spreading the word. From there it was Marvelman and V For Vendetta and then everything Moore wrote that he could get his hands on. He read somewhere that Alan Moore enjoyed the work of musician (and performance artist) Laurie Anderson - and also that Moore was going to be at the San Diego Comicon that year ('85 or '86), which would be my friend's first comic convention. So he decided to buy Alan Moore the then new four-LP Laurie Anderson Live record set as a way of saying thanks for all the meaningful entertainment Mr. Moore had provided him. My friend presented him with the gift and whenever Alan Moore was at the DC booth, he spent all his time talking his ear off about upcoming projects or things he'd read about Moore in interviews. My friend is quick to point out that it was his first convention, so he didn't know about giving creators "space" - and he did let other people talk to Moore as well. And it's not like he followed him around when he wasn't at the DC booth. He wasn't that fanatical. But my friend does wonder if he falls into Alan Moore's category of fans he's scared of. Could he be the reason Alan Moore doesn't attend conventions anymore? Perhaps! And that is why his identity must remain safely anonymous...

Now I don't have a four-LP record set to offer Alan Moore, but I do want to thank him for all the years of innovative, enlightening, and moving stories he's provided us all – and for being such a huge inspiration in my own work.
Posted by smoky man at 11:31 AM 0 comments