"The legendary comic book writer shares two hours of his favourite music and chats to producer and writer Richard Norris about the important part it's played in his life and work.

[...] Hear him talk about writing, alongside his wide-ranging passion for music, magic, art labs and plenty else in between.

Expect tracks from Captain Beefheart, Joni Mitchell, X-Ray Spex, The Residents, Patti Smith and Sleaford Mods. Plus some of the music he's made himself over the years."

Moore Music in Blow up! 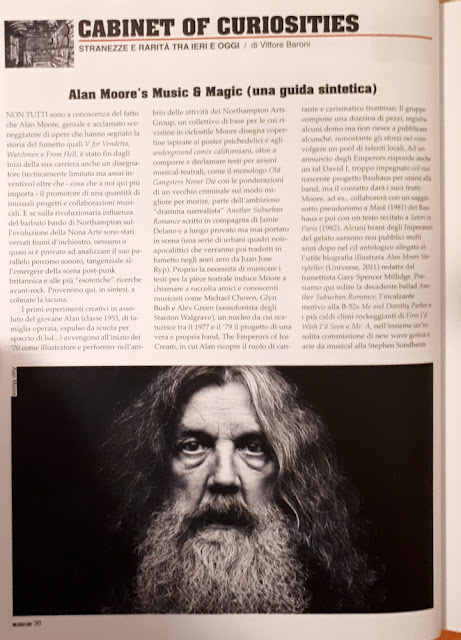 Above, a stellar portrait of our beloved Man from Northampton by Italian artist and experimenter ANGELO SECCI. You can see a selection of his works here.

The illustration has been used as cover for an Italian collection of Moore's interviews (here).
Posted by smoky man at 5:16 PM 0 comments

Alan Moore on Blake's The Ghost of a Flea

Excerpt from an article published on the Guardian. The complete piece is available HERE.

Alan Moore: As imagined by the Lambeth angel whisperer, the threatening and somehow smug abomination is theatrical in its demeanour, consciously performing for the viewer. Glossed by Blake, the flea is the transposed soul of a murderer trapped in a form that, while both bloodthirsty and powerful, is too small to become a mighty engine of destruction. Thus condemned, it struts its miniature domain and makes a swaggering display of cruelties that it can no longer accomplish. With nothing save an acorn cap to represent its drinking bowl of blood, with nothing but a thorn to serve as improvised prison yard shiv, this former demon is demoted and no longer dangerous. In its fallen state, more mischievous than malefic now, the has-been homicidal maniac is almost poignant.
Posted by smoky man at 12:41 PM 0 comments