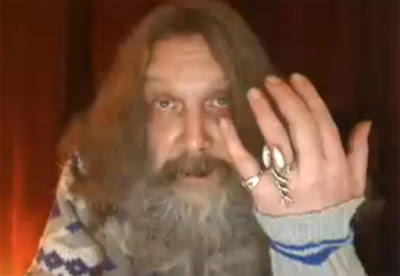 Below, transcript excerpts from a video chat that Moore did in 2012 with the contributors of Harvey Pekar statue. The video is available HERE.

"[What's] on my left hand?" [...] the one on my left hand is my, my lovely wedding ring, that I designed myself on the back of a receipt. I'd originally asked for one big vulgar opal that I could show off to everybody but they could only get me two tear-shaped ones and then they couldn't figure out how to work them into a coherent design so I did the... the caduceus there.

"What's my current favourite word?" Sesquipedalian, because it's one of those few words which refers to itself. What it actually means is having a fondness for obscure and difficult words. So, sesquipedalian, that's my, my word for today.

[...]    "You said that the work of Harvey Pekar was very important for you, but it looks very different from your work, so he talks about his life while your stories are about heroes, magic, historical characters. What is the link between you and Pekar's work?"
Well there's a few incredibly strong links. Um... for one thing, Harvey Pekar is one of the very very few blue collar talents in the comic book field. Um, this is not to say that, er, people from the middle classes don't do wonderful comics, of course they do; but my own personal background is very much rooted in the English working classes, and something about Harvey's perspective always rang so true to me; er, that the sincerity, the honesty of it, the, the crystalline honesty of it that was as clear as water - that, these were all things that impressed me immensely, that he was able to talk about working class life with such a lucid voice. And, the other thing, um, would be Harvey's attachment to the location in which he lived; his love of Cleveland, for the ground upon which he was standing, which could be anywhere. It could be Northampton, it could be the places that, that you all live. We should value the, the humble streets and boulevards an' houses that surround us. They won't be there forever, and they have incredible histories tied into them. Um, we should value them, we should protect them, and we should celebrate them in the way that, that Harvey did - just the ordinary human lives that are going on in these places. I think that, for my part I want to celebrate the same things as Harvey, but Harvey's voice was not mine. Um, we've got distinctive voices, and for my part I would rather do something like Jerusalem, where there is an incredible amount of autobiographical stuff in it; although I'm dressed up so that nobody re-recognises me. This is an old trick of mine as anybody who read Big Numbers would be painfully aware. You know, I like to appear in drag, um, so as not to disrupt the narrative, but, yeah, so there's, there's autobiographical stuff about me, about my family, and about the - more importantly about the history of the neighbourhood in which I grew up. Um, it's expressed in terms of fiction. It's got all of the, the usual extravagant fictional devices that people might have come to expect of me so it's got a few monsters 'n' things like that in - no superheroes or at least not yet. I'm a few chapters away from the end so I suppose anything could happen, but, yeah, it's, it's that level that I connected with Harvey upon the most, that his... love and tender observations of ordinary human life, as it is lived for by far the, the largest section of the population, and for the, the town, the environment around him. That is the level on which Harvey's work probably spoke to me most profoundly.

Above, an excerpt from an article about  English documentary filmmaker ADAM CURTIS, published on The New Yorker site.

Curtis is friends with Alan Moore, the former comic-book writer, who lives in Northampton, in the East Midlands. (Moore, who describes himself as an anarchist, wrote “V for Vendetta,” “From Hell,” and “Watchmen,” but he has since disassociated himself from the industry.) During Britain’s first coronavirus lockdown, Curtis sent Moore and his wife, Melinda Gebbie, a thumb drive loaded with all his films. Watching Curtis’s back catalogue put Moore into a state that he likened to a lucid dream. “We tend as individuals to acquire a massive image bank, a massive archive of experiences and things that we’ve seen, and so the archives that Adam has access to, that’s almost like our collective cultural memory,” he said. “And, by juxtaposing those images, one with another, he makes these startling convergences of meaning, exactly like a dream does—where you perhaps don’t understand it all on first experience but where it is haunting.” Moore told me that he felt “quite neurologically fizzy” after each film. At the end of the binge-watch, he sent Curtis a postcard, comparing his work to “the kind of dream where we become aware that we are dreaming and can thus attain agency over the torrent of nonsense.”

Above, another fantastic Alan Moore portrait commission by British extraordinary comic book artist and illustrator DAVID ROACH.
Roach writes: "Another Alan Moore portrait (what a popular fellow he is) allowing me to indulge in some scratchy fun! I should add that it's based on a photo taken by my talented friend José Villarrubia."
Posted by smoky man at 10:00 AM 0 comments

Above, a cute little Alan by cartoonist Jeaux Janovsky.
More info about the artist here and here.
Posted by smoky man at 9:32 PM 0 comments

Above, a recent commission piece by the extraordinary Eduardo Risso featuring V!
If you are interested in Risso's art check HERE!
Posted by smoky man at 9:00 AM 0 comments 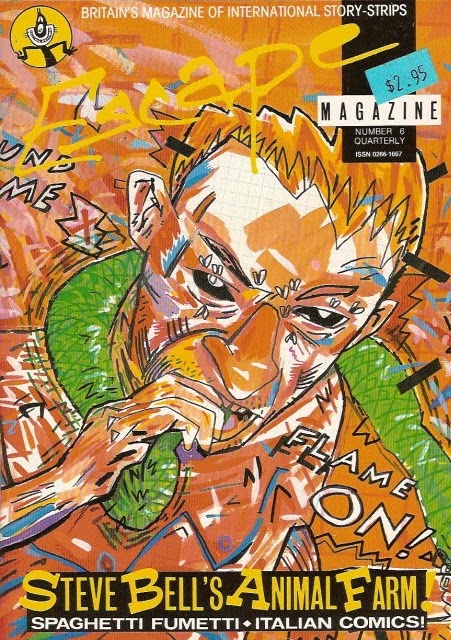 Excerpt from An impossibly rich celebrity's guide, a piece written by Moore chronicling his journey to New York in 1984. Published in Escape n. 6, 1985.

31st August, Friday
In the morning I meet Frank Miller and we call up at the Marvel offices, a curious place. The people seem friendly enough, but the atmosphere is very different to the informal cheeriness of DC. The centre of the floor is given over to drawing boards and labouring artisans, while the offices leading off from the main area are apparently the kind that you knock and wait at the door of, before entering. This is probably simple company bias on my part, but with Marvel I did get the impression of a company who make the trains run on time. I don't seem to have an awful lot to say to Marvel and they don't seem to have much to say to me.
Afterwards, me and Frank call in at a bar and down some sandwiches and beer. Talking to him, I feel a strong affinity of approach; he tells me about his forthcoming Batman series for DC, his face contorting into the different emotions of his characters as he describes them. This is something I do myself, and it comes from a near-unbalanced degree of involvement. Frank tells me that Howard Chaykin's approach is totally different. Howard is very cool and calculating in his construction, or at least that's how it looks to me. Frank, on the other hand, has a more personal and idiosyncratic touch. Out in the street, I notice a smouldering manhole cover reminiscent of those which populate the New York of Miller's Daredevil. I point it out to Frank and tell him I thought he'd made them up. We say goodbye and I head back to the hotel to meet Karen and the Limo to take me back to Kennedy airport. We stand outside for half an hour but it doesn't arrive. Eventually, Karen has to flag down one of the killer yellow cabs. The driver is a young Hispanic guy with dripping black ringlets in the style of Michael Jackson. He says 'I'll have him at the airport twenty five minutes guaranteed, I like to move, I don't wanna wait around, you know what I mean?' SLAM! The cab takes off on two wheels and I'm splattered against its rear upholstery by the sudden G-force. Outside, the New York landscape flashes by at an oddly tilted angle. Twenty-five minutes later we screech to a halt outside the British Airways terminal. 'Course my best time is twenty minutes!'
I catch my plane. Later I look out of the window, down upon New York and it looks like either a gigantic bird-eating spider fashioned in fairy lights or a luminous man with antlers. Dinner is served. I drink a Scotch and half a bottle of wine and then fall asleep. I awake hours later, just as we approach Heathrow. We land and I make my way through customs and find Jamie Delano waiting to take me home. He asks what America was like and all I can think to tell him about is a bumper sticker that Steve Bissette saw bearing the legend 'I swerve for hallucinations'. I am utterly blank. I've left my heart in San Francisco, my tie pin in the hotel and my brains all over the back seat of a yellow cab at Kennedy airport. As of this writing, my heart has turned up in the mail and I think I can buy a tie pin just like the old one. Why are there no major comic companies in Bali?

The complete article can be read HERE.
Posted by smoky man at 10:00 AM 0 comments

The two sides of Alan... by Sam Kieth

Above, the incredible contribution by legendary artist SAM KIETH for the Alan Moore: Portrait of an Extraordinary Gentleman book (2003, Abiogenesis Press).
Due to page limit in the book's colour sections only the left side of the above image was printed in the volume, page 215. Enjoy!
Sam Kieth's blog HERE.
Posted by smoky man at 4:17 PM 0 comments