1986: The Mother of All Years by Gary Phillips 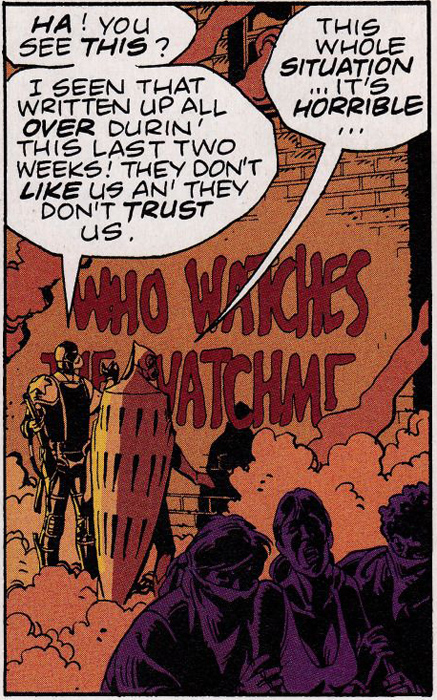 Below, a great text written by Gary Phillips, critically acclaimed author of mysteries and graphic novels. The piece was included in the sold-out Alan Moore: Portrait of an Extraordinary Gentleman book (2003, Abiogenesis Press, pag. 157).

For more info and news about Gary Phillips, visit his site: HERE.

1986: The Mother of All Years
by Gary Phillips

Click, bang, do you remember? Nineteen eighty fuckin' six, man. There's only twenty-six letters to mix and match to describe the psychic impact that series, that shake-up of the comics genre that tore down some tired, sorry ass approaches to the art form had on us fans and practitioners. What started out as a revamping of old school Charlton heroes turned into something that has rippled across the years and decades to where we are now.
Damn. And what helped spur this creation, what allowed his genie out of the keyboard, was because of some jive copyright entanglements. All because the suits upstairs didn't want no, you know, street-edge shit, no characters with flaws and depth and contradictory emotions being imposed and messing up their gaudy do-gooders.

So they let him retool and refit.

Who Watches the Watchmen was the gag, baby, the grand guffaw writ large across our collective minds when we couldn't wait, after being teased by those come-on ads, to read each successive issue of that mother of all story arcs.

But unlike say Orson Wells – and even he had more than one hand of Three Card Monty to dazzle the suckers – this dude this book is honoring has stepped up time and again and delivered.  It's like Kobe hitting those threes 12 times in one game or the first time you got a peek of some hottie's panties when she crossed her legs and she winked at you. JAYZUS.

It stays with you, know what I'm sayin'?

It's as if the Comedian, that gloating, Hoyo de Monterrey smoking, Lee Harvey Oswald lone gunman nutbag on steroids and crank was still firing those nitro velocity rounds of his from that high window; causing dissension and distraction not in the social order, but in the over-ripe corpus delicti of the comics industry. Only those bullets don't sing death. They zing tracers of energy coursing through that body to resuscitate and educate us that indeed, this fumetti, this thing of ours has merit, has something to offer in the way of its unique storytelling methods.

Watchmen brought me and so many others back to these four-color fables when many of us figured we'd outgrown them what with mortgages, car payments, and crowns on our teeth.

The stories of wonder and woe he's presented in fare like Swamp-Thing, V, Green Lantern, Supreme, Top Ten and League of Extraordinary Gentlemen keeps me addicted -- keeps me wanting more badder than an alkie lining up in the morning outside the corner liquor store to bum change for his short dog of Old Smuggler.

But his stuff doesn't leave me with a hang over. His stuff makes me jealous and envious as a writer...and as an aficionado, all you can do is admire his skill that he's always honing, not content to do the same trick over and over but challenging himself to tell the best yarn he can again and again.

I wish Mr. Moore well on reaching his half-century mark. And here's hoping the next fifty -- and that doesn't seem so preposterous given one is to understand he's been dipping into some sort of study of magiks - has him crafting tales that pleasure and bother the reader.

Above, great cover for Alan Moore Visions by Laurent Lefeuvre.

The book, in French, will be published by Komics Initiative and will contain material previously seen in Avatar editions: Another Suburban Romance, Light of thy Countenance and Writing for comics.

Pre-orders start the 1st of September, HERE. The book, obviously, is in French.
Posted by smoky man at 10:47 PM 0 comments

For more info about Dearmas, visit his blog: HERE.
Posted by smoky man at 9:55 PM 0 comments

Above, a Kirbesque version of our beloved SUPREME by friend and Italian comics expert Gianfranco Loriga. Gianfranco had a brief career in comics in the 90ies but he preferred to focus on... selling comics & sharing and spreading the love for the medium all around.

The illustration was "published" in 1997 on the pages of Clark's Bar, a photocopied fanzine I collaborated with back in the days.
Posted by smoky man at 5:20 PM 0 comments

Below, a fantastic text written by composer, sonic artist and live performer TIM PERKINS, who is a regular Moore collaborator on his music projects and live performances. The piece has been realized as contribution to the sold-out Alan Moore: Portrait of an Extraordinary Gentleman (2003, Abiogenesis Press).

Having collaborated musically with Alan for the past 10 yeas now, I’d like to take this opportunity to comment on Al’s involvement in that particular facet of the Arts, and the wider implications thereof.
I still have fond memories of Al kicking the ass out of some flimsy Tannoy speakers with an impassioned rendition of “Willy the Pimp” by Frank Zappa. One microphone and two jack leads were casualties in this onslaught of song (Al never wore slippers in my cellar), and Captain Beefheart grew another dimension to his already finely cultivated beard.
Alan’s singing days seem to be pretty much over now, but my good God! What a fine voice he possessed, combining the grittiness of Tom Waits, the mystique of Leonard Cohen and the dentistry of Shane Pogue, all neatly hemmed in by Northamptonian regional synthesis.
Our first sonic expedition together (along with David J) was the “Moon and Serpent Grand Egyptian Theatre of Marvels” in 1996. The work is bookended by two songs with contrasting vocal styles ranging from cosmic carousel barker (“Hair of the Snake That Bit Me”) to ethereal Blakeian charm (“A Town of Lights”). Since then, each successive album has posed different challenges and dimensions of thought. Certain methods have been strongly favoured however, and crop up throughout.
‘Air sculpture’ and ‘psycho-geography’ when applied to the studio, were two of many ways we could approach music and spoken- word, by treating sounds in terms of physical shape and design, of mood and colour. Off-the-wall concepts to get your fat arse down the brain-gym.
We loved to play with time, the bonding of past and future into one glorious present… there is only one moment… which is why Samuel Coleridge and Joe Meek are presently sharing an opium laced Knickerbocker Glory at the Gunners’ gig down at PO-NA-NA’s. Woooaaah!
‘Multiple sensory overload’ is another lunar-serpentine trait, the epitome of which was achieved, I think, at the ‘Tygers of Wrath’ event at the Purcell Room, Feb. 2001. Our piece, “Angel Passage” ended with a climactic fusion of music, dialogue, film and live pyrotechnics.
Creaming aside, I have admit this ain’t exactly a new trick. The Russian composer Alexander Scriabin held a similar ethos for the performance of his works. Scriabin used visual backdrops and perfumed auditoriums and sought joy through the senses… (or the Yellow Pages if it happened to be more convenient at the time).
We are merely applying it in our own way and according to experience which is relevant to us. Sure, the old masters did it all before, but then they didn’t have Line 6 digital amp systems or Leffe Blonde, so… fuck ‘em (Rule no. 1).
If psychedelia is ‘soul revealment,’ then Mr. Moore is in the thick of it, clawing ever deep into a customised sensory deprivation tank of his own choosing.
Take it to the bridge.
Sweet Soul Music.

Above a panel from TOM SCIOLI's Jack Kirby: The Epic Life of the King of Comics (page 183).

The reference is obvious: the legendary meeting between Moore and The King at San Diego Con in 1985 as captured in Jackie Estrada's epic photograph.
Posted by smoky man at 10:56 PM 0 comments

Howard Chaykin on Moore and... Kurtzman

Simply put, Alan Moore is the best writer American comic books have had since Harvey Kurtzman—and since, in my opinion, Harvey was the best writer comics have ever seen, that’s high praise. --- Howard Chaykin

Above, Chaykin's contribution to the sold-out Alan Moore: Portrait of an Extraordinary Gentleman (2003, Abiogenesis Press), page 77.
In 1985, Moore wrote The Kansas saga, a sequence of short stories that appeared in appendix to Chaykin's acclaimed American Flagg! series (issues n. 21-27). 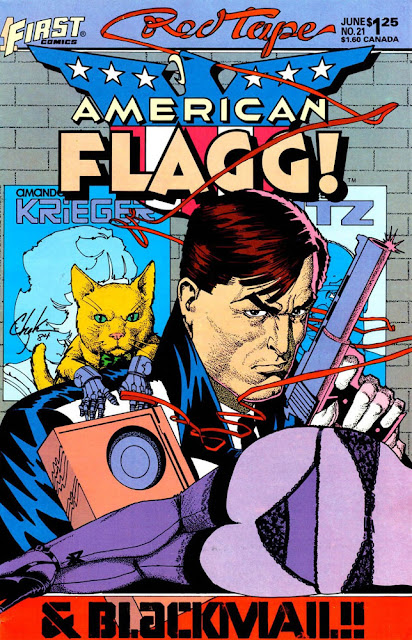