Excerpt from an interview published on BleedingCool site (here)

How did you come up with the “future” of Crossed and extrapolate what things would be like 100 years after the outbreak?
Alan Moore:  To start with, it would make a huge impact if all human industry were to stop dead in 2008. I’ve tried to think all this through. I’ve tried to come up with an estimate of around 7 billion people on the planet, and I followed Garth’s estimate in one of his “Fatal Englishman” stories, where he outlined the numbers that had been infected and the numbers that had survived, and extrapolated that across the planet. There would be a massive depopulation and a lot people would just be killed. The majority of survivors would be infected and there would be just tiny groups of uninfected human beings, however, given time, those trends would start to reverse.

The main thing is that the Crossed are extraordinarily stupid. And do not have any survival instincts. Humans do have survival instincts, and those who have survived might have done so because they’ve gotten to a place of relative safety, somewhere that can be defended, somewhere that was isolated enough not to be a problem. They would have presumably gotten better at surviving if they’ve managed to survive. The Crossed, on the other hand, would start dying off in extraordinary numbers. Mind you, there are extraordinary numbers of them, so that wouldn’t be as much of a consolation for the human survivors for a considerable time. But the first bad winter would kill an awful lot of the Crossed who hadn’t already died from starvation, stupidity, or their own colleagues.
[...]
the problem with the Crossed, they can’t really have children. They are not going to survive. We allowed that there might be a tiny, tiny percentage that might select for not killing their own children. That you might get small, isolated outposts of inbred Crossed, that this was a possibility. But the others would be dying off in extraordinary numbers. And we worked out that certain tipping points would come.

There’d be a time when the population of humans was starting to expand, the population of Crossed was receding dramatically, and also that a lot of the Crossed children that somehow managed to survive—if it happened in 2008—are going to be by 2060 relatively old Crossed. And they are not going to have been looking after themselves. So they are going to be easier to deal with, they are going to be less numerous, and I can see that from around that time, that you are going to start to get humans being able to have relatively defended settlements and would possibly start concerted efforts to “clean” various cities of what remaining Crossed there were.

Now there are still not many remaining people, and they are scattered in settlements across the world. But this was the basic premise. Vegetation would have altered. Most cities, as far as I understand it, would have been colonized by Buddleia, within 4 or 5 years. That would colonize most of our urban centers, and that brings in the butterflies, and most of the insects, which brings in the birds, which brings in other predators. And with the species that had escaped from botanical gardens and zoos, a lot of our western cities would be pretty tropical.

The complete interview can be read here.
More detail about the series: here.
Posted by smoky man at 11:31 PM 0 comments 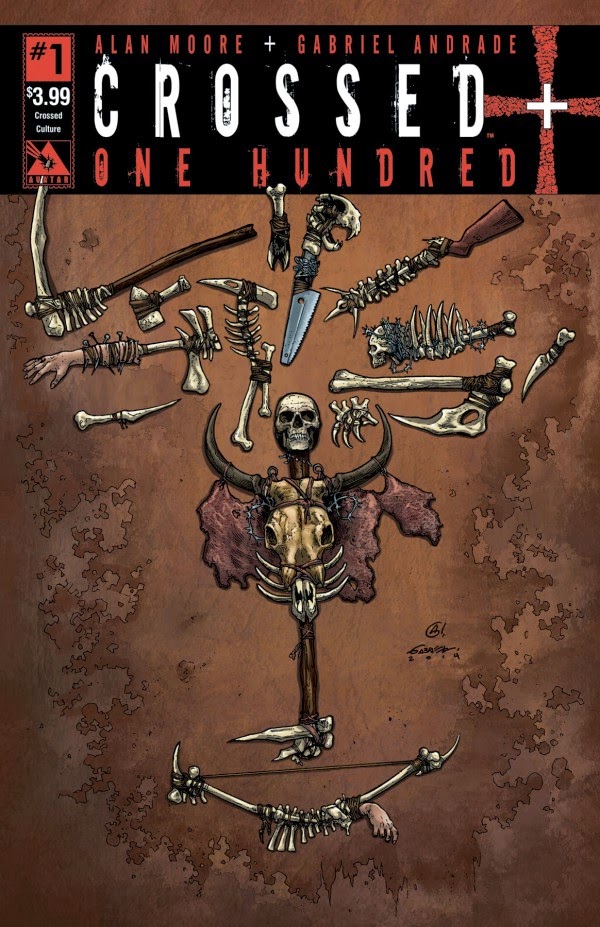 The 15th of September Bleeding Cool announced a new miniseries written by Moore to be published by Avatar Press. The first issue will be on the shelves in Dicember.
Moore will play in the horrorific universe of Crossed, created by Garth Ennis, with art provided by Brazilian artist Gabriel Andrade.

"[...] Moore has created an entirely new world and a hundred years of “missing” history to explore the future of the Crossed outbreak, what will happen to the Crossed themselves over such a long period of time, and what fate awaits humanity after losing the basic elements of modern civilization.

[...] Crossed: +100 features characters in a specific enclave of survivors, many of whom have never actually seen an infected Crossed individual and are seeking to build a future for themselves upon the ruins of the past. The natural world has returned to human cities in force, and humans are resorting to reclaiming basic technological advancements. Central to the narrative is Future Taylor, a female archivist intrigued by science fiction of the 20th and 21st centuries, and her struggling team of reclamation workers. When they encounter a small group of Crossed, they are troubled by the implications of proliferation from the violent and infected beings, and set out to uncover the mystery of why Crossed seem to be increasing and behaving unusually in the region. Is there really any hope for rebuilding human culture, or will the Crossed epidemic finally stamp out human evolution through the last of the straggling survivors?
Alan Moore explains the appeal of the series to him as a writer:

What kind of human future would there be at all? Would humans all be gone? Once I started thinking about this, and I checked all this with Garth, and he thought that it was logical, it seems pretty sound. So, that’s been part of the thrill of it. I think people think of Crossed as a horror story, and I can see why. It is extremely horrible. But actually I’ve always had my problems with genre, and I am coming to the conclusion that genre has really only ever been a convenience.
Now, looking at Crossed, I was actually thinking that this, for my purposes, is a horror story, but it’s also a science fiction story. I was thinking that Crossed is actually a science fiction story that has got a really, really high horror quotient. So that was the way that I started approaching it. I was treated Crossed as a “What if?” story, which is the premise of most science fiction.

Not only has Alan Moore full-scripted this contained arc of Crossed, but he has also designed every single cover of the series personally, in multiple formats. [...]

[...] more information on a special “sampler” publication that will precede the series’ arrival in shops and include exclusive artwork, notes from Alan Moore, and a first look at the series."

The complete article can be read on BleedingCool site, here. 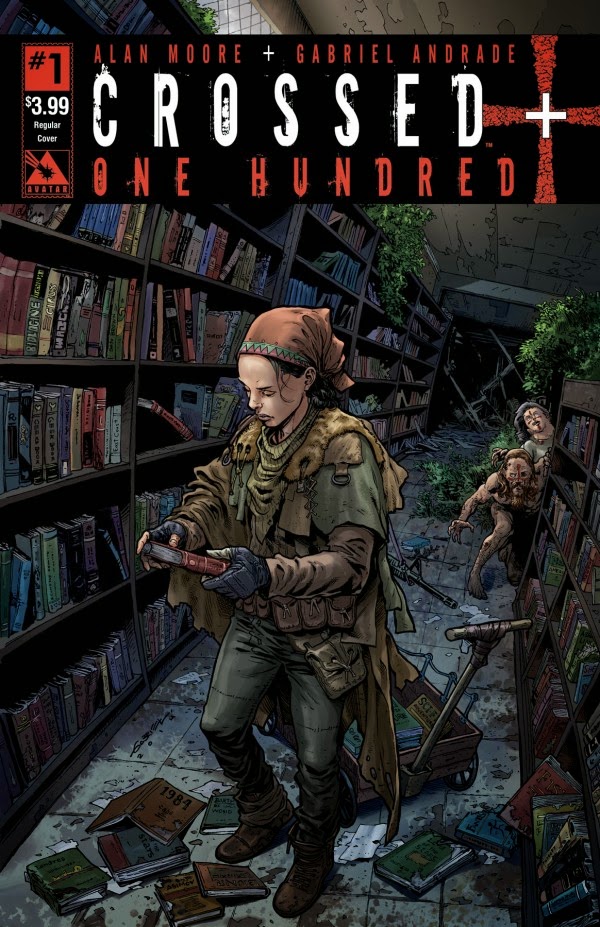 From the official Facebook page for Alan Moore (here), administrated by Moore's daughter Leah Moore. The annoucement is dated the 9th of September.

The book will be published by Knockabout who co-publish all of The League Of Extraordinary Gentlemen books;  Knockabout is also managing the foreign publishing rights.
Posted by smoky man at 4:49 PM 0 comments

Above, an intense portrait of Alan Moore (with a bit of V embedded in) drawn by Italian comics artist Francesco Frongia (founder of the comics collective Mammaiuto) for my collection.


For more information about Francesco Frongia visit his blog (here).
Posted by smoky man at 11:03 AM 0 comments

Excerpt from All About Alienation: Alan Moore On Lovecraft And Providence, an interview by Nick Talbot published in August on The Quietus website.

"He was doing his writing where he loved the New England landscape around him, he loved its history, he loved the way it looked, he loved everything about it. In that sense he was a very provincial person. He found his stay in New York unendurably horrific. But at the same time he was keeping up with the science of the day. And he understood the implications of that science; he understood the implications of relativity; he understood the implications of the quantum physicists; perhaps only dimly, but he understood how this decentralised our view of ourselves; it was no longer a view of the universe where we had some kind of special importance. It was this vast, unimaginably vast expanse of randomly scattered stars, in which we are the tiniest speck, in a remote corner of a relatively unimportant galaxy; one amongst hundreds of thousands, and it was that alienation that he was trying to embody in his Nyarlathoteps and his Yog-Sothoths.

[...] the anthropocentric view of the world – he saw that that was all gone. And I think tellingly he said that his entities should not be seen as evil. He said things like 'good' 'evil' 'love' 'hate' – these are all human concepts that mean nothing to the vast infinities. But as a person he loved the world around him. And he found great meaning in it and great warmth. As an intellect he understood that that area around him was just part of a gigantic chaotic meaningless random universe. And I think that in his stories of transcoding horrors manifesting in New England settings he was trying to bridge the gap between the personal, intimate human world as we know it and the vast, inhuman cosmos as we know it. Yet that's not psychogeography but its not a million miles away from it." [Alan Moore]
Posted by smoky man at 11:30 PM 0 comments