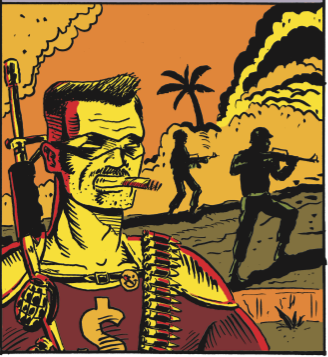 Above, excerpt from A history of American comic books in six panels by Matt Madden.

panel 4: Alan Moore and Dave Gibbons' Watchmen (this panel is copied pretty directly from a Vietnam flashback in the book)

The complete strip can be read here.
Posted by smoky man at 8:41 PM 0 comments

Gaiman talks about Moore, Morrison, himself and... pop music!

Neil Gaiman: One of the things I had in common with Alan Moore and a whole generation of comics writers around us — certainly Grant Morrison — was a love and respect for what had gone before but also a healthy interest in seeing where we could go with it. It was a combination of those the two impulses. We were in a period then in mainstream American comics that things had gotten a bit hidebound. Comics read very much like a mixture of what had come before. And I think at the time you had this wonderful little transatlantic thing that happened, this mini-British Invasion. Looking back on it, the analogy of what happened to pop music in the 1960s was probably pretty accurate. Alan Moore got to be the Beatles and, along with Grant Morrison, I was Gerry and the Pacemakers.

GB: I’ve got it: the Animals. Then you can have a spooky Eric Burdon, “House of the Rising Sun” kind of thing going on.
NG: The Animals, yes. That would be cool. But yeah, the idea that you had Brits listening to this [American] stuff and fell in love with it and for all the right reasons, and then realized they could do something new with it, something with different cultural impulses. The British Invasion did that in music, and in a way, we did it in comics.


The complete interview can be read here.
Posted by smoky man at 11:43 AM 0 comments

Excerpt from an interview by Stuart Kelly published on The Guardian.

Moore is most concerned with Jerusalem, his fiction.

"I am currently on the last official chapter, which I am doing somewhat in the style of Dos Passos. It should be finished by the end of the year or close to it. I don't know if anyone else will like it at all," he muses. I say that I can't wait, and that it strikes me that the style he and the likes of Iain Sinclair and Michael Moorcock pioneered has become central to literary culture. He sighs, shaking the walls: "Oh God, have we? Oh no, we're the mainstream!"

The complete piece can be read here.
Posted by smoky man at 4:17 PM 0 comments

Moore the Musician and Dr. Manhattan by A. Boni

Above you can admire a Moore's portrait as a musician drawn by Italian artist ALESSANDRO BONI, originally realized for the Italian book Canta Canta in 2002 and included at page 234 in Alan Moore: Portrait of an Extraordinary Gentleman tribute volume (Abiogenesis Press, 2003).

Illustrations posted on this blog with the author's permission.
Posted by smoky man at 9:37 PM 0 comments

Marvel's announcement at NYCC and the subsequent solicitations copy referred to the series and character as Miracleman -- the name adopted in America in the '80s. Why keep with this title on this project? Are you guys viewing Neil's Miracleman series of stories different from Marvelman as a character you may use somewhere else?
Joe Quesada: The answer is really simple. After much thought and internal discussion, we felt that between the two, "Miracleman" was the coolest name for the project. I wish I had a more scientific answer for you, but that's kind of how it went down. A bunch of us sat around at the editorial meeting and talked about it. We all remember it fondly as "Miracleman" and just felt that the name was by far better than Marvelman. That's not to say that the name Marvelman isn't in play for something else down the line someday, but when asked to choose between the two, well…

[...] "Miracleman" was one of my all-time favorite comic runs, and when I became Marvel's Editor-in-Chief in 2000, it was one of those things that we looked into possibly acquiring. But, for many reasons, it wasn't something that was going to pan out at that time. So to have the character in our stable at this juncture is really a dream come true. The tough thing about Miracleman is that unless you were reading the actual books around the time that they were published, it's so hard to put into context just how influential they really were. But there have been so many legendary modern comic runs -- and even modern super hero and action adventure movies -- that owe a debt to those Miracleman comics as they were directly influence by the level of realism and tone that were presented for the first time in those stories. I urge fans who are unfamiliar with the material that when they read it for the first time, think about the time period in which it was written and how utterly revolutionary it was. 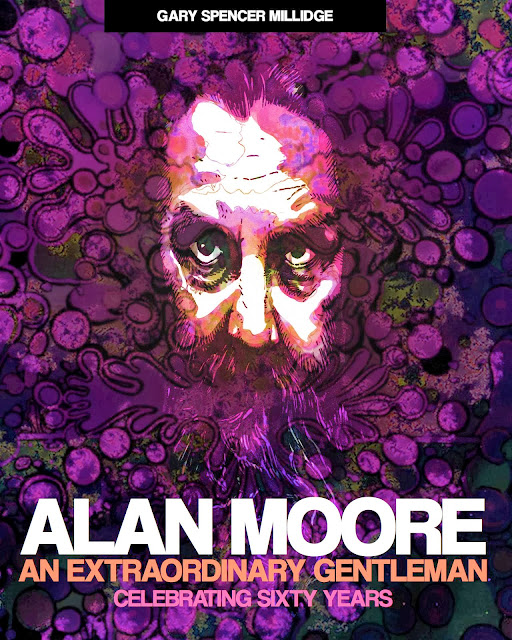 Alan Moore: An Extraordinary Gentleman is free to download and is available exclusively via SEQUENTIAL for iPad. It has been created by comics writer and aficionado GARY SPENCER MILLIDGE, author of Alan Moore: Storyteller and the critically acclaimed comic book series Strangehaven.

The comic strip was originally created in 2003 for a tribute book compiled to celebrate Alan Moore’s 50th birthday, using images from Moore's own comics to illustrate his journey, literally and metaphorically. A decade later, Gary Spencer Millidge has revised, updated and expanded the original comic, upgraded images, and re-sequenced panels, to produce a reasonably accurate, albeit highly condensed, slightly simplified, moderately sensationalised and intentionally melodramatic reflection of one of comics’ greatest creators and personalities.

Alan Moore: An Extraordinary Gentleman is now presented in full colour for the very first time, exclusively on SEQUENTIAL, and completely free to download.
The book sits alongside other SEQUENTIAL releases including a free collection of Neil Gaiman's 'lost' comics from the 1980s (with money from each free download donated to the charity Malaria No More UK), works by Moore including From Hell and The League of Extraordinary Gentlemen: Century and titles by comics legends Gilbert Shelton, Bryan Talbot, Alison Bechdel, Eddie Campbell, David Lloyd and many more.

SEQUENTIAL is available worldwide to download for free from the App Store: here.

About SEQUENTIAL
SEQUENTIAL is a graphic novel storefront app for iPad, launched by digital publishers Panel Nine in May 2013. They work with the best publishers of graphic novels across the world, including Jonathan Cape, Knockabout, Myriad Editions, and Blank Slate Books, as well as a range of indie and small press publishers.
They make quality graphic novels available digitally via their 'gold standard' platform and aim to expand the market for graphic novels for adults with a superhero-free, carefully curated selection of material. Twitter: SEQUENTIAL_app

Extra info about the project can be found at Millidge's blog: here.
Posted by smoky man at 12:52 PM 0 comments

From page 287 of Alan Moore: Portrait of an Extraordinary Gentleman book (Abiogenesis Press, 2003).

Above, you can admire a great portrait of the Bearded Bard of Northampton drawn by Italian cartoonist BRUNO OLIVIERI.

Illustration posted on this blog with the author's permission.
Posted by smoky man at 11:21 PM 0 comments 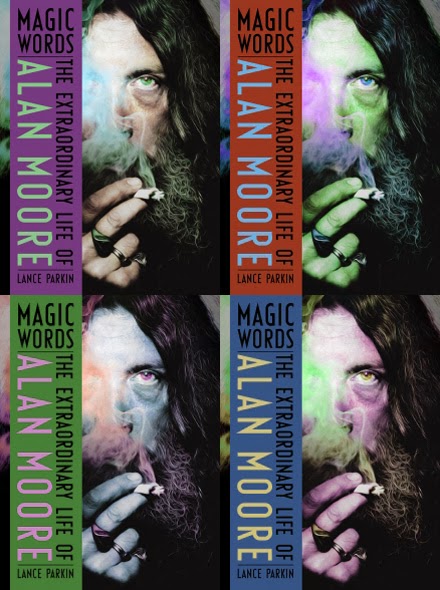 Thanks to Aurum you can win a copy of the book.

The rules are simple.
1. Write an email with subject: "Magic Words"

2. Include in the mail text ***just*** the answer to the following question:
"What are the names of Alan Moore's daughters?"

The 18th of November (which is Moore's birthday), the winner will be drawn within the ones that correctly answered to the above question and then he/she will receive a confirmation email (asking for a shipping address). 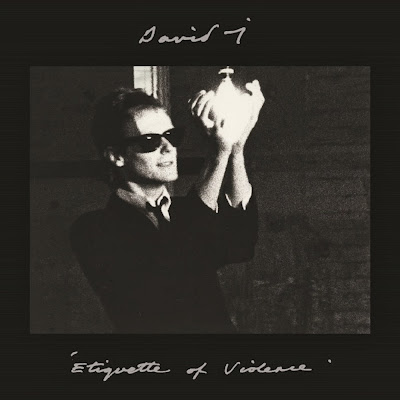 Etiquette of Violence: Expanded Edition will be release in December 2013 and will contain remastered versions of Moore classic songs Old Gangsters Never Die and March Of Sinister Ducks. 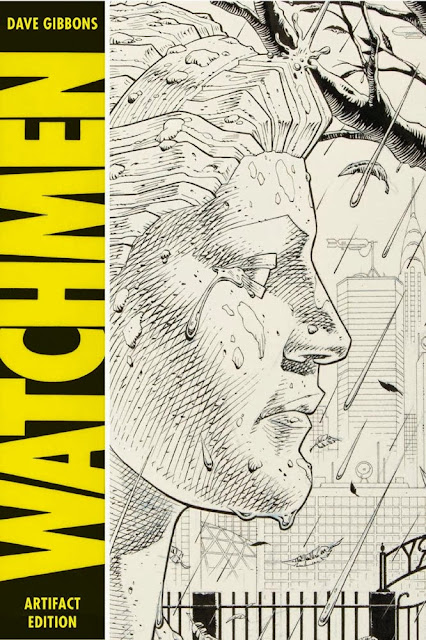 Announced at NYCC: in 2014, IDW will publish Watchmen: Artificat Edition, a special case in their acclaimed Artist's Edition line.

Scott Dunbier said: "Watchmen" (like I need to tell anyone) is something very special in comics -- no other series has even come close to receiving the praise that has been heaped upon it, and deservedly so. When Dave first approached me about doing a book like this I knew it could not be a traditional Artist's Edition -- too many of the originals had been scattered to the four corners of the globe, we could not do complete stories. But the work is just too damn good to not do a book like this! So I decided to try something a little different -- it looks like an Artist's Edition, it feels like an Artist's Edition, it's the same quality of reproduction as an Artist's Edition, but it's just a little bit different. It will collect individual pages and covers, and be called an Artifact Edition. So it's not an Artist's Edition, per se, but you still get to see all that beautiful Dave Gibbons "Watchmen" art in its rawest form.
Posted by smoky man at 12:08 PM 0 comments