Avatar launched a Kickstarter campaign to produce a Providence art book and complete slipcase set.
At the moment of writing the campaign has been already funded with more than $94,000 pledged of $8,300 goal.
More details here.
Posted by smoky man at 10:28 PM 1 comments 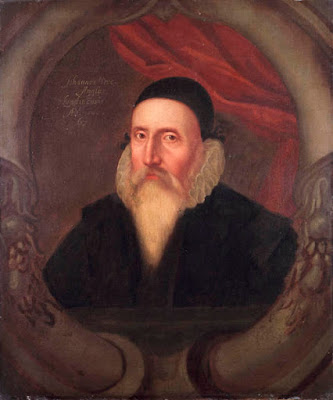 In March The Confidentials published a "magic list of mystics and magicians" written by Moore. Below you can read what he wrote regarding Dr. John Dee.
The complete list is available HERE.

Dr. John Dee (1527-1609): The first 007
This Elizabethan magus is, for my money, the most creative and influential practitioner of magic who has ever existed. A brilliant 16th century mathematician and astronomer/astrologer, adviser to Queen Elizabeth I,  Dee (literally) wrote the book on navigation that helped to establish Britain’s famous sea power; coined the phrase “British Empire” and suggested its implementation, to Elizabeth, in the colonising of America.
John Dee pretty much built the modern world that we exist in, and his Enochian magical system at least appears to work if approached according to his instructions. They don’t make magicians like that any more.

[The complete list is available HERE.]
Posted by smoky man at 10:31 PM 0 comments

Above, Alan Moore portrayed by Italian comic artist and graphic journalist Gianluca Costantini during the Comica festival in 2008.
Posted by smoky man at 5:51 PM 0 comments

Brian K. Vaughan compiled a list of ten of his favorite recent graphic novels "that take advantage of comics’ unique ability to explore the world and ourselves in ways that no other visual medium can." Providence is included in.
The complete list is available HERE.

Providence, by Alan Moore and Jacen Burrows
The greatest writer in the history of comics is doing some of his finest work ever with artist Jacen Burrows and their harrowing exploration of Lovecraft. [Brian K. Vaughan]
Posted by smoky man at 11:55 AM 1 comments 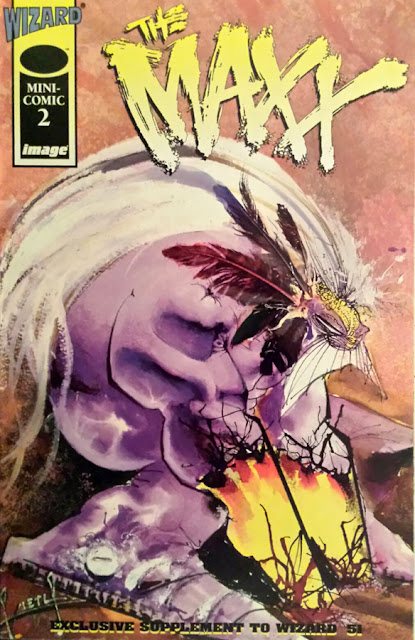 From The Maxx minicomics included as exclusive supplement to Wizard magazine n. 51, 1995.

When I called Alan Moore to help kick off this new story line in Maxx, to say I was nervous is putting it mildly. But I wanted the chance to work with him even more than I was intimidated. I asked him if he'd gotten the comics I sent, and he politely assured me he'd gotten through all 16 issues, and that he really enjoyed them. I was trying to think of what I could possibly do to get him to consent to do this one issue – beg/plead/manipulate – but he said, “Sure”. He said that a lot of issues of The Maxx are paralleling things he's interested in his own life right now. We talked about our interest in Aleister Crowley and the English tradition of ceremonial magick, Carlos Castaneda, spirit animals and Jung.
I told him my concern about being too specific in The Maxx, about how I wanted to let people read what they wanted to into it, instead of getting caught up in dogma. It's eerie to meet somebody who has so completely and thoroughly studied the same subjects and interests I have.
So, I said, trying to sound casual but curious as hell, “What happens? Who is Sara ten years from now?” There was a pause and I felt my blood run cold. In his deep voice, Alan said “Something has happened; something's gone wrong on the Outback. It's building, and may or may not be bad, sort of like the REM song, “It's the end ofthe world as we know it, and I fell fine.”
Then he mentioned a dream he had in which tiny dolls were eating the landscape, and I flashed on the exploding fairies I had envisioned in Sara's Outback. As the conversation came to a close, we both agreed that the future was gonna be a lot worse and uglier, both in the book and in the real world, but leaving me with an odd sense that, somehow, that's OK. [Sam Kieth]

The Maxx is a series created by Sam Kieth and originally published in the 90ies by Image Comics.
Moore is credited for the dialogues in The Maxx n.21.
Posted by smoky man at 11:17 PM 0 comments