Excerpt from the intro written by Alan Moore for Dreadful Beauty: The art of Providence (Avatar Press, 2017).

"[...] Jacen Burrows is, in simple terms, the finest stylist to emerge from American comics in the 2lst century. His art, combining a realistic grasp of space, form and anatomy with the more usually humorous cartoon delivery and precision of the European ligne clair school, achieves a kind of perfect balance that is almost archetypal; makes the style appear somehow familiar despite its bold originality, as if it’s always been there. And indeed, if it had always been there -- if Jacen Burrows, born fifty years earlier, had been amongst the ranks of brilliant individualists that formed the classic E.C. Comics line-up, say-- it wouldn’t have seemed out of place. The artwork and the atmospheres it conjures have a timelessness, a blindingly apparent mastery that would distinguish them in any era. Burrows’ work, eschewing half-tones, hatching and all other modelling or shading styles as if they were a kind of visual noise, emerges as pure signal, albeit a signal lent immense intensity and power by the extraordinary weight of information and exquisite detail it is carrying. His almost forensic line, impeccably controlled, refuses any ambiguity and in this way conveys a sense that what is seen upon the page, no matter how alarming or impossible, has a verisimilitude that borders on the photographic. It might be thought to embody the exacting realism that’s required in presentations of the weird or the fantastical as posited by Lovecraft’s rigorous aesthetic, and as such made Jacen the only conceivable delineator for an opus as demanding and definitive as Providence would prove to be. [...]
Posted by smoky man at 5:39 PM 0 comments

Out from the Underground 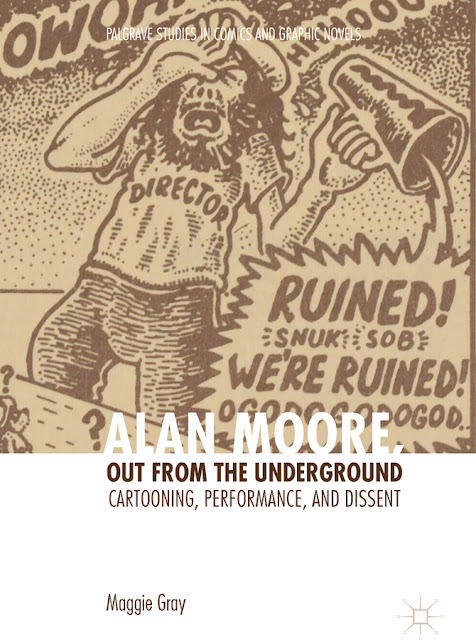 Alan Moore, Out from the Underground
Cartooning, Performance, and Dissent
by Maggie Gray


"This book explores Alan Moore’s career as a cartoonist, as shaped by his transdisciplinary practice as a poet, illustrator, musician and playwright as well as his involvement in the Northampton Arts Lab and the hippie counterculture in which it took place. It traces Moore’s trajectory out from the underground comix scene of the 1970s and into a commercial music press rocked by the arrival of punk. In doing so it uncovers how performance has shaped Moore’s approach to comics and their political potential. Drawing on the work of Bertolt Brecht, who similarly fused political dissent with experimental popular art, this book considers what looking strangely at Alan Moore as cartoonist tells us about comics, their visual and material form, and the performance and politics of their reading and making."
Posted by smoky man at 4:50 PM 0 comments