A Chronology of Everything (almost) 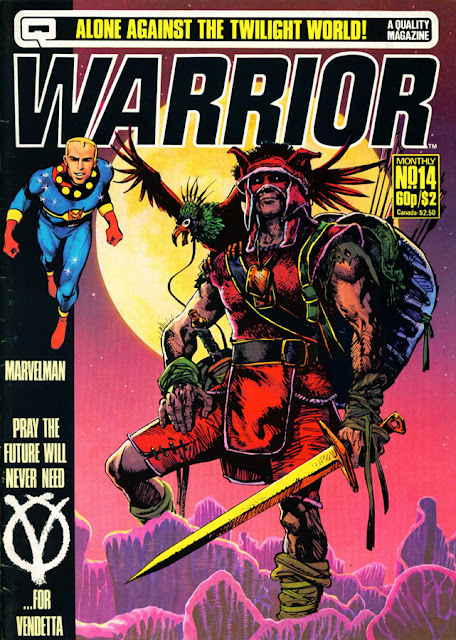 Below, a timeline created by Alan Moore & Steve Moore for the Quality Universe, the shared universe for the Warrior's characters such as Marvelman, V, Alex Pressbutton, the Warpsmiths, and so on.

It was written some time between the SSI newsletter in 1981 and Miracleman n.16 in 1989 or later but it's possible that it was completed before October 1983 when it was mentioned (or something very similar) in Dreams of Empire Nightmares of Pressbutton, an illustrated article written by Pedro Henry and published in Warrior n.14. 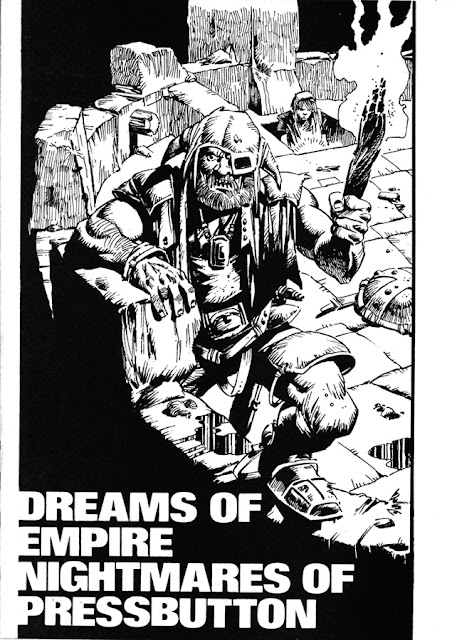 [...] some time back I got together with the large and impressive Alan Moore to talk all this out (“Alan Moore", incidentally, is not a pseudonym for Pedro Henry).
Eventually we managed to write the entire history of the universe in under two pages, which we've been using ever since. This way, everything should tie in neatly together without you having to buy a separate book to find out which dimension each story's set in. We hope ...
[Pedro Henry (pseudonym of Steve Moore), Warrior n.14, October 1983]

The original text resurfaced for the first time in Kimota! The Miracleman Companion (2001) by the extraordinary George Khoury. 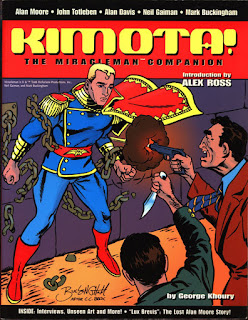 A CHRONOLOGY OF EVERYTHING (ALMOST)
by Alan Moore & Steve Moore

1700 - The Chronarchy (a race like Earth-2 Time Lords) attack the Warpsmiths of Hod. Warpsmiths wipe out all but a few of the Chronarchy with Death-Cats, the ultimate weapon provided by the Rhordru Makers.

1933 - The Qys (the race of body-changers - the Marvelman prototype race) become aware of Firedrake activity on Earth and launch expedition. Takes 15 years to reach Earth from Rigel (540 light years away).

1938- Gargunza starts working for the Nazis.

2400 - Warpsmiths take over Earth and reduce it to colony.

2700 - Remaining Chronarchs withdraw into the far-reaches of the time/space universe. Fate Computer comes out of hiding and uses all the knowledge and alien technology it's learned to help Earth recover and expand to nearby stars. No major alien races threaten Earth now.

2891 - Fate reveals itself to a lady of the back-streets on Sirius planet. Fate makes her Empress Selene I, sets up a puppet Empire over all the Terran Worlds; a Theocratic Matriarchy. "First Empire" (23 Empresses, 2 Emperors) grows rapidly, later regarded as "Golden Age." Sirius planet renamed "Capitol." Empire expands to take in most of Western Spiral Arm of the Galaxy.

3600 - The Rhordru Makers, feeling threatened by Fate, give it an electronic nervous disease which slowly eats through its circuits, over thousands/millions of years, finally sending it crazy. Fate withdraws from interaction with humans for some time while attempting to cure disease. It manages to stay it considerably, but can't cure it completely. Unguided, First Empire goes into decline, due to unwieldy size and advancing decadence.

4800 - Barbarism ends; numerous local states, ranging in size from 1 to 100 star systems, all independent but loosely confederated in that they are all human; free travel, free trade; "Merchant Princes" are powerful figures; money talks. After barbarism, live-and-let-live...

5111 - Pressbutton and McGurk killed on Zilchtron.

Crippled Fate Computer sets itself up on Earth in Castle Core, where the disease rapidly eats its brain.

War with the Wur.

Castle Core flips out and cuts off Earth from rest of universe.

Above, a weird, fantastic portrait of our beloved John Constantine drawn by comic book artist and illustrator DANIEL KRALL as contribution to the sold-out  Alan Moore: Portrait of an Extraordinary Gentleman (2003, Abiogenesis Press, page 260).

For more info about KRALL: visit his site (HERE) and his Twitter (HERE).
Posted by smoky man at 7:49 PM 0 comments

The illustration was part of the homage gallery included in Watchmen 20 anni dopo, an Italian tribute book to Watchmen published in 2006 by Lavieri, all net profits donated to AIMA, the Italian Alzheimer organization.
Posted by smoky man at 7:37 PM 0 comments

Above, you can admire a fantastic Miracleman commission by comic book writer and artist John K. Snyder III. The illustration is a sort of recreation of the cover he did for Miracleman n. 10 in 1986.

He writes: "Miracleman commission based on my original cover for Miracleman #10 (Eclipse Comics). Featuring Miracleman in full costume and a host of characters written/co-created by Alan Moore. Great fun! Pen and ink, ink wash, prismacolor, paint, on strathmore illustration board." Check HERE.

You can recognize several characters such as: Miracleman, V, Halo Jones, Captain Britain, Swamp Thing and more. So, get them all! :)
Posted by smoky man at 10:45 AM 0 comments

Below, excerpts from an interview with Rick Veitch conducted in the 80ies by Mark Belkin.
The complete interview is available HERE.
I personally consider Veitch one of the greatest comic book authors of all times! Visit his site here.

DC in the 80s: Rick spoke with DC in the 80s during an appearance at Baltimore Comic Con. The first half an hour we discussed Carl Jung. This is a transcript of the second half, discussing the Joe Kubert school, his days at Epic, Swamp Thing, and what happened at the end.


Rick Veitch: [...] Both Steve and I ended up back in Vermont, so, I would help him out, just as we’d always done. Fortunes of the book were not looking good, sales kept going down and down, and it looked like Swamp Thing was going to get canceled. As a last ditch effort, DC decided the hire this unknown British writer, Alan Moore. Now that’s the kind of luck Steve is famous for. He came over to my place with the first script he did from Alan, "The Anatomy Lesson", and I got to read it. It was a revelation. Alan had created a new way to work with an artist. His scripts were insanely detailed, but so beautifully realized it didn’t matter. He wrote them like love letters to the artist, he knew everything you’ve ever done and analyzed it brilliantly. He would make light of his own obsession with detail and then toss off something like "don’t worry about all this, you don’t have to do this, do what you think is best". And you’d end up busting your ass to give him exactly what he wants because he’s so clear in how he writes his panel descriptions.
So, based on Alan’s scripts, I became more interested in Swamp Thing and regular comic books as well. There was a great potential future for the art form in Alan’s breakthrough and I wanted to learn as much as I could from it. Steve started to draw Anatomy Lesson, but was running up against the deadline and I helped him out with that first issue. I did about a third of the Anatomy Lesson. [...]
I really wanted to learn more about this... magic... Alan was conjuring. In the process I got to know the editor, Karen Berger, so it seemed natural that when Steve and John left, that I would become the regular penciller on the book.
[...] Alan also decided to take Swamp Thing in a different direction and it became more sci-fi. We started mining the golden age and silver age DC characters. [...]
Bringing them into Swamp Thing was a lot of fun and really formed the beginning of our extensive retro collaborations over the decades.

The complete interview is available HERE.
Posted by smoky man at 6:49 PM 0 comments

The illustration was part of the homage gallery included in Watchmen 20 anni dopo, an Italian tribute book I edited in 2006 in the occasion of Watchmen 20th anniversary. The volume was published by Lavieri with all net profits donated to AIMA, the Italian Alzheimer organization.
Below, you can see Raffaele's preliminary pencil drawing he did in preparation for the final piece.

Raffaele's latest work is the comics adaptation of The Wandering Earth, the sci-fi novel written by multi-award-winning author Liu Cixin. The adaptation is written by Christophe Bec and published in China by FT Culture and Citic Publishing Group.

More info about Cruz at his official website and on Deviantart - Blogspot - Instagram
Posted by smoky man at 4:02 PM 0 comments 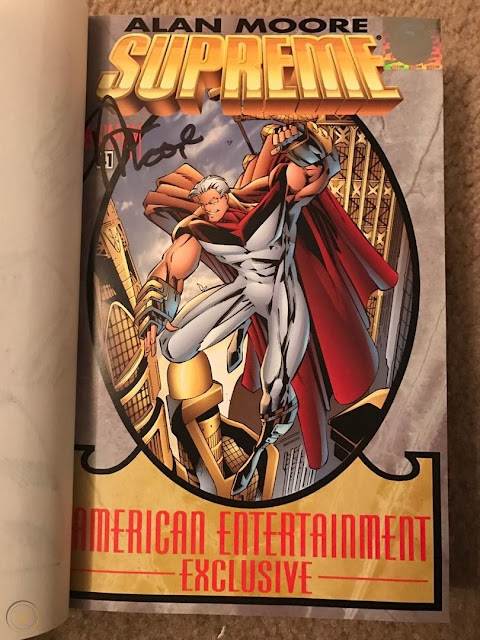 Surfing the Web, I found this:

[...] a complete run of the series including crossovers in 3 custom bound hard covers. Each book was bound in white buckram, with gold foil. The Supreme logo is on the front and spine of each book. This is a 3 volume set. The third volume is the acclaimed and award winning story from Alan Moore. The third book is signed by Alan Moore on issue 41 of the book. The third book also contains 4 sketches of Supreme from different artists during the run. The sketches are from Rob Liefeld, Chris Sprouse, Cory Hamscher, and Rick Veitch.

Above, a convention sketch or a commission featuring Miracleman by the great TRAVIS CHAREST, date unknown.
Charest contributed to several issues of Moore's WildCa.t.s run.

For more info about his art visit his site, HERE.
Posted by smoky man at 5:34 PM 0 comments

The Comedian by Mike McKone

A song for Promethea

Greek band The Loose Ties has just released a song dedicated to... Promethea!
You can hear the song on YouTube, HERE.

Lyrics start like this:
I come from the depths of imagination
I drink from the fountain of inspiration
every time as a new incarnation

It sounds interesting, doesn't it?

For more info about the band, visit their Facebook page HERE.