Above, cover of Gonzaï n.18, a French magazine about pop culture. The issue include an article about Moore and the French transcript of the famous Brian Eno interview conducted by the Northampton writer in 2004. 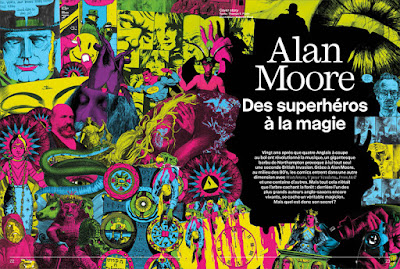 Above and below, two great Alan Moore's portraits by Daniel P. Carter used as covers respectively for Part I and Part II of a long interview with the writer realized for Carter's Someone Who Isn’t Me series.
Posted by smoky man at 11:39 PM 0 comments

The 21st century hasn’t started yet 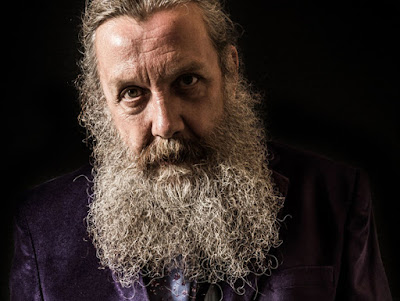 Excerpt from an interview conducted by shocko (aka seamas o'reilly) an posted in September on his site, here.

Alan Moore: [...] The thing is, counter cultures are assimilated by the prevailing culture, but obviously if you assimilate anything, if you eat anything, it’s going to have an effect upon you, and if you can make a counter culture that is either toxic enough or psychedelic enough, then the prevailing culture is going to be altered by ingesting it. And I think this is the way that culture works, this is the way it changes, and renews itself.

I would say that where we are now, 2016, is more or less where were in 1916. At that juncture of the 20th century, the modern world was about to happen. There was the First World War, arguably the first modern war, where you had prototypical tanks alongside bows and arrows. In Lost Girls, me and Melinda incorporated Stravinsky’s Rite of Spring which was completely changing our perception of music, at the same time Einstein was completely changing our perception of physics, you had the modernist writers starting around then, Eliot writing about a broken country during World War 1, Joyce – all of these people, they emerged around then. I would hope that there is where we are in our current culture because it seems to me, that after skipping hurriedly through the 1950s, 60s and 70s, with our automotive tail fins that looked like rocket ships, with our science fiction, we were kind of hurrying through those decades trying to get to this promised, Jetsons future and then, around 1990-95, when the internet was starting to become a reality, we suddenly realised that we had arrived, and this was now the future and we froze.

As a culture, we froze, we had no idea what would be appropriate to this new era that we found ourselves on the brink of. So culturally, we decided, it seems to me, to mark time. We marched upon the spot. We started recycling the culture of the previous era that we were most comfortable with. Obviously that’s a sweeping generalization, there’s always committed artists and musicians and writers who are trying to break into new territory, of course there are, but the dominant mainstream of culture seems to be paralysed and anxiously repeating itself because it can’t think of what else to do; it can’t think of a culture that would be adequate to this new century.

[The complete interview is available here]

Above, a magical Alan Moore portrait by Mexican artist LUIS FERNANDO.
The illustration has been published as variant cover for issue N. 14 of Mexican comics magazine Comikaze: here you can admire the making-of.
More info about the artist here.
Posted by smoky man at 3:05 PM 0 comments

Cometh the moment, cometh The Mandrill

Excerpt from an upcoming interview to be published by Post-Nearly Press in January 2017.
More info here (for enquiries/orders here).

Alan Moore: [...] We’ve all got our apocalypses in our heads haven’t we? And in times of a political vacuum, that’s when you get monsters emerging. Tyrants. Dictators. So if it’s a cultural vacuum, maybe you can have some sort of totalitarian art fascist emerge. And it would probably be a mandrill. The mandrill is the most beautiful and terrifying thing in creation; a baboon with a devil mask. I saw some footage of a leopard stalking in the long grass, creeping up on a mandrill that was sitting with its back to camera. The leopard must have made a noise. The mandrill suddenly turned round, and you could see the moment when the leopard realised it had made a really huge mistake. The mandrill was after it, with those beautiful blue flashes on its face, the teeth bared. So the dictator I imagined would be a mandrill. [...]

Above, a dark portrait of Alan Moore drawn by Finnish artist JUHA VELTTI included in his 50 Writers project.

For more info about Veltti and his works visit his site here.
Posted by smoky man at 3:34 PM 0 comments 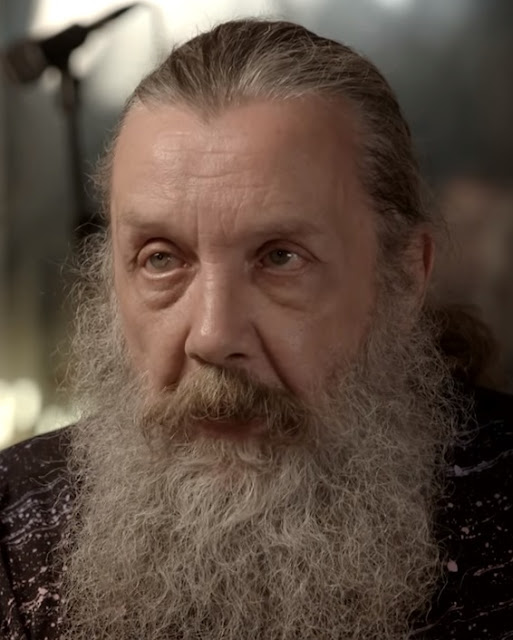 Excerpt from the fantastic interview entitled "The Craft", conducted in two part by Daniel Whiston in 2002 and published on the Engine Comics website. It is now available HERE.

Daniel Whiston: [...] A couple of creative people, one a musician, the other a writer – Steven King and Shane MacGowan – have both made very similar comments about the fact that they discover what they do rather than create it from within themselves, necessarily. I think Stephen King's talked about writing as archaeology, finding things together and dusting them down, Shane MacGowan's talked about: “songs are floating in the air, and it's my duty to grab them before some cunt like Paul Simon does”.
Alan Moore: Ha-ha, good point Shane. R.A. Lafferty, when I asked him: “Where do you get ideas from?”, and he said: “Ideas are like pumpkins, they just float through the air, and hit people on the head”. It's a similar idea. I've noticed – and this is an experiment that perhaps a lot of other writers could try: start writing upon a subject upon which you don't know very much, or about which you have no opinions. Start writing. You will find that you've not got something perfectly planned in your head and you're writing it down, you'll find that the words are forming practically at your fingertips on the keys of the typewriter, the ideas are forming, ideas that you never had before. Juxtapositions are occurring to you. Your mind goes into a very different state. If you actually notice this – you can write certain different types of prose, which can leave your mind in a state every bit as altered, as say psychedelic drugs.

Because our entire universe is made up of consciousness, we never really experience the universe directly we just experience our consciousness of the universe, our perception of it, so right, our only universe is perception. All of our perceptions are made up of words. You alter the words, you alter the perception, you alter the universe. And if you actually look back you come, as I did, to a point where craft no longer really cuts it, where you want something more than craft. Yes, you know skilful ways of persuading people to your argument or things like that, but that's not good enough. That is when you come up against a point like I did. Where I started to look at the archaic notions of writing. Not writing theory as it is now – let's look at what writing used to be. And of course, if you start looking at it, after a while it's obvious that writing must have had its origins in magic, in that anyone who'd got command of written language, would have had supernatural powers.
Posted by smoky man at 4:47 PM 0 comments

Above, Alan Moore portrayed as a sort of Doc Manhattan on Mars by Italian enigmatic comic book artist SUDARIO BRANDO.

Above, a gorgeous portrait of The Man behind the mask by Italian comic artist and illustrator ANTONIO NONNATO.

For more info about Antonio Nonnato: Facebook page
Posted by smoky man at 10:53 AM 0 comments