Above, a vibrant pencil portrait of Alan Moore by Italian indie comic artist and illustrator PIALLO (aka Gianluigi Concas).

HERE you can also view another coloured Moore portrait by Piallo.

For more info about Piallo: Blog - IperPlasticol
Posted by smoky man at 10:38 AM 0 comments 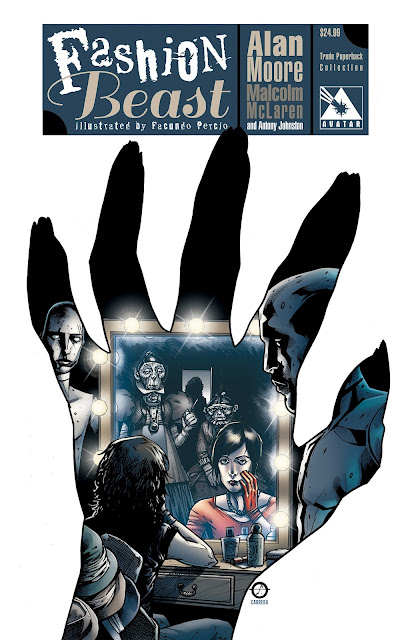 Alan Moore: [...] While I confess that I had no ambitions or genuine creative interest in the world of cinema, I had always idly wondered what it would be like to write within that form. More persuasively, I was keen to meet and if possible work with Malcolm McLaren, to my mind one of the most effervescent pop-culture intellects of the twentieth century. Thus it was that a week or so later I found myself rendezvousing with this self-consciously Mephistophelean figure in the lobby of the London hotel he was staying at. Arriving a few minutes early, I walked in on the last few shots of a photo-session for the avowedly sensationalistic Sun. A cheerily salacious newspaper photographer was coaxing Malcolm into a variety of poses to accompany a feature on the previous day’s multi-million pound court settlement with members of the Sex Pistols. “Fantastic. That’s fantastic. Now, can you turn your pockets inside-out and look miserable? Lovely.” Always with a touch of the uproarious English pantomime tradition in his carefully composed patchwork persona... perhaps Aladdin’s uncle proffering new lamps for old... Malcolm was gleefully playing along with this, although not for a moment could anyone have the impression that, in this encounter with the tabloid press, he was the one being manipulated.
When the photographer was gone we talked, and I was able to gain an impression of him in repose, between performances as the public Malcolm McLaren, the knowingly Dickensian loveable-villain cartoon that he himself had engineered for popular consumption. At least as tall as I am and considerably better-dressed, he had a bird-like quality... most probably the magpie mentioned earlier, but certainly some manner of ingenious corvid... and when standing he resembled nothing more than an anthropomorphic candle, with that orange blaze of cerebral combustion rising from the human wax. [...]
Posted by smoky man at 6:37 PM 0 comments

From Rossi's Official Facebook page: "I have been working professionally as a comic artist for over 15 years for national and international publishers and I consider myself a storyteller. All my works are tales I wish to tell. That’s why I depict people, in all their moods and frames of mind. Because everyone represents a unique story. My repertoire of media includes pencil and china ink drawings and paintings in acrylics or oil on canvas or on board."

Above, a magnetic Alan Moore amazingly portrayed by DANY&DANY.
Dany&Dany (Daniela Orrù and Daniela Serri) are an Italian comic creator studio, active since 2002. Their books are published in Italy, US, Germany and Spain, in both printed and digital format.

For more info about Dany&Dany: Facebook - Blog.
Posted by smoky man at 10:04 AM 0 comments

Above, a powerful and irate Alan Moore drawn by Italian comic book artist, writer, essayist, horror movie connoisseur and everything "indie" (and much more) MASSIMO PERISSINOTTO.

For more info about Massimo Perissinotto: his Facebook page.
Posted by smoky man at 9:56 AM 0 comments

Above, a stylish Alan Moore portrait drawn by TERESA ENNAS, an Italian-German artist based in Germany.
For more info about Teresa Ennas:
Facebook - Instagram - Tumblr - Twitter
Posted by smoky man at 6:02 PM 0 comments

Above, an intense and solemn portrait of Alan Moore by Sardinian comic book artist and illustrator MANUELLE Z. MUREDDU.
The black and white version of this same illustration is available here.
(Thank you, Manuelle!)

For more info about Manuelle Z. Mureddu visit his Official FB Page.
Posted by smoky man at 11:24 AM 0 comments

Best wishes to the Bearded One! "He is a Scorpio boy!"

Above an illustration by Canadian cartoonist JAY STEPHENS featuring several characters from Alan Moore's America's Best Comics; also below a short homage text by Stephens.
The pieces were both published in May 2001 on Ultrazine.org special dedicated to Moore.

I was fifteen years old when WATCHMEN hit comics like an ice age. Now there would always be a before and an after. By that time, my friends and I had graduated to reading Love and Rockets, Mr.X, and Yummy Fur, but we still managed to find time for our old favourites, the superheroes. Suddenly, we were struck by a single comic that gave it to us all at once. The comic that blew up the genre. WATCHMEN.

In hindsight it's no longer my favourite work of Alan Moore's (though it still holds up very well). Anybody with a sharp knife can cut something to pieces. Elegantly, meticulously, it doesn't ultimately make a difference. Diced is diced. A good surgeon, however, learns to use a sharp knife with great skill to repair and heal. To build instead of destroy. It is the fantastic surgical skill that Mr. Moore has displayed recently that so impresses me.

FROM HELL is a stitched together work of art the likes of which comics had yet to behold, and the incredible ABC books... who among us had NOT uttered the phrase " It's all been done.", in connection to superheroes? Proven wrong again by one of the medium true masters.
He's no longer tinkering with the bowels of corpses, but constructing strange, new Prometheans that walk and breathe with life of their own. And it is a thing of wonder to behold.

In 2007 Alan Moore appeared in Husbands and Knives, the seventh episode of The Simpsons' nineteenth season (Art Spiegelman and Dan Clowes were the other guests).
Some days ago, artist Mike Iverson published on his Blind Squirrel Props site the action figure he created and related kit reproducing Alan Moore in amazing 3D Simpsons' style! 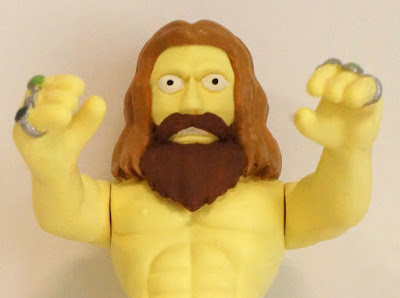 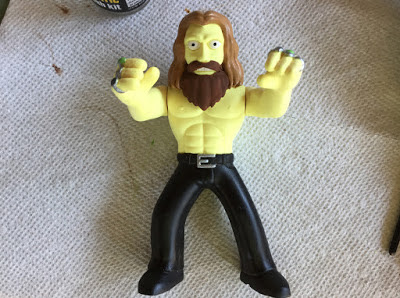