Kevin O'Neill talks about The League and Moore

"We've been friends since the 1970s I guess, I've known Alan a long time. The way we work is much more casual now, at the beginning Alan had a synopsis and an outline for the first series and he sent it to me. And the story we were just about the start grew out of the conversations on a period I would have liked to draw, or characters we would have liked to do. Sometimes I mention things to him, like the Golliwog that is in 'Black Dossier', a black character, and it came out of a casual conversation years earlier. We just found this character very interesting, it's a racist image nowadays in Britain, a racial stereotype. Originally though it was a hugely popular Victorian children's character. We had this black character but he wasn't meant to be a black man, so we brought the character back and treated him the way he used to be treated, an heroic character. That was interesting, and the great thing about it is that we could jump into any type of story we wanted to do, using the characters that we thought of, and that's satisfying." [Kevin O'Neill]

Excerpt from an interview published on Italian website Comicus.
Interview originally conducted during Lucca Comics & Games 2012.
The complete version can be read HERE.
Posted by smoky man at 12:23 PM 0 comments

And I was wondering that... more than 10 years passed from my initial idea that became the Alan Moore: Portrait of an Extraordinary Gentleman. Tempus fugit!
Posted by smoky man at 8:53 PM 4 comments

Probably one of the more positive things that happened to you when you came to the States was that you were able to meet Jack Kirby in person. What type of an impression did you get? What did he say to you?
ALAN: It was very brief. It was a bit of a tense time because it was during that panel where we were talking about getting Kirby's artwork back from Marvel. So I met Jack very briefly before or after that panel, but all I remember was that aura he had around him. This sort of walnut colored little guy with a shackle of white hair and these craggy Kirby drawn features. This sort of stockiness. I just remember him chatting with me and Frank Miller and he was saying in this kind of raspy voice, "You kids, I think you're great. You kids, what you've done is terrific. I really want to thank you." It was almost embarrassing to have Jack Kirby thanking me. I just assured him that it was me who should be thanking him, sort of because he had done so much to contribute to my career. He had a glow around him, Jack Kirby. He was somebody very, very special.

Excerpt from an inteview conduced by George Khoury published in 2000 on The Jack Kirby Collector #30. The interview can be read on TwoMorrows' website HERE.
Posted by smoky man at 2:09 PM 0 comments

Above Alex Ross pencil art. The final piece was intended to be used for an unproduced collection of 1963 by Dynamite Comics.

The complete story behind the illustration can be read at Stephen R. Bissette site, HERE.
Posted by smoky man at 11:11 AM 0 comments

AM Portrait: Remembering the Alamo...

From Alan Moore: Portrait of an Extraordinary Gentleman, page 269 of the sold-out volume published in 2003 by Abiogenesis Press.

In the following you can read (click on the image to enlarge) the 4 page comics homage written and drawn by British artist ILYA. A really funny story, full of references to Moore's comics and characters (with some "special guests" included in).

The comics has been posted on this blog with the author's permission.
For more info about ILYA visit the Wikipedia related page. 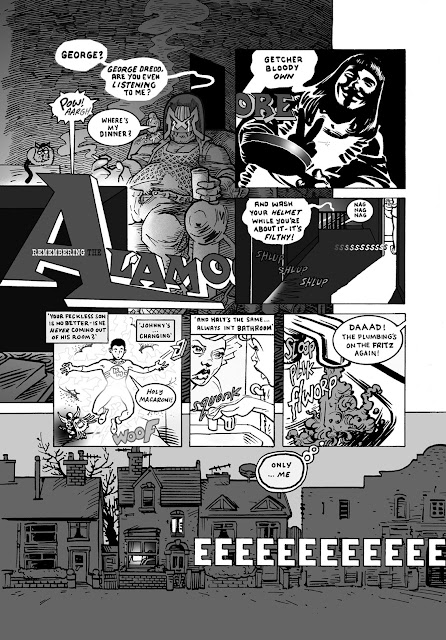 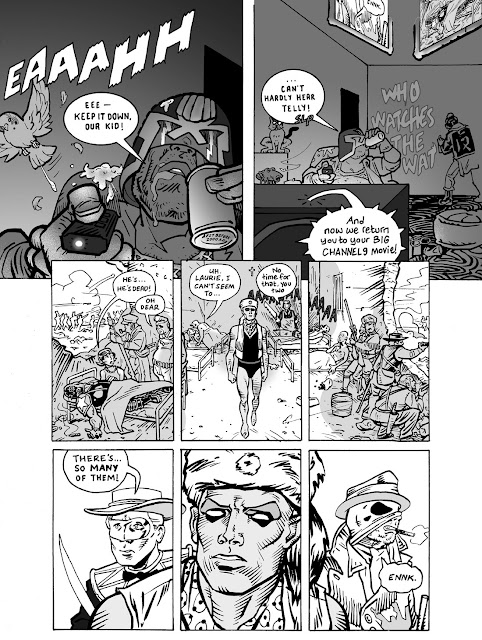 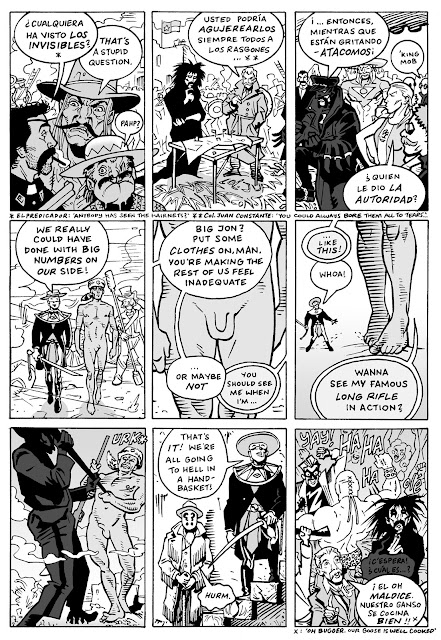 AM Portrait: Seymour talks about Moore

From Alan Moore: Portrait of an Extraordinary Gentleman, page 126 of the sold-out volume published in 2003 by Abiogenesis Press.
In the following you can read (click on the image to enlarge) the comics contribution written and drawn by RICH KOSLOWSKI.
One of the funniest pieces included in the book, featuring Seymour from Watchmen.
The comics has been posted on this blog with the author's permission.
For more info about RICH KOSLOWSKI visit his website: www.richkoslowski.com 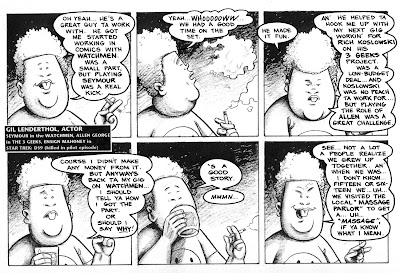 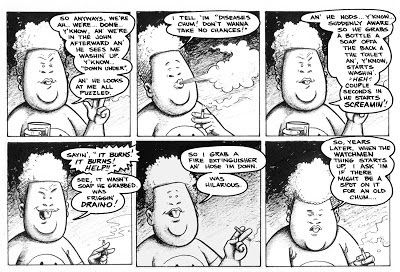 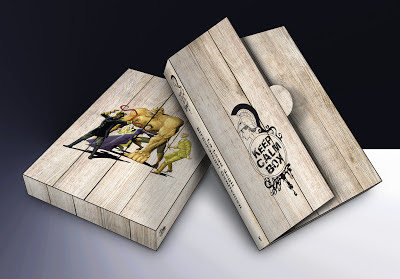 Some months ago I wrote about the announcement - by Bao Publishing - of the Italian collected edition of The League of Extraordinary Gentlemen: Century. The book has just hit the shelves in these days. But... they also produced a special edition, limited to only 200 pieces, to be premiered (right... now!) during Lucca Comics & Games Convention and available for purchasing at their site (labeled as a "pandimensional artifact").
It includes: an illustrated box case, a copy of Century featuring a special vellum paper book jacket marked with a red sealing wax "LSG" tag (Lega degli Straordinari Gentlemen is the Italian for League of Extraordinary Gentlemen), one print of the LSG game, one die and one numbered print featuring Bao's mascot (a French bulldog) drawn and signed by Kevin O'Neill. 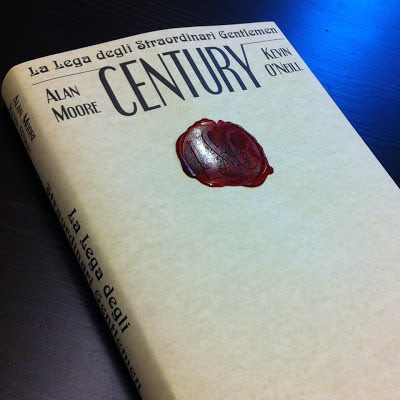 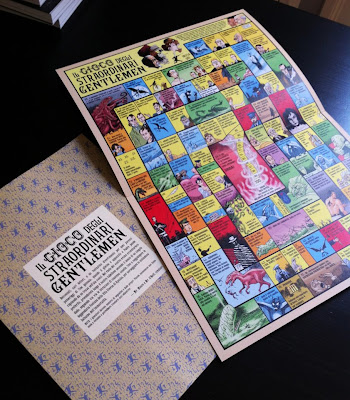 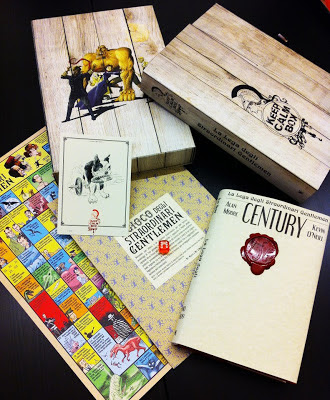 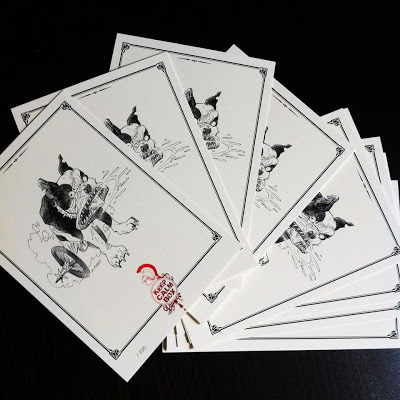 What about the price? Just 90 euros for this Italian treasure!
If you are interested just email to: ordini@baopublishing.it
Info about the "Keep Calm Box" on the publisher's page (in Italian).
Posted by smoky man at 5:12 PM 0 comments