Above, Alan Moore Pandemonium by French artist Benjamin Vareille.
In 2016 the illustration has been used as cover for issue n.18 of Gonzaï magazine.

Moore in the Eighties

Above, from The Forbidden Planet Archive, a fantastic photo of Alan Moore with Ian Gibson, dated 1986.

"Without any planning, he turned out the Moore version who's fucking angry at the comics majors... And obviously Moore is 100% right in his attitude!", Officina Infernale said. 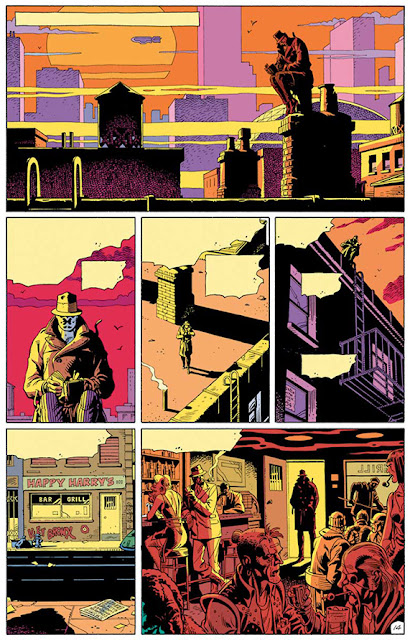 I know exactly what the image in the last panel is going to be. I can see it as a whole from beginning to end. I’m really pleased with the way it’s working.

I’ve been working closely with Dave Gibbons on the project. Dave’s putting so much into it. It’s not just the writing; we’re coming together on a level of pure story-telling. I mean, the way Dave’s drawing things affects the way I’m writing it. The way he’s laying out pages is affecting the way I’m writing it.

We’re trying to step back from the superhero a little bit; we want to take a fresh look at the idea of being a superhero. Joe Schuster and Jerry Siegel brought out SUPERMAN in 1939. There were no other superheroes and I think that for us today, it’s very difficult to imagine what the impact of that character was; since Superman in comics, the sky is full of flying men. It’s not quite the same. The whole superhero idea has grown up with cliches around it and that has smothered it in a way. You can no longer see the woods for the trees.

What me and Dave have tried to do with WATCHMEN is to somehow get back to that point where we stepped away from the conventional idea of superheroes. I wanted to do something that used the superhero in a very, very different way to the way it’s been used before: psychologically.

One of the main things is to see what effect a superhero would have upon the world. In the DC and Marvel universes, they don’t have any effect. They’re all extraordinary beings, but the world they live in is very much the same as ours.

In WATCHMEN, we try to think it through politically and socially. We’ve got a character called Mr. Manhattan who is the only actual superhero in the book.

He’s the only actual one with powers. He emerges about 1965 and from that point on, the world is different forever. Since he’s strongly aligned to the American military, obviously, he’s like a step beyond the neutron bomb. Instantly, the balance of world power changes.

In the world we’re dealing with, America won the Vietnamese war. The Russians have not invaded Afghanistan. Basically, they’re in the Kremlin under the table with their fingers in their ears. They’re terrified and the only option that they have left is mutually assured destruction. Their backs are against the wall.

You’ve reached a point where the doomsday clock is seconds away from midnight. It’s closer to disaster than our own world is. That is one of the main themes of the book: it’s this paranoid, frightening world that’s just getting closer and closer to Armageddon.

And it’s all because of this one superhero.

There are other costumed heroes in the book, but most of them are retired because I don’t think that the American legal system, or any legal system, would support superheroes. It would just cause so many problems. If you allow one guy in a mask to go around beating people up, anyone in a mask can beat people up. It just wouldn’t work. So most of the superheroes have been forced into retirement – apart from those who are valuable to the military, which includes Dr. Manhattan. That is where it all begins.

There’s a lot of different threads in it. One of the things that ties the entire story together is a murder mystery that runs all the way through the plot.

I can’t tell you an awful lot without giving away the plot.

We’ve got some interesting characters. There’s Rorschach who’s a really psychotic vigilante. Whereas in most comic books the psychopath will get angry, a real psychopath doesn’t get angry. A psychopath will break your arm and smile… or never react at all. [...]

The complete interview is available HERE.
Posted by smoky man at 4:15 PM 0 comments