AM Portrait: The League of Extraordinary Characters

From the Alan Moore: Portrait of an Extraordinary Gentleman book (2003, Abiogenesis Press), a funny 2page strip - titled The Animated Adventure of The League of Extraordinary Characters of Alan Moore - featuring a lot of Moore's characters written and drawn by the great MATT KINDT. It was originally printed at page 294 and 295 of the original volume. Posted on this blog with the kind permission of the author. Thanks Matt! 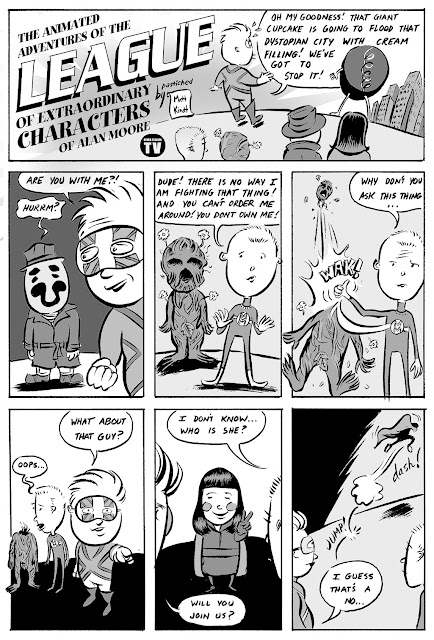 Matt Kindt is the Harvey Award winning writer and artist of the comics and graphic novels MIND MGMT, Frankenstein: Agent of S.H.A.D.E., Revolver, 3 Story, Super Spy, 2 Sisters, and Pistolwhip. He has been nominated for 4 Eisner and 3 Harvey Awards (and won once). His work has been published in French, Spanish, Italian, and German.
Posted by smoky man at 10:50 PM 2 comments

From Alan Moore: Portrait of an Extraordinary Gentleman tribute book (2003, Abiogenesis Press), a beautiful portrait of Lost Girls by ANDREA ACCARDI paying homage to Alan Moore and Melinda Gebbie's pornographic masterpiece. It was originally printed at page 277 of the sold-out volume.

Andrea Accardi is an Italian comics artist, especially known for his collaboration with writer Massimiliano De Giovanni on the grahic novels Barcode (2006), Matteo e Enrico (2007) and Il Viaggio di Akai (2010) published in Italy by Kappa Edizioni.
He also drew some issues of the popular John Doe series and the graphic novel Hit Moll written by Luca Enoch (2011, BD Edizioni).
Posted by smoky man at 11:02 AM 0 comments

Alan Moore and the giant hypermoment of space-time


And you talk about "disproving the existence of death".
I thought that seemed a substantial project for my declining years. There's a lot of other stuff in the book but one of the central theses is based upon my ruminations about mortality and time.
It seemed to me that if I understood people like Stephen Hawking correctly, this meant that we are living in a universe that has at least four dimensions. I was talking to a string theorist and he reckons possibly 11.

Funnily enough, I interviewed Brian Greene recently. He says they're all curled up like a pile on a carpet.
Little crumpled-up dimensions that are hidden inside the ones that we're familiar with. I think there must be at least four and if that is correct, the fourth dimension is not some mystical plane. It is a dimension, just like the other three. It is a physical material dimension.
When Einstein talks about space-time having a curvature, then since space-time includes the three dimensions that we're familiar with, that kind of implies that it must be curved through the fourth one, so that suggests that the fourth dimension as I understand it is not time. But it is our perception [of] the passage of time -- the universe is a four-dimensional solid in which nothing is moving and nothing is changing.
The only thing that is moving through that solid along the time axis is our consciousness. The past is still there, the future has always been here and, in this gigantic solid, every moment that has ever existed or will ever exist is all existing conterminously at the same moment.
In this giant hypermoment of space-time -- and that includes all of the instants that make up our individual lives -- it seems to me that nobody is going anywhere. Think about a standard journey through the third dimension: you're in a car driving down a street, say. Now those houses behind you are vanishing; you can't see them anymore. But you don't doubt that if you could reverse the car, those houses would still be there.
The thing is, our consciousness is only moving one way through time. We can't back up. But I believe that what physics tells us is that those moments are still there and I believe that when we get to the end of our lives, the 70 or 80 years of our life is just physical dimension . . . It is how "long" we are in time and when our consciousness gets to the end of our life, there's nowhere for it to go other than back to the beginning.
That we have our lives over and over and over again an infinite number of times and, each time, we are having exactly the same thoughts, saying exactly the same things, doing exactly the same things as we were doing and saying the first time. If it's even meaningful to talk of a first time.
I thought I'd thought of this idea myself because I was a genius . . . It turns out that the Pythagoreans had some sort of version of a great recurrence. They were basing it upon the idea that when this universe ends, because time is infinite, then there are bound to be other universes and, since those universes are finite, there will eventually be another universe exactly like this one, which I don't really think holds up scientifically.
Whereas this idea of the dimensionality of our existence, it does hold up. I can't see a way around it that doesn't involve completely contradicting one of the main conceptual lynchpins of modern physics and, halfway through Jerusalem, I came across this beautiful quote from Albert Einstein that completely summed up everything that I was trying to say but very eloquently and at a lot shorter length than three quarters of a million words.
He was apparently consoling the widow of a fellow physicist -- this was only a couple of months before Einstein's own death -- and he said: "To a physicist such as myself, death isn't really a big thing," and I'm paraphrasing now. He said: "Death isn't really a big thing because I understand the persistent illusion of transience."
I thought that the "persistent illusion of transience", that says it all. The persistent illusion that things are going away. People, times, places, I don't believe they are [going away]. I think that in a certain sense, every moment is eternal. I'm not trying to make a religion out of this and you'll notice that this doesn't require a God.
So it's not really an afterlife; it's just your life. It's a nice, secular idea of continuity that I think is scientifically credible. And whether it's true or not, that wouldn't be a bad way to live.

I have to say that the idea I'm quite taken with is the infinite multiverse, where everything happens somewhere. Every action you make.
I find that a horrible idea, because doesn't that kind of [imply that], everything that you do, there's another you that's done it better.

Yeah, but there's another me that's done it worse.
That's true, so at the end of the day, it sort of reletavises all morality or action out of existence..
I remember reading a story by Larry Niven, who's an author that I don't really like, but he's talking about a private eye who's investigating a wave of suicides and he eventually connects all this up to an announcement in the press that parallel worlds are definitely real, that there is an infinite array of parallel worlds in which an infinite number of versions of you exist. And he's sort of thinking about that and thinking maybe that's what's caused the suicides.
[There is] a kind of existential despair at the thought that however well you do, there's a million other yous that are suffering in horrifying circumstances and a billion other yous who did much better. He's thinking about this and he takes out his gun from the desk and he puts it against his temple and he holds it there for a second, and then he thinks: no, no, nobody kills themselves for an obscure philosophical point.
And he puts the gun away in the drawer again. And he pulls the trigger but the gun doesn't fire. And he pulls the trigger but the bullet shoots up and ricochets against the ceiling. And he pulls the trigger and blows the top of his head off. And there's just this array of different outcomes at the end of the story, all of which are happening in one parallel world or another.
A lot of people have found the idea of living your life over and over again absolutely terrifying; there's some people that find it very comforting. There are others that are appalled by it.

I don't mind it as long as you don't know.
This is the beauty of it. Another aspect of this belief is that there is no free will. Which is something that I've noticed cropping up a lot in the New Scientist recently. The idea that we live in a deterministic universe.
I've got a scene in my book where one of these symbolic, pool-playing, working-class, angel-type figures is talking to one of the more human figures and the human is asking the -- we can't call them "angels", they're not like angels on Christmas cards, they're a bit more substantial -- but a human is talking to one of these celestial builders and says: "Look, did we ever, any of us, really have free will?" And the angel shakes his head and says: "No . . . Did you miss it?" Then they both laugh.
As far as I can see, it's not important that we have free will, just as long as we have the illusion of free will to stop us going mad. We do have the illusion of free will. It feels like we are having each moment for the first time, that we could've done anything, that we could've said anything, but that isn't the way that science seems to be heading.
My favourite scientist, largely based on the fact that he's got an incredibly cool name, is a guy called Gerard 't Hooft. He's working upon a theory that he says we cannot test yet because we do not have tunnelling microscopes to test it, but what he proposes is that there is a layer more fundamental than the quantum layer, that all of the features of the quantum uncertainty that are so strange and peculiar are all resolved as if they'd never been there, which would completely match up the classical model [of physics] and the quantum model. The only problem with this is that if there is no quantum uncertainty then there is no free will.
So, there seem to be a few vectors that are heading that way and they've been debating [over whether] if we found out that there was no free will, wouldn't that mean that we'd all just go on a rampage? The simple fact is, most people would be predetermined not to believe [that].
Posted by smoky man at 3:22 PM 0 comments