Mister Vile and the others 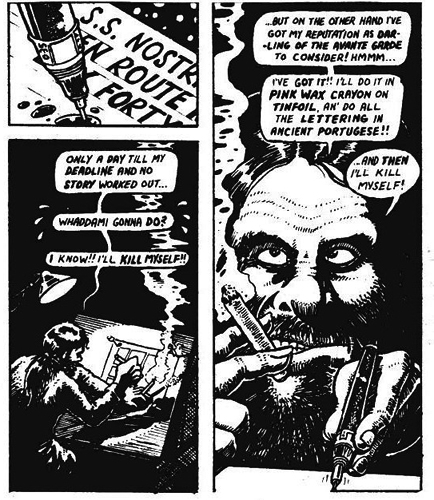 CEREBRO: Good morning, Mister Vile. Would I be correct in assuming that 'Curt Vile' is a pseudonym?
Good evening, Mr. Stachelski. Yes of course Curt Vile is a pseudonym, you jerk. What kind of mother would name her firstborn Curt Vile? My real name is Elrod Sanilav. On occasion I have also posed as Alan Moore, Jill de Ray, and Translucia Baboon. And as a scintillating tidbit of information for all you fans of the adorable Bauhaus pop group I can reveal that the sleeve notes on the second album 'Mask' were also by me in the guise of avant garde poet Brilburn Logue. My one abiding fear is that one day I'll wake up and find that I'm really a pseudonym for John Wagner or T.B. Grover. Incidentally, is Stachelski your real name, or did you arrive at it by throwing darts at a Scrabble board?

Above, a fantastic illustration by NICOLA TESTONI, digitally coloured by the artist, which has been published on Italian magazine Linus, December issue, which contains a special dedicated to Moore.
The picture was included in the article I humbly put together - with the help of friends Koom Kankesan, George Khoury, Omar Martini, Raphael Sassaki, Antonio Solinas and DeZ Vylenz - a mash-up of some interviews with Moore that I was involved with in the past, focusing on his most personal visions such as Eternalism, Art as Magic, Magic as Art, etc...

If you can read Italian, more info regarding the Linus' issue HERE and HERE.
Posted by smoky man at 8:31 PM 0 comments

Above, a gorgeous illustration drawn by the amazing ALEX HORLEY as contribution to the sold-out Alan Moore: Portrait of an Extraordinary Gentleman (page 72) published in 2003 by Abiogenesis Press. 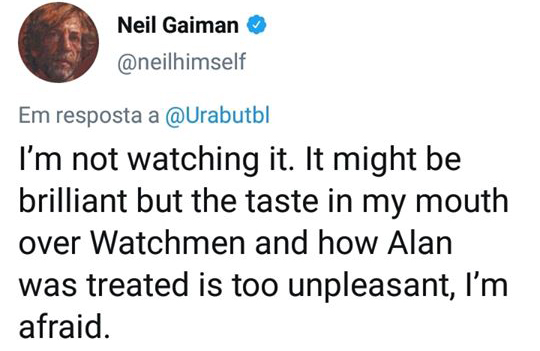 Above Neil Gaiman's tweet, dated 12th of December, replying to a user who solicited him to tell Moore that "HBO's Watchmen is a work of genius en par with, and because of, the original series." 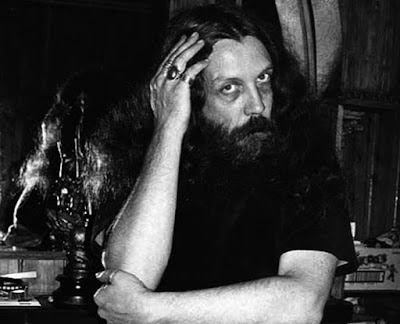 Excerpt from an interview pubblished in 1997 on Feature Magazine Volume 3, Number 2.

FEATURE: Where do you see yourself moving as an artist?  What sort of legacy are you trying to build, what kind of body of work are you trying to create?
ALAN MOORE: I've never really thought much of a legacy. I suppose that I don't know, I'm just trusting the process. I look back at the early work that I did. I look at Watchmen, and I must admit I feel a certain amount of unworthy embarrassment.  It's nothing that I should feel, but just the fact that it was a superhero comic. I was trying to say something serious in a fairly lightweight form. Like I say, I wouldn't do that now.  I'm still very proud of Watchmen, but I'm prouder of stuff outside that genre like From Hell, like Lost Girls. There's a progression going on here. It's only a progression of ideas in my head, but they're following a kind of path. I'm on the path, I don't know where it's going, and I don't really have a destination in mind. There's no plan here, there's just a path which I am trying to uncover and interpret as I go along. My works are, I suppose, a series of communiqués from along the trail. My works will tell you more or less where I am at any given point along that trail. What lies further down the road... I mean, my list of things that I'm gonna be doing in the future, I suppose should be considered directions that look to me promising to head out in. I don't know what I'll find when I get there, and I don't know what path will lead from there. I don't know where I'll be going after that.
I have my own sort of preoccupations, they tend to veer towards getting further in to something. When dealing with mainstream comics, I'd perhaps try and look at the politics or the morals that informed the other situations in these books, trying to get under the surface of that. When I'd explored that for a bit, I'd try to get under the surface a bit further still. To talk about politics in a more general sense and just relating them to a funny book world. There's a point where you want to go further still. It's a sort of burrowing, I suppose. That's the best way that I can describe the process. I want to try and penetrate the different layers of meaning that there are in the world as deeply as possible. Whatever tools or whatever avenues seem to be most productive towards that end are the ones that I shall be taking. But this is a very subjective thing. It's a totally unpredictable process inside my head. I shall just have to see where it takes me. I try not to second guess that sort of stuff.
I guess when I finally drop dead over the typewriter, then, and only then, I'll be able to see what body of work I've left behind. I'm sure that eighty percent of it will be crap, but there'll probably be a couple of good things in there that will endure and they'll probably be the last things that I ever thought they'd be.

Above, the amazing illustration (with a reference to classic Peanuts strips) drawn by HOWARD CRUSE as contribution to the sold-out  Alan Moore: Portrait of an Extraordinary Gentleman (2003, Abiogenesis Press, page 123) on the occasion of Moore's 50th birthday.
Cruse recently passed way: a tremendous loss for the medium and the comics community. Sigh.

More about Cruse and his work HERE.
Posted by smoky man at 3:06 PM 0 comments

Excerpt from "An authentic fake - A pubside chat with Alan Moore and Peter Whitehead" by R.F. Paul published in Esoterra n.6 in 1996.

Do you consider yourself a Thelemite?

Alan Moore: Not entirely. I have got a lot of sympathy with Crowley's vision. I think he was the 20th century's magickal equivalent of Einstein. But I think that the Thelemite ideal was probably true for Crowley at that time. It doesn't feel true for me at this time. I will still take a lot of his ideas, a lot of his thinking and work it into my own scheme of things. But it wouldn't be fair for me to say that I was a Thelemite because I have problems with some aspects of it.

AM: For example, the most famous of Thelemic utterances, "Do what thou wilt shall be the whole of the Law." Now, I've got no problem with that nor with the definition of Magick as "the Science and Art of causing Change to occur in conformity with Will." Except that it seems to place too much emphasis on the will. In my experience of Magick, it is often spontaneous, it has got nothing to do with the will of the person who is allegedly practicing it. Things sometimes just happen. Sometimes things go wrong. Sometimes things happen that are completely different than those things you willed to happen or expected to happen, but its often a more satisfying magickal experience because of that. To me placing the will of the magician above the universe, although I'd expect Crowley to do that, is not the way that I feel about things. I feel its more my duty to bring my will into line with the universe rather than the other way around. Looking at the two factors involved in that equation - me and the universe - you know, I'm still in a position, perhaps unlike Crowley, where I think the universe is probably the senior partner in that relationship. I'm not dissing Crowley, I'm not knocking him. . .
Peter Whitehead: A sleeping partner?
AM: Well, no, it plays a very active role in the relationship actually. . .
PW: You put up the capital.
AM: (laughs) A certain amount of Crowley's stuff seems predicated on Crowley's personality. There is his thinking, which is often wonderful, illuminating and brilliant. There is also Crowley's ego, which was probably formulated by this strange Plymouth Brethren upbringing and the pressures which that must have put on him to assert himself. And I see Crowley's personality and aspects of it, which I probably wouldn't like if he were sitting opposite of me now. And there's a lot that I would like about the guy. But certain aspects I wouldn't like and I sometimes see those aspects coloring the doctrines of the Thelemites. For example, take the Book of the Law. I mean, its a beautiful piece of prose. I have no problem accepting that it was channeled from somewhere. However, I have to note some strong similarities between the world-view of the Angel Aiwaz and the world-view of Aleister Crowley himself. Now, I would say that to me, these entities are very often distinct, separate entities from us, and they also are us at the same time. Now, from that point of view, while Crowley is certainly the most important magician of the 20th Century there is stuff in his personality which he never managed to resolve. Looking at his life objectively, I'd have to say that, without trying to be judgemental. His last words were, "I am perplexed." It was not as smooth a ride as sometimes he tried to portray it as. And inasmuch as those elements of Crowley's personality do pervade his thinking, that's where I'd have to draw the line and part company with Thelema. Does that sound halfway reasonable to you?

Yes. Sure. Even though the "I am perplexed" quote is bullshit.

AM: Is that apocryphal?

AM: I wonder what he did say. "I am perfect", perhaps?

A message From Hell

MOORE: What From Hell can tell us about our own lives, is that those same ancient destructive forces, that same misogyny, that same darkness, is still with us, and for all of our veneer of technology, we've not managed to banish those shadows even slightly.

[...] As the century draws to its end, we find that our entire culture seems to be boiling and bubbling an' erupting into strange new forms. I think that it is the job of artists to help us to understand the new shapes that our world is blossoming into.
Posted by smoky man at 6:03 PM 0 comments