The gent with the rings and the serpentine cane

Above, an exceptionally fitting portrait of Moore by acclaimed British comics artist and cartoonist HUNT EMERSON. I am really proud to be the owner of such a gem! Grazie, Hunt!
I also strongly recommend Emerson's last book, Lives of the great occultists, which has a lot of links with Moore's interests, I know that you know that. Check it HERE!

For more info about EMERSON visit his site: HERE.
Posted by smoky man at 5:04 PM 0 comments

Above, a great Nite Owl II sketch by British Master artist DUNCAN FEGREDO. He did it for me during Bristol Comic Festival 2002. Those were the days!

For more info about FEGREDO visit his site: here.
Posted by smoky man at 1:32 PM 0 comments

The Owl and The Man by Franco Brambilla

"I did it as a possible Urania cover and... you know, I have always loved the Nite Owl ship." [Franco Brambilla]
In 2006 Franco, who is a long-time friend of mine, contributed to Watchmen 20 anni dopo, an Italian Watchmen tribute book published by Lavieri. Check it here.
For more info about the artist visit his site: HERE.
Illustration posted on this blog with the author's permission. Grazie Franco for such a gift!
Posted by smoky man at 2:28 PM 0 comments

This June Editions ActuSF released a book exploring Moore's whole career, for the French market.
The 300-page volume has been written by translator and comics expert Laurent Queyssi together with journalist Nicolas Trespallé.
More info HERE, in French.
Posted by smoky man at 11:39 PM 0 comments

Moore in black by Simone Pace

Above, a mysterious smoking Moore captured by Italian illustrator and comic book artist SIMONE PACE.
For more info about Pace check his Behance and Tumblr page.
Posted by smoky man at 4:12 PM 0 comments

In the past days I was trying to sort out my comics and original art collection.
It came out a... preliminary pencil sketch that TIZIANO ANGRI sent me - years ago - with his final Moore portrait!
I confess that I couldn't remember it. Neither could Tiziano.
So... here we go! Enjoy!
Posted by smoky man at 8:41 PM 0 comments

Above, a perfect Watchmen recap page (after Gibbons) in its classic 9-panel grid, with every single panel wisely selected from the original source. By Italians Giuseppe Camuncoli (pencils), Lorenzo Ruggiero (inks), Fabio D'Auria & Mauro Corradini (gray tones & sfx).
The illustration has been realized as contribution to Watchmen 20 anni dopo, an Italian tribute book to Watchmen published in 2006 by Lavieri.
Posted by smoky man at 4:01 PM 0 comments

The Show... in October 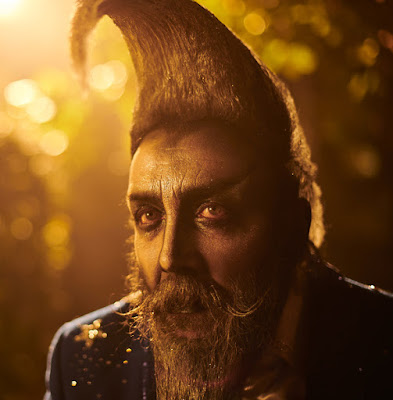 The Show, the movie written by Moore and directed by Mitch Jenkins, will be finally premiered this October at Sitges Film Festival!
More info and details HERE.
Posted by smoky man at 11:27 PM 0 comments

Below, a small excerpt from a long interview conducted by journalist Peter Moerenhout and published in Belgian magazine Stripgids n.7, June 2020.

Special thanks to Peter Moerenhout for his permission to post the excerpt from the original interview text. Grazie, Peter!

Alan Moore: [...] As far as new fiction goes, I was very pleased to write a longish short story for PS Publishing’s authorised revival of Michael Moorcock’s New Worlds, my favourite magazine of all time and one which it was a boyhood dream of mine to contribute to. The story I’ve written, all set in the first femto-second of existence, is titled ‘The Improbably Complex High-Energy State’. Then, after that, I wrote a story of similar length for the next issue of the Northampton Arts Lab magazine, which this time around is a science-fiction anthology edited by Donna Bond. The story [...] is called ‘Location, Location, Location’ and deals with the pressing issue of whereabouts in Bedford Jesus Christ is going to live when he returns after the surely-imminent apocalypse. Another story, which I’m writing at the moment, is titled ‘We Plough the Stars and Scatter’, a science fiction story which, yes, alright, you’ve got me, is set in Northamptonshire, in the Republic of Greater Billing in the year 2062. I’ve met with Tony Bennett from Knockabout to discuss completing and publishing The Moon & Serpent Bumper Book of Magic, but probably the most significant project is the resumption of my abandoned John Dee opera, this time in collaboration with the exquisite musician Howard Gray. I’ve written another of the short intervals that punctuate the narrative, an operatic conversation between the dying magus and his faithful surviving daughter Katherine. [...] and have contributed short to-camera pieces for various causes, such as Extinction Rebellion. [...] 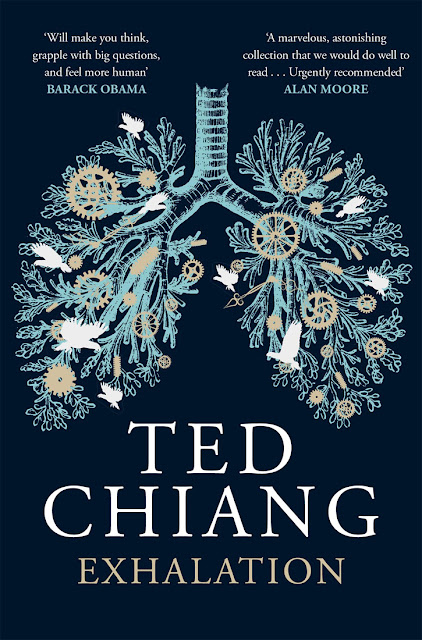 Above, cover art for the paperback edition of Ted Chiang's Exhalation, a collection of his amazing sci-fi short stories, featuring Obama and... Alan Moore's blurbs!

Beautifully written and conceived, this is a marvellous, astonishing collection that we would do well to read before the worlds it conjures are upon us. Urgently recommended. --- Alan Moore

More info HERE.
Posted by smoky man at 8:00 AM 0 comments

Above, the variant "collector" cover for Alan Moore Visions (published in France by Komics Initiative) drawn by Laurent Lefeuvre. More info about the book HERE
Posted by smoky man at 9:00 AM 0 comments