In the following a small excerpt from an interview I conceived with friend Antonio Solinas some years ago. It was conducted via phone by A. Solinas on 19th February 2008.
Originally printed in Italy on Scuola di Fumetto (N. 60, May 2008, Coniglio Editore) and Blue magazine (N. 189, May 2008, Coniglio Editore) in the occasion of the Italian edition of Lost Girls published by Magic Press. Lost Girls originally published by Top Shelf.

The complete interview can be read here.

Do you know the work of Italian erotic comics artists at all?
Alan Moore: Yes, I mean, I am familiar with a number of the erotic comics artists. For some of them, I think their drawing ability is fine, and there have been a couple of works that I thought were particularly ok. Generally, it’s not to my taste. That’s not to say there is anything wrong with it, simply the majority of it is not to my taste. Even with, say, somebody like Milo Manara, who I recognise as an incredibly good draughtsman (I mean, he did some work with Hugo Pratt, the Indian Summer, that was I think some of the best stuff of his that I have seen, possibly because of the pairing with Pratt), when I have seen some of Manara’s solo erotic work, the draughtsmanship is perfect, but it’s not to my taste. The women seem to be pretty much the same woman with different wigs on, there doesn’t seem to be any individuation of the female characters and they do seem to be largely sex mannequins, which is fine if that is the kind of material that you like, but I never really responded to it. In Guido Crepax, I can see the stylishness of his work, but his women have a starved quality, they look like concentration camp images a lot of the time, which I recognise it’s just his style, but it tends to make the work appear morbid, in my eyes.
Like I said, while I can admire the technical excellence of a lot of these people, the actual material produced is very seldom to my taste, which is not in any way meant as a criticism, but simply to say that I suppose you can’t please all the people all the time.
Robert Crumb is someone I have got unreserved admiration for, although I don’t’ know if he is classed along with the glamour artists. I don’t know if he would be classed in quite the same category, but his stuff I can engage with: it seems human to me, whereas in a lot the more glamour-oriented artists there’s a coldness, a certain inhumanity, or at least in my perception. Not to take anything on their abilities, it’s just something about the atmosphere of the scripts or the presentation of the people in them. It kind of leaves me a bit cold.

The complete interview can be read here.
Posted by smoky man at 1:02 PM 0 comments

Gibbons say "they are really not canon."

[...] "as far as I’m concerned, what Alan and I did was the Watchmen graphic novel and a couple of illustrations that came out at the same time. Everything else – the movie, the game, the [laugh] prequels – are really not canon. They’re subsidiary. They’re not really Watchmen. They’re just something different." Dave Gibbons.

You can read about the interview here. And you can see Gibbons talking at length in the video below. The Watchmen statement is about one hour seven minutes in.
Posted by smoky man at 9:31 PM 0 comments

The Italian League is coming... 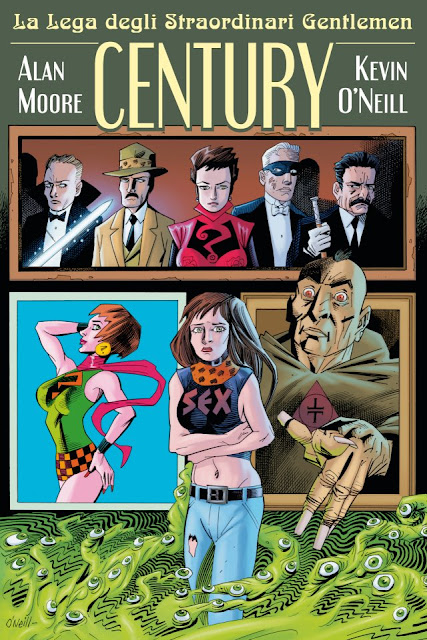 Above, the Italian cover for the upcoming collected edition of Century to be published by Bao this fall. The book will be premièred in November during Lucca Comics with special guest appearance by artist Kevin O'Neill.
More can be read here.
Posted by smoky man at 5:34 PM 0 comments

At the end of 2006 - in the occasion of its 20th anniversary - I edited an Italian Watchmen tribute book which was basically a collection of 12 brand new essays by well known comics experts analyzing Alan Moore & Dave Gibbons masterpiece.
The volume was published by Lavieri, a small Italian publisher, with all net profits donated to AIMA, the Italian Alzheimer organization.
Legendary writer Michael Moorcock wrote the introduction. 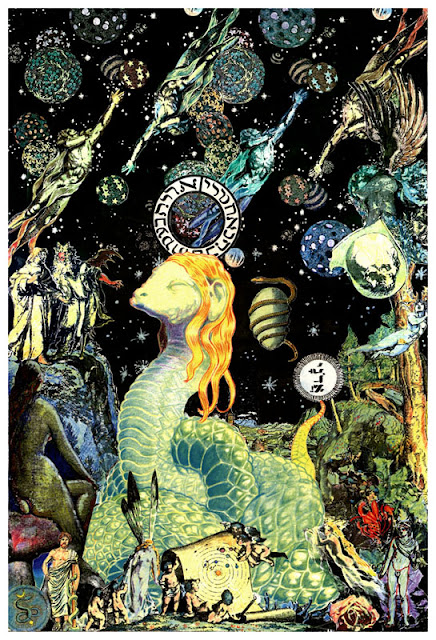 From the great site of amazing artist and Moore's collaborator John Coulthart:
Glycon (above) and Asmodeus (below) painted by Alan Moore (1994). 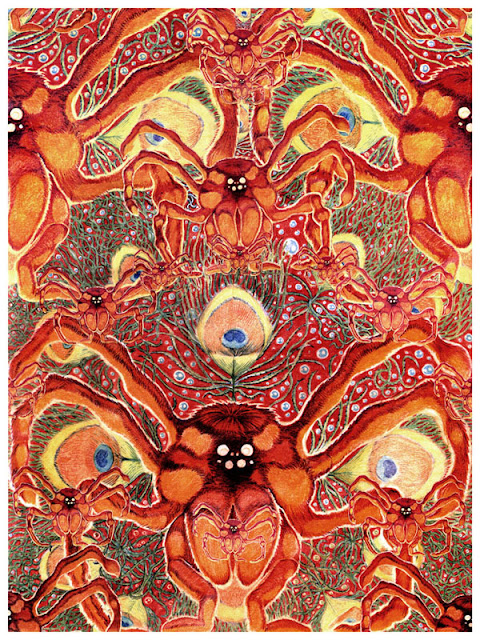 The Italian League of Extraordinary Gentlemen

This October, Italian comics company Bao Publishing (which previously published Neonomicon with great success: first edition sold out almost immediately, so it has been re-printed) will publish the collected edition of The League of Extraordinary Gentlemen: Century. It seems they will be the first publisher in the world to print Century in collected form.

Furthermore, they commissioned a brand new cover to the amazing Kevin O'Neill for the occasion. Above you can see it: art by Kevin O'Neill, colors by Ben Dimagmaliw.

Below, you can see the inked black and white version and the hand-painted color guide indications provided to Dimagmaliw by Kevin O'Neill.
Enjoy! 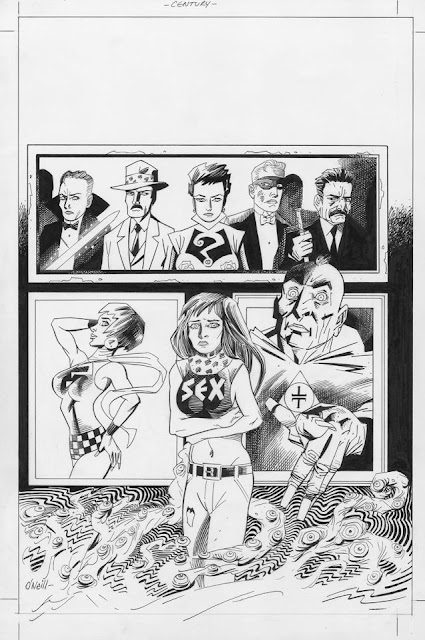 You can also read (in Italian) and see some pictures of Bao presence at the recent Century premier at Gosh! here.
Posted by smoky man at 1:40 PM 0 comments