Alan Moore and... the Brexit Poem

Excerpt from a letter - dated 2 February 2017 - written by Alan Moore to comedian Stewart Lee in the series of correspondence in the Longplayer Letters.

Alan Moore: [...] I’d like to leave you with the ‘Brexit Poem’ that I jotted down in an idle moment a month or two ago:

“I wrote this verse the moment that I heard/ the good news that we’d got our language back/ whence I, in a misjudged racial attack,/ kicked out French, German and Italian words/ and then I” [...]

The complete letter is available HERE.
Posted by smoky man at 10:00 AM 0 comments 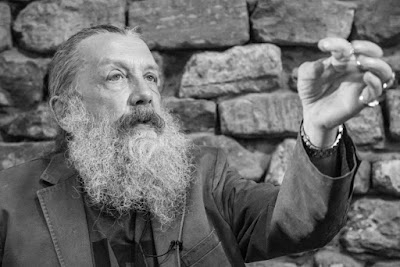 Excerpt from an interview published on Super Weird Substance.

The interview is a full transcript of the one filmed and shown at the debut Festival 23, which took place in South Yorkshire between 22nd and 24th July 2016.

Alan Moore: [...] I found out this idea is called ‘Eternalism’ apparently. It’s the idea that’s as we were saying, that if this is a solid universe then we exist in that universe as fourth dimensional entities.

I imagine it as a bit like a spacetime centipede; it would have a lot of arms and a lot of legs and its tail would be emerging from between our mother’s legs, it would have its origins in genetic fluids; its far end would be cremated dust and it would be perhaps, what 70-80 years long. And this centipede-like life form is a little filament that is embedded in this huge, eternally unmoving, unchanging mass of spacetime.

Only when we have turned the projector beam, or by analogy, our consciousness, only when we run that over those images does Charlie Chaplain do his funny walk, does he fight the baddy, does he get the girl; do we have the appearance of a story, a narrative and motives and cause and effect and all of those things. Whereas actually, it’s just these frozen individual moments with our consciousness moving between them.

Now that would mean that in that huge block of spacetime, every moment that has ever existed or will ever exist are all existing conterminously, at the same time. Including all of those moments that made up our lives and the lives of everybody that we knew and the one thing that we can definitely say about those lives is that we were alive during them.

If this is an unchanging and unmoving universe, then we’re still alive during them because everything back there in the past, the fact that there’s no decent telly on a Saturday night, all those buildings we love, they got pulled down, those people that we liked, they ended up dying, Spangles, they don’t make them anymore! [...]

The complete interview is available HERE.
Posted by smoky man at 5:09 PM 0 comments

Above, a superb portrait of Alan Moore (I love the ringed fingers and the flame!) drawn by American comic book artist and creator FAREL DALRYMPLE.

The Tempest is coming!

From the Top Shelf Panel at San Diego Comicon 2017.
Alan Moore and Kevin O’Neill will be teaming up for League of Extraordinary Gentlemen Vol 4 called The Tempest, a six issue series in full color, and drawn from pop culture throughout time and space. This will be their “retirement project”, their last in comics, according to Top Shelf.

More at Top Shelf site: "[...] Opening simultaneously in the panic-stricken headquarters of British Military Intelligence, the fabled Ayesha’s lost African city of Kor and the domed citadel of ‘We’ on the devastated Earth of the year 2996, the dense and yet furiously-paced narrative hurtles like an express locomotive across the fictional globe from Lincoln Island to modern America to the Blazing World; from the Jacobean antiquity of Prospero’s Men to the superhero-inundated pastures of the present to the unimaginable reaches of a shimmering science-fiction future. With a cast-list that includes many of the most iconic figures from literature and pop culture, and a tempo that conveys the terrible momentum of inevitable events, this is literally and literarily the story to end all stories. [...]"

The Tempest miniseries will be published by Top Shelf and Knockabout, each issue 32 pages, with first issue to be released in June 2018.
Posted by smoky man at 10:29 PM 0 comments

Above, an intense portrait of Alan Moore drawn by Italian comic book artist and graphic journalist GIANLUCA COSTANTINI.
Moore's statement is a quotation from the correspondence published on Cerebus N.219 in 1997.

For more info about Gianluca Costantini, visit his Official page 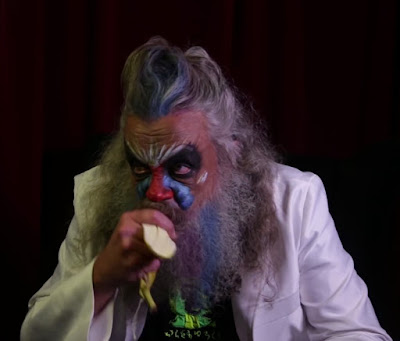 The Mandrill explains his vision. 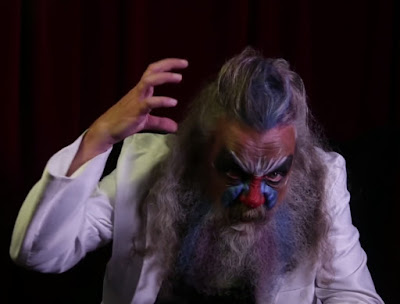