Gerhard and... Dr. Manhattan on Mars

Canadian artist Gerhard, known for the amazing background illustration work he did on Cerebus the Aardvark, drew a great Martian location for a little Dr. Manhattan portrait by Dave Gibbons.

The whole story can be read on Gerhard's blog: here.
Posted by smoky man at 4:37 PM 0 comments

A story in just six words 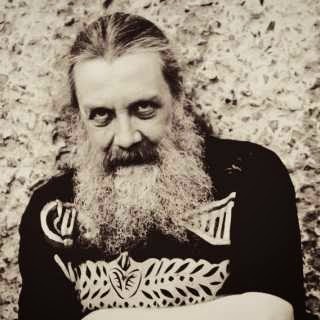 In 2006 Wired asked sci-fi, fantasy, and horror writers to create a story... in just six words, as Heminguay did. All the contribuitions can be read here.

Below, two panels from a page written and draw by Israeli illustrator and comic book artist ASAF HANUKA for his autobiographical comics The Realist.

The complete page can be read here.
Posted by smoky man at 12:55 PM 0 comments

The much awaited first issue of Providence, written by Moore with art by Jacen Burrows, will be released by Avatar Press in May 2015. [Source: Bleedingcool]

Lovecraft wrote Cool Air during his unhappy stay in New York City, during which he wrote three horror stories with a New York setting. [...] The building that is the story's main setting is based on a townhouse at 317 West 14th Street where George Kirk, one of Lovecraft's few New York friends, lived briefly in 1925. [Wikipedia]

It's Dr. Muñoz room from Cool Air.
"[...] after a time I came upon a house in West Fourteenth Street which disgusted me much less than the others I had sampled. [...] in my third-floor front hall room [...] One evening at about eight I heard a spattering on the floor and became suddenly aware that I had been smelling the pungent odour of ammonia for some time. Looking about, I saw that the ceiling was wet and dripping; the soaking apparently proceeding from a corner on the side toward the street. [...] Mrs. Herrero disappeared up the staircase to the fourth floor, and I returned to my room. The ammonia ceased to drip, and as I cleaned up what had spilled and opened the window for air, I heard the landlady's heavy footsteps above me. Dr. Muñoz I had never heard, save for certain sounds as of some gasoline-driven mechanism; since his step was soft and gentle." [Excerpt form HP Lovecraft's Cool Air] 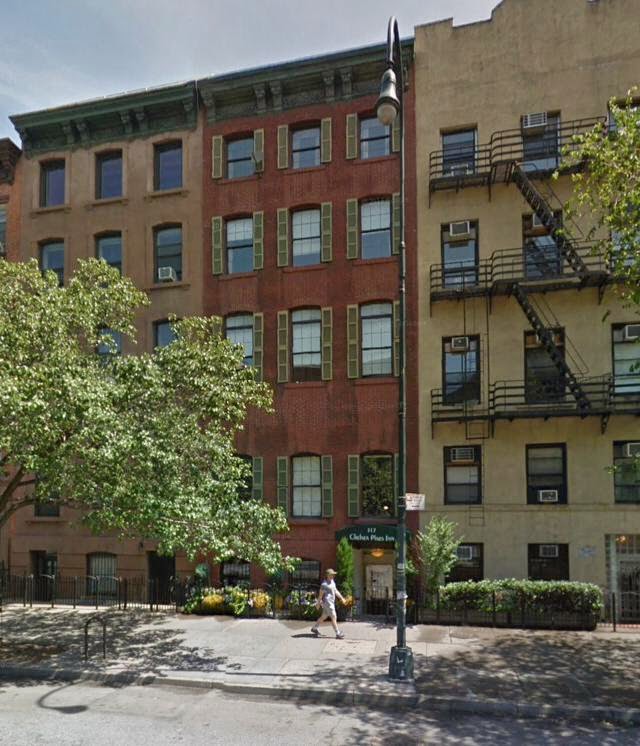 V for Vendetta by Bill Sienkiewicz

[See image above] "Here are some of Dave’s initial notes about the cover and logo. For the logo he specifies a compact typeface to be used either solid black or reversed out. He’s very aware of the impact it will have as negative space in the black rectangle. Dave’s initial sketch at the bottom has the concept pretty well set, though in the cover layout above that, the logo is more compact. That layout is really remarkably close to the final design, though DC made some small changes, such as putting the book title in smaller type at the very top of the logo column, as insurance, I suppose, for books that were displayed partly hidden. Dave’s two “roundels” were followed, with the top one being the DC logo, the bottom one a clock whose hands crept ever closer to midnight as the series continued.

So many ways in which these designs by Dave Gibbons were innovative and fresh, to match the equally groundbreaking story inside. Dave’s design talent has sometimes been overlooked because his art is so appealing, but as you can see, he’s got terrific design skills, too."

The complete article can be read here.
Posted by smoky man at 10:00 PM 0 comments

Below, pages from Dylan Dog N. 341, published this January in Italy by Bonelli Comics, featuring a character with the same physical appearance of... Alan Moore!
In the comics, Moore is Marcus Irvine, a reclusive designer of high tech objects like smart-phones and tablets who works for multimillionaire tycoon and Dylan Dog's new nemesis John Ghost. Irvine lives in an estate that duplicates James Bond's Skyfall and, obviously, uses back magic to create his works.

Dylan Dog N. 341 is written by Roberto Recchioni with art by Angelo Stano and Daniele Bigliardo (who drew the Moore's sequence).

Dylan Dog, created in 1986 by writer Tiziano Sclavi, is one of the best selling Italian comics of all time and a national pop-icon. Wikipedia page: here. 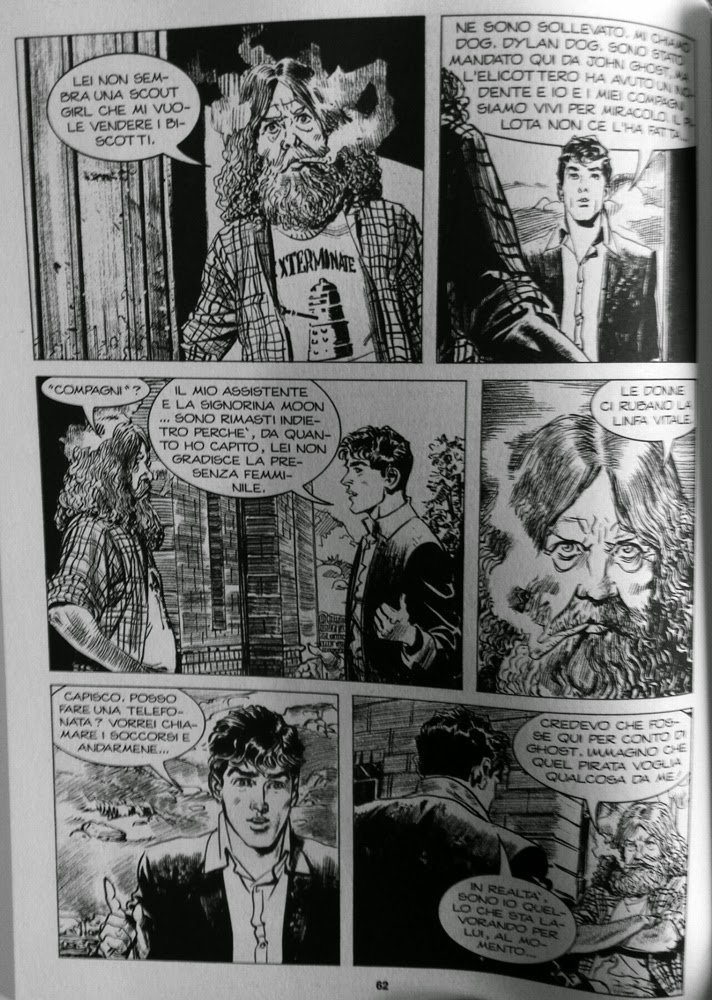 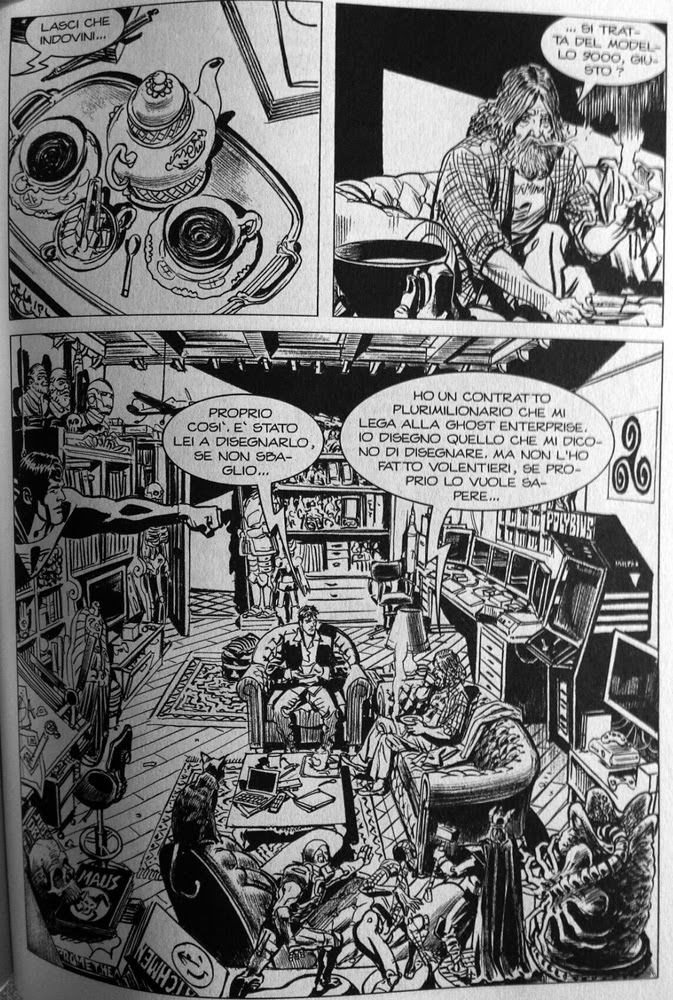 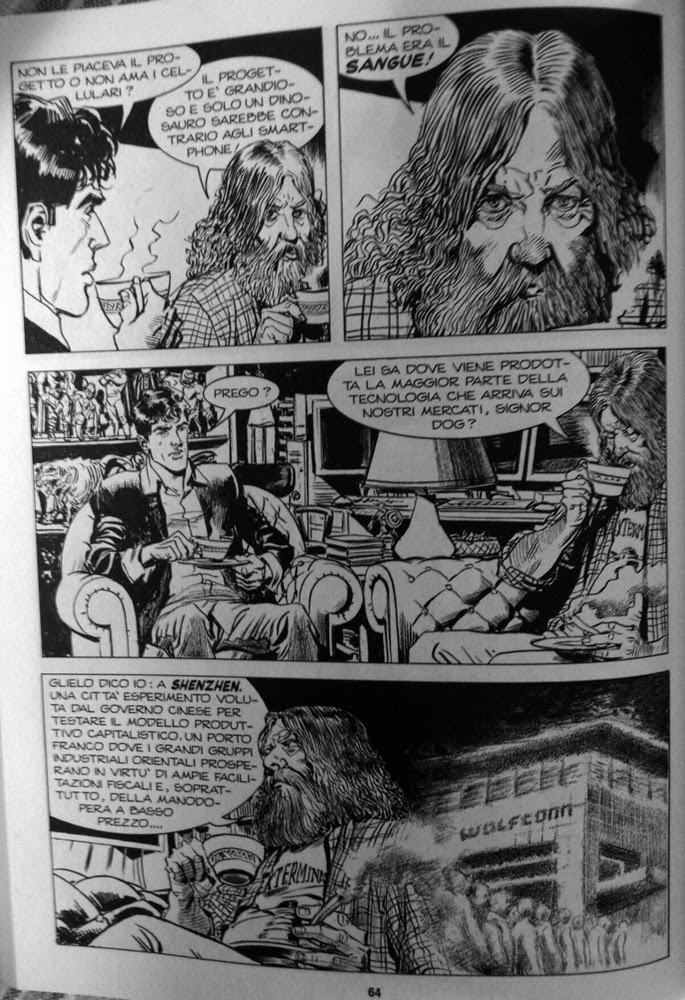