Full Bleed Vol.1 - a brand-new quarterly, hand-crafted print-only 200-page hardcover 'magazine' from IDW Publishing - will include a lost interview to Alan Moore conducted by Gavin Edwards and originally intended for Rolling Stone back in 2006. Below you can read a small excerpt.
The magazine estimated delivery time is December 2017.

GAVIN EDWARDS: Do you remember your first trip to London?

ALAN MOORE: I think so. It was in a hired mini-bus with my uncle and my parents and my cousins and my brother. It was in the very early '60s and there were milk bars everywhere, which we thought terribly exotic.

GE: I've heard of milk bars, but I've never seen one outside of A Clockwork Orange. Did they literally serve milk, or were they ice-cream shops?

AM: I'm not even sure. I think it was a kind of café with coffee, tea, and milk. It seems strange looking back now—they can't have served just milk. It was very bohemian in London in the '60s. I presume they just didn't serve alcohol and there was presumably a pretty fast trade in pep pills going on instead. I remember going to the London Zoo and finding that a bit unnerving—I didn't like seeing animals in cages—except when there was an elephant that evacuated its bowels all over one of its keepers spectacularly. I shall never forget that. That was when I was six or seven. I didn't go to London again until I was a teenager and starting to get involved with the early part of comics fandom. I could never live there—it's a bit of a nightmare—but it's a fascinating city. I still go down about once a month.
Posted by smoky man at 4:40 PM 0 comments

Leomacs has published works for both the Italian and the French market. He drew stories for Italian comics icons Tex and Dylan Dog. He is also the co-creator of vampire anti-hero Battaglia.

"Moore is not easy to draw but he has a very, very interesting face.", said Leomacs.

Below you can see the preliminary sketches he did. 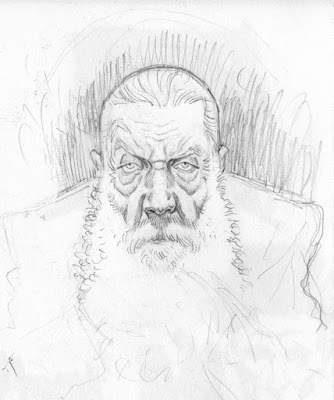 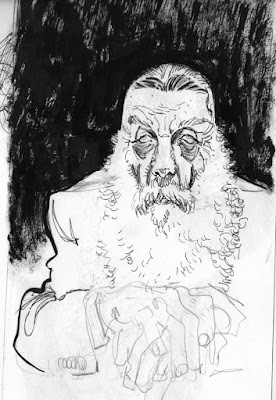