We talked about it some months ago and last November 2012 they were officially released: Act's of Faith and Jimmy's End, the first two shorts in a noirish film series realized by Alan Moore in collaboration with photographer Mitch Jenkins (they previously worked together on the Unearthing project).

"[...] The series, comprising five shorts leading up to a feature-length, also entitled The Show, marks Moore’s first writing specifically done for the screen and is set in their mutual hometown, Northampton, exploring the locality’s seedier underbelly.

So far, two films have been delivered: the first, Act's of Faith, follows Faith Harrington (Siobhan Hewlett), a single nymphomaniac living on her own who pursues increasingly insidious ways to fulfil her addiction. The second has James Mitchum (Darrell D'Silva) making his way into the bowls of St James End Working Men’s Club's neo noir-tinged crypt of debauchery and hedonism."
From The Quietus interview with Mitch Jenkins: here.

Alan Moore about the importance of Art

Excerpt from an interview conducted by D M Mitchell for Paraphilia Magazine. It can be downloaded from Issuu.com (here).

Do you think art/literature etc still has a voice that can make any difference? Can it even be heard nowadays?
Of course art and literature make a difference. Increasingly, in a world dominated by booming governmental and corporate pronouncements, individual human voices are about the only things that can make a difference. Just using it as an example that‘s readily to hand, for whatever reason movements like Occupy or Anonymous have adopted the V for Vendetta mask and basic ethos it would still appear that they have taken some slight inspiration from the original work. And of course, there are the differences that art and literature have made which are only apparent in what we can‘t see: how much easier would it have been to totalitarian state in this country had Orwell and Huxley not written 1984 or Brave New World? I think the crucial point in your question is whether art and literate can still be heard in the clamour of contemporary society, or at least whether they can be heard clearly and free from distortion. The problem, it seems to me, lies in our modern construction of art being simply a category of entertainment. Classified thus, it‘s inevitable that almost all commercially successful art (and these days, if we speak of success, it is generally in a commercial sense) will be managed by an entertainment industry. The clue here is in the word "industry", in that such an enterprise will always place commercial considerations first and will in time condition the people hoping to work in such a field to do the same. What is the point, after all, of creating something exquisite and perfectly expressive of one‘s inmost feelings if there is no way of displaying one‘s creation to an audience of any kind? I see this attitude as being profoundly toxic, and deplore its apparent easy acceptance throughout today‘s supposedly creative community. In my own Blake, Bunyan and John Clare informed opinion, if you are lucky enough to have acquired artistic abilities then expressing them lucidly and eloquently without compromise is not your career, it is your job and your responsibility. If you are an artist, of whatever variety, I suggest that you are more likely to find satisfaction and meaning in your life by remaining loyal to yourself and to the integrity of your creation, rather than by pimping your muse to the first wealthy-looking customer to stroll along the boulevard. Art and literature can make an enormous difference, but only if they are genuinely art and literature as opposed to corporate-approved fanfares that only add to the already deafening level of cultural noise.


The complete interview is downloadable from Issuu.com (here).
By D M Mitchell for Paraphilia Magazine
Posted by smoky man at 11:04 PM 0 comments 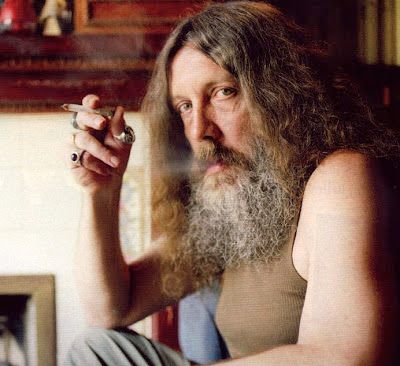 Excerpts from an interview originally published in The Stool Pigeon (here)

The Stool Pigeon: As much as this could either be a cliché or a truism, to what extent do you feel that taking LSD as a teenager acted as a catalyst or a key as it were?
Alan Moore: Of course you can never say what would have happened if it had gone otherwise. I would say that it had a tremendous impact on my life. When I first took acid, I saw a quality of hallucination that was only like that for a few years. Very much like a Martin Sharp [of Oz magazine] illustration. It was very liquid and drifting. But then, a few years later — I’m sure that the acid was exactly the same — it was the landscape that had changed. The experience had become more crystalline and hard-edged. A bit more paranoid. But, yes, it made me realise that actually reality was a state of mind and that, as your mind could change, so could your reality. This was something that would have a big influence on my later thinking, and I also think I realised that my perceptions about art and writing and music when I was in those sort of states were wonderful. But it didn’t mean that I liked everything — far from it. I became quite critically acute, but I would enjoy the piece of art, whatever it was, on a much more profound and glowing level. So I think I probably resolved to try and write or draw or create for people in the same kind of condition as I probably was when I’d created those words. It’s a bit like Jason Spaceman and Sonic Boom from Spacemen 3 back in the day when they wrote ‘Taking Drugs To Make Music To Take Drugs To’. I thought, ‘Yeah, that’s an elegant formula and I’m sure that an awful lot of art in the history of the world has been created in this way.’ I’m sure that’s what Wilkie Collins was doing and I’m sure that’s what Samuel Taylor Coleridge was doing.

SP: Did you ever see the really bad side of acid? I don’t just mean feeling a bit weird or paranoid, but having the full-blown simulacra of paranoid schizophrenia?
AM: Not quite that bad, but I did have plenty of bad trips. I laid off the acid around the time that I got expelled from school. I’d already done 50 or 60 trips in a year up to that point and I was probably starting to have some strange ideas. But this was only ever recreational. In the West, it’s always going to be in the context of getting out of your head. Say in the case of eighties’ rave culture… you would get kids going to raves and having a blissful experience — an experience of satori [Buddhist term for enlightenment]. But after the weekend was over, they would have to go back to the council estates that they were trying to escape from. They were still there. And for some of them a chasm opened up between their desire and their circumstances that they fell into and didn’t get back out of.

SP: Do you still take acid?
AM: I take magic mushrooms. The first time I combined them with a rudimentary magical ritual… well, that was the eye-opener. I suddenly realised that the combination made the magic work and made the drug much, much stronger and more profound. And since then I’ve only taken mushrooms in ritual circumstances. There just doesn’t seem to be any point in doing it otherwise.