The Alan Moore: Portrait of an Extraordinary Gentleman tribute book I co-edited in 2003 with Gary Spencer Millidge contained a wide variety of material - such as essays, appreciation texts, memories, homage illustrations, interviews, and so on - to celebrate the 50th birthday of Alan Moore.


There were also some comics short stories included in. Some contributors were thrilled by the idea to play with Moore-related characters, so the book was enriched by a bunch of comics that paid homage to characters created by Moore, moments from Moore's stories or had Moore himself as the main character.
Italian artists Davide Barzi (story) and Oskar (art) created a very funny 2page story (titled SandokAlan) which did homage to The League of Extraordinary Gentlemen series featuring Moore himself. It's was a "strange" Moore because he has been mashed-up with Sandokan, a classic hero created by Italian writer Emilio Salgari.

The story can be read at page 38 of the sold-out volume and it appears here on AMW with the artists' permission. Again, many thanks to Mr. Barzi and Oskar for their great contribution to the Alan Moore: Portrait. 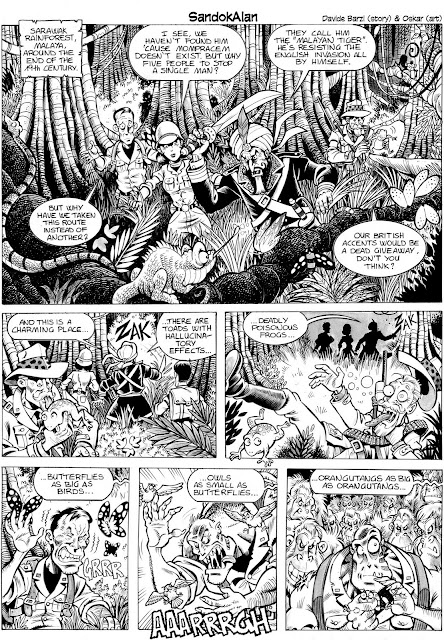 Davide Barzi is a well-known Italian comics writer, journalist and critic. He worked for several Italian comics publishing houses and he is a regular collaborator of Sergio Bonelli Editore.

Oskar started his career as penciler and inker in the 90ies and worked on the popular Italian series Alan Ford. He collaborated with Barzi on several projects; currently he is a member of the art team at work on SBE's science fiction series Nathan Never.
Posted by smoky man at 5:22 PM

Being a regular visitor I think it´s time I congratulate you for your constant job in keeping this site about the master. I read "Portrait Of an Extraordinary Gentleman" -in the spanish edition, that´s becouse I´m spanish :)- a loooong time ago and I keep it at good hand in my colection of Moore studies and memorabilia.

Just keep the excelent work!! We, the madmans of Moore, really appreciate it.

Cheers!! And sorry for my poor english.

Thanks for the kind words! Really! :)