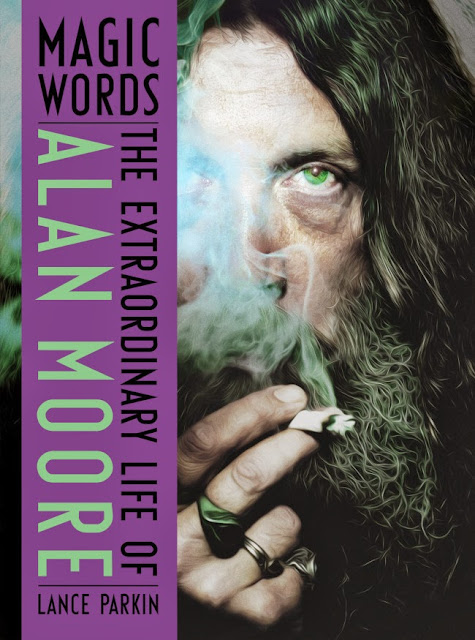 On 18 November this year, Alan Moore turns sixty. In anticipation of that landmark birthday, expert and aficionado Lance Parkin goes in search of this extraordinary gentleman, and reveals a writer quite unlike any other working today.

The 7 November Aurum Press will release MAGIC WORDS: THE EXTRAORDINARY LIFE OF ALAN MOORE, a 400+ pages literary biography of the Bard of Northampton written by Lance Parkin.

In the following you can read a brief interview I did with Parkin (conducted via email a couple of weeks ago). 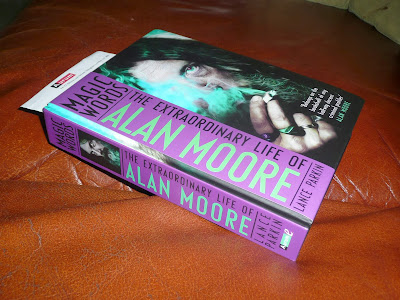 How did you start writing another book - a biography (!) - about Alan Moore? And how hard was the process?
Parkin: I really wanted to write something hefty about Alan Moore, a proper book, a literary biography that tells the story of his life and art. I wanted to go into depth, to push at things, not just to recount the facts or rely on interviews with Moore himself.

As you say, I’d previously written The Pocket Essential Alan Moore. That first came out in 2002, it was revised for a reprint in 2009. It’s a good little book, it’s available as an ebook for anyone who’d like a copy, but it’s 15,000 words. It’s more like an introduction to Moore. Magic Words is 165,000. The shortest chapter is longer than the whole Pocket Essential! I had three years to write it, so I just had the time to puzzle over things, redraft, get obsessed with tracking down one little factoid. In a way, having 165,000 words is far easier than trying to condense it to 15,000. You don’t have to simplify, you can go into as much detail as is needed, instead of going ‘they argued’ you can spell out every step of who said what.

The hard part was pushing myself to make sure that this wasn’t just a recounting of facts, that I was bringing my own personality to it, some literary flourishes of my own. Anyone with the internet can assemble a pile of information about Alan Moore using Google. So what can I bring, why am I the person to write this, what can I see that other people haven’t? It’s like any writing, you need to hit your subject at an angle.
After you completed the book, what did you learn that you didn't know about the Man and his career? Any anecdote to share or to anticipate?
I learned a lot. There’s some great stuff in there about the Arts Labs, these weird little of-their-time hippie get togethers where people read poetry and played music to each other. I didn’t realise just how formative that time had been for Moore, but once you know about them, everything about him makes a lot more sense. There are places where I was quite surprised people haven’t really dug too deep. I was able to find out a little more about the genesis of V for Vendetta, for example: the role Evey played in the original plans, nuts and bolts stuff like how much Moore got paid per page for writing it.

There are other places where I had to navigate some very complex material. ‘Why Alan Moore falls out with DC’ is this giant knotted ball of events, but once you start pinning exact dates on things, it becomes this sequence of little events that cascade.

Oh, and there’s just some material in there that even avid Moore fans probably haven’t seen. A plot summary of Another Suburban Romance. A quick description of Sun Dodgers, a space opera he worked on in the seventies. The ‘He Is Risen’ poster Moore drew for an Emperors of Ice Cream gig. 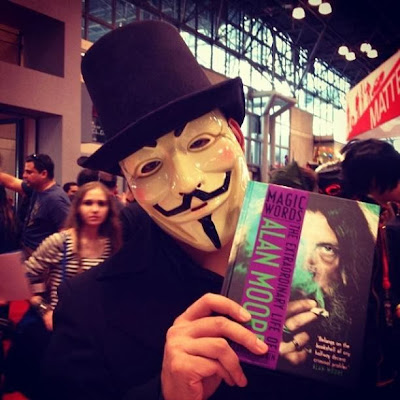 Was Moore involved in any phase? I read a really nice "quote" of sort he wrote...
I sent him a letter, via a rather convoluted route, at the beginning of the process saying I was doing it, and got a very polite and thoughtful note back saying he didn’t want to be involved. He asked me not to hassle his family, but to take full advantage of it being an unauthorised biography. And so that’s what I did. I spent three years writing a book without Alan Moore looking over my shoulder, and tried to write as full and honest a book as I could. As with every human being, Alan Moore has done things that can be criticised or which look unreasonable. There have been disputes, and when there’s a dispute, there are two sides to a story, so I sought out the other side.

Skip to three years later. I delivered my book, and once we were happy with it, out of courtesy, we sent a copy of the manuscript to Alan Moore on a Friday, with some trepidation, and on Monday morning he phoned my editor, said he liked the book and that he’d like to discuss it with me. I had two long phone calls, the first was just picking through the book and correcting or adding little factual stuff – the name of the caravan park he went to as a child, that kind of thing. The second, I got to interview him properly and to ask about some of the gaps. I’ll be putting the interview up on my blog around the time the book comes out.

I was able to incorporate that interview into the biography, but it’s exactly the book I wrote, with a couple of clarifications from Alan Moore. He didn’t go through it with a red pen and cross out things he didn’t like. So I’m in this odd position that I wrote an unauthorised biography whose subject likes the book. He wrote a fantastic endorsement of the book. 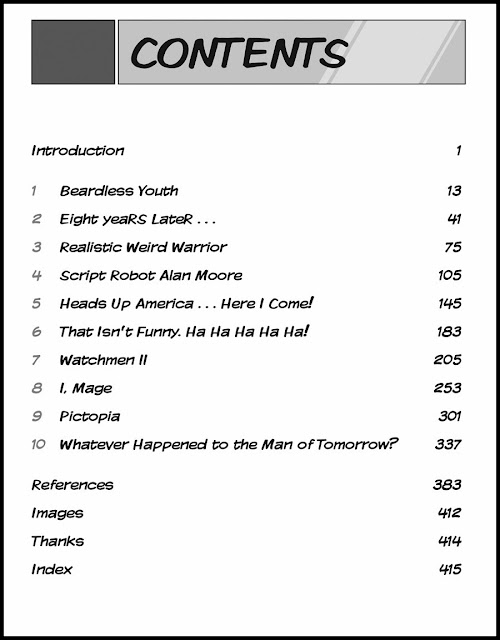 Which are your expectations about the volume? Are you planning any event, any tour or something like that, for promoting it?
This is not the first or last book people will write about Alan Moore. Magic Words is a literary biography, it looks at his work and his career. I hope people read it, obviously, that it inspires them to look at some of Moore’s more obscure work and to look at his bestseller stuff in a new way. I’d like it to be a good account of some of the more tangled bits of his life. I can guarantee that even the most fervent Moore fans in the world will learn things they didn’t know before. As a basic hope, though, I think Alan Moore’s an interesting person and so I hope this account of his life captures as much of that as possible.

I’m doing a lot of interviews, I’ve written a couple of articles for people. This is the first book where I’ve really done the social media thing in a systematic way. I’d like to take this opportunity to apologise to all my Facebook friends, who’ve been a little bombarded! But that’s so important now – good reviews on Amazon and Goodreads, get lots of pre-orders in, generate some buzz with something as simple as ‘look at all those Likes’.

Back in the day, Moore pioneered a lot of this. It’s odd to say that, but he worked the convention circuit, did endless interviews and appearances.

My publishers have pulled out all the stops, it’s fantastic. They sent me to Comic Con in New York in mid-October for a signing (that was the first time the book was on sale anywhere, they airfreighted in copies), they’re arranging a signing and Q&A for the book launch in London in late November. That’s going to be quite a lavish event for Moore’s fans, I think, there’s going to be more there than just me and a pen.

Considering your knowledge about the subject, which is the thing you would like to see from Moore in the upcoming future?
I’m looking forward to Jerusalem, his vast prose novel. If he did requests, I would love him to do something immense and substantial about William Blake. A graphic novel that did something very clever with Blake’s original artwork, and that complex personal mythology. Moore’s talked about Blake a fair bit, and he did a performance piece, Angel Passage that touched on Blake, but I’d want something with a sort of From Hell density and size to it. 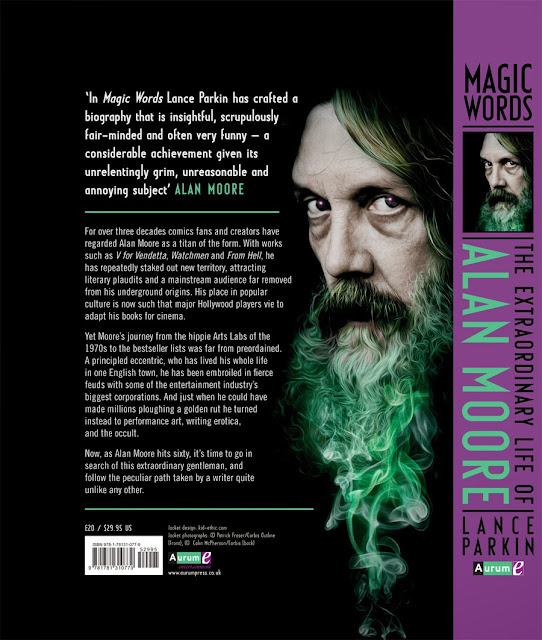 Italian version of  this interview: here.

Another interview with Parkin can be read here.
A review of the book: here.
Posted by smoky man at 1:24 AM

Absolutely great!!! I´m really looking forward for this book... and this interview is pretty awesome, too!!

SO looking forward to this! Have it pre-ordered on Amazon and am literally counting the days....promises to be amazing