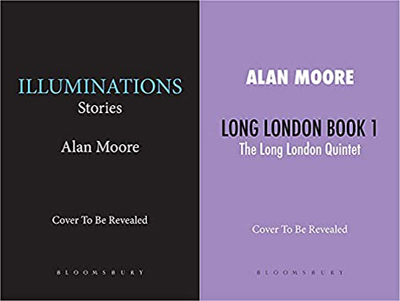 Details are emerging regarding Moore's upcoming books: Illuminations and Long London (book 1), both to be published by Bloomsbury

The first-ever short story collection from the beloved creator of Watchmen and numerous other classics, a beguiling series of tales on the revealing power of magic and imagination.
Illuminations is an astonishing, rich and broad collection of short stories, each featuring some kind of illumination or realization. From ghosts and otherworldly creatures to the four horsemen of the apocalypse to the Boltzmann brains fashioning the universe at the big bang, Alan Moore's Illuminations is a series of beguiling and elegantly crafted tales that reveal the full power of imagination and magic.
Bloomsbury Publishing - Publication date: 6 September 2022

From the beloved creator of Watchmen and numerous other classics, the Long London series is a tour-de-force that tells the story of the timeless shadow city full of magic and memory somewhere beyond the "real London."

Long London is a series about "a sometimes-accessible shadow city that is beyond time." This is a hugely inventive, atmospheric, mythical world of murder, magic and madness. It is a quintet of novels that sweeps across the 20th century, starting in the shell-shocked and unravelled London of 1949, and following the populations of writers, criminals, artists, and magicians through that familiar city and a version of London just beyond our knowledge.
Bloomsbury Publishing - Publication date: 2 April 2024