Alan Moore... a showman in essence by Mike Collins 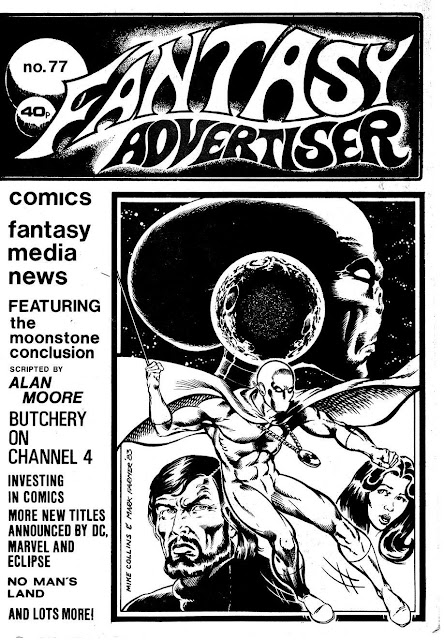 From the sold-out Alan Moore: Portrait of an Extraordinary Gentleman book, below you can read the text piece written by British well-known comic book artist MIKE COLLINS to celebrate Alan Moore's 50th birthday in 2003
For more info about the artist: Official site - Twitter
The Moonstone story written by Moore and referred by Collins in his piece can be read HERE.

ALAN MOORE: I KNEW HIM WHEN…
by Mike Collins
In the early 80s I met Alan Moore. He was as grand and imposing as anyone I’ve ever encountered. The beard, the hair, the manner: a showman in essence, an entertainer with more than the vaguest hint of menace. He was waxing eloquent about his first proper series for 2000AD - Skizz - and how several elements he’d included mirrored actions in ET (the movie it was to ‘echo’ in the grand 2000 tradition) even though he hadn’t seen it while writing. He was witty and self-deprecating and I was going to have to tell him that I was working with him. I feared for my life.

At the time, I was scuttering at the edges of comics, trying to snatch scraps of work. Links with the Society of Strip Illustration led to odd jobs, the latest of which was to work on a semi-animated movie called ‘Ragnarok’. Designed by my pal Bryan Talbot, it was to be written by Alan.

At this point, I had encountered Alan’s name in 2000AD Future Shocks, in the astonishingly re-invigorated Captain Britain and of course, in Warrior. The chance of working with him was daunting - he had become a legend overnight so it seemed. I met him at a London Comics Con (at some hotel, somewhere—all I remember is the hair-raising and life threatening journey on the back of a motorbike to get there) where he surprised me by knowing who I was and what I’d done in fanzines. Mine’n’Mark Farmer’s strip ‘Moonstone’ was reaching a conclusion, and I’d written myself into a corner. Alan asked how it’d be resolved; I said I dunno... any ideas? To my amazement he offered to write the final episode, wrapping up my over-complicated alternate reality/time travel paradox epic, which he did beautifully in four pages.

Pleased with the result (and from the work Mark and I did on Ragnarok, I hope) he recommended us to Bernie Jaye at Marvel UK. He’d sent in a parody strip of Frank Miller’s Daredevil run, and attached our names to the script. After a bit of reluctance, she took us on board. From then on, we were comics professionals.

Thanks to Alan’s good graces, we’d gotten through the comics Catch-22: ‘No one will hire you until someone hires you.’ I imagine this book is full of artist and writers who speak well of Alan and how he helped along their careers. It’s not too extreme to say that without Alan, UK and US comics would look different today. He championed people he thought needed the break and - as one of them - I’m eternally grateful to him.