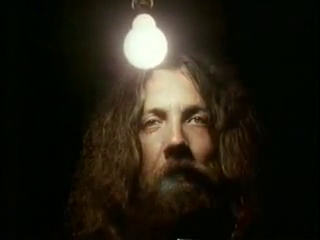 From the sold-out Alan Moore: Portrait of an Extraordinary Gentleman book (2003, Abiogenesis Press, page 119), in the following you can read the piece written by Antony Johnston to celebrate Mr. Moore's 50th birthday.

Pick up the phone
© Antony Johnston

I can't do it. I can't pick up the phone.
Rewind: I'm eleven years old. I read comics. When I grow up, I'm going to draw them. I know this, in the unconscious reaches of my juvenile heart. I know it. And the comic I will work for is called 2000AD.

Understand, this was a time when 2000AD wasn't the only boy's comic on the newsstands. ACTION, BATTLE, SCREAM, EAGLE... Seemed like every six months there'd be a new comic launched, a new way to spend that pocket money. And spend it I did. Who needs sweets when you can have comics?

But there was never any question that 2000AD was the superior comic. Some of us read other comics too. Some of us - well, me - read pretty much every other comic too. But in the playground, on the way home from school, wherever you went in my world, everyone read 2000AD.

But 2000AD had D.R. & QUINCH, and SKIZZ, and HALO JONES, and ABELARD SNAZZ, and these amazing TIME TWISTERS that bent your mind out of shape.

Forward a year or two: somewhere in the darkness, a switch is thrown. A light bulb comes on above my head. And I realise, for the first time, that a comic doesn't just come into being. An artist doesn't just sit down and draw stuff until a comic bursts from his head fully formed like Athena.

And some people write more than one story.

That was it. That was when I began reading credits. This would culminate in my current state, a state where I must read the indicia of a novel, where I must watch the credits of a movie, where I perplex my friends by nodding and saying, "Oh yeah, them" in a knowledgable grunt when I see casting companies credited on screen.

Bear in mind, at the time I was also blatantly copying Steve Dillon's artwork.

Forward another year or two. My stories are, of course, still crap. Even I can tell that. Doesn't stop me exactly, but despondency is starting to set in. I'm fourteen years old, and hardly anyone I know still reads comics. We've all started playing roleplaying games instead. My parents don't have the faintest idea what this comics lark is about. Frankly, they're amazed I'm still reading them.

These are the dark days. I have no-one to turn to. No-one knows my pain. (Insert other teenage angst here as appropriate.)

Then. Then, my local TV station repeats a late-night series made the year before, called ENGLAND, THEIR ENGLAND. It showcases unusual British talents and success stories. I can't remember what the rest were - doubtless people who run proper businesses, with big buildings and machines and everything - but this one, I remember. 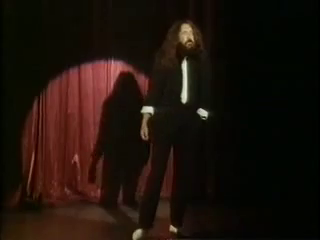 It is called MONSTERS, MANIACS AND MOORE. Oh, yes.

I duly set the VCR.

Like the tape I would have some years later of Bill Hicks' RELENTLESS performance, MM&M would get to know the inside of my parent's VCR very well indeed in a short space of time. I had, in my clumsy teenage fashion, found a guru.

The programme taught me three major things about Alan Moore.

Wait a minute! Northampton? That's just down the road from me! My great-grandfather still lives there!

From that day on, my confidence never wavered. It was possible to come from a working-class family (check), to have a distinctly average formal education (check), to be from the Midlands (check), and yet still write comics. Great comics, at that.

I could do it. I was going to do it. I had it all planned out.

And then along came beer, sex, more beer, and... Well, I carried on reading comics. For a bit. But, you know - sex. And beer. Comics didn't stand a fucking chance.

Forward: what about this bloody phone? Yeah, yeah, I'm getting to that.

So it's early 2000. A few months previously, I'd started reading comics again. Because I'd decided I wanted to write them.

(The intervening time is a long and largely boring story. All you need to know is that my art skills never progressed beyond the age of sixteen, and that's not saying much. A writer, then.)

So this friend of mine, this guy I've gotten to know since entering the now-largely-online comics community, asks me if I want Alan Moore's phone number. Do what, I say. He repeats the offer. Just don't tell anyone where you got it, he says, or Alan will fucking kill me. Go on then, I reply. Why not?

Half a millisecond after I write it down, I realise why not: I can never call this number.

I mean, since I last read an Alan Moore comic he's stopped going to conventions. He's become a magician. He doesn't even have an internet connection, for heaven's sake! This man clearly does not want to be randomly contacted by some star-struck old fanboy. And this star-struck old fanboy does not want to approach publishers and have them think, "Fuck, this is that guy Alan Moore told me was stalking him. Reject! Reject!"

Paranoia does horrible things to your brainmaggots, I can tell you.

So I didn't use it. I was terrified to my core.

Forward again: it's 2002, and I've just been approached by Avatar to adapt a short Alan Moore story into comic form. After picking myself up off the floor, I do just that. It goes well. Alan seems to like my stuff, and what I've done with his story.

No. Abject terror, it turns out, is a powerful deterrent. Who knew?

Forward again: it's later in 2002. I get an email from the producer of the FROM HELL movie. He's interested in one of my comics, wants to talk about maybe optioning it. Now, by this time I've already had some first-hand experience of producers, and realised that they're just like everyone else; some are good people, some are fuckwits, and it's sometimes hard to tell which camp someone falls into until you've already wasted hours on the phone.

So I look up the guy's credentials. Turns out he's produced some damn good films. Friends tell me "Yeah, he's for real. He's a good guy." But these are people who live and breathe the movie industry. I want an objective opinion, from someone who isn't afraid to speak their mind.

I can tell you're ahead of me, here.

I am literally shaking as I pick up the phone. Every possible response runs through my head. "Who the fuck are you and how did you get this number?" surfaces with alarming regularity.

I can't do it. I can't pick up the phone. He's not going to know who the hell I am. Why should he?

Yeah, like that helps me any. I'm still shaking, and now my throat feels like a camel's gonads to boot.

I pick up the phone.

"Yes." (Christ, his voice is deep! Jesus fuck, does he chew gravel or something?!) 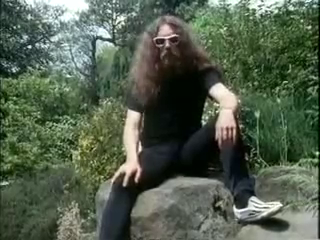 Antony Johnston is an award-winning, New York Times bestselling author of graphic novels, video games and books, with titles including Wasteland, Daredevil, The Coldest City, Dead Space, and ZombiU. He adapted several Alan Moore prose works into comic form for Avatar Press, including The Courtyard and Another Suburban Romance. He has also adapted into a 10 issue series Moore's Fashion Beast, a screen play commissioned by Malcolm McLaren and written by Moore in 1985.

All frames are from 1987 documentary show "Monsters, Maniacs and Moore".
Posted by smoky man at 10:24 PM