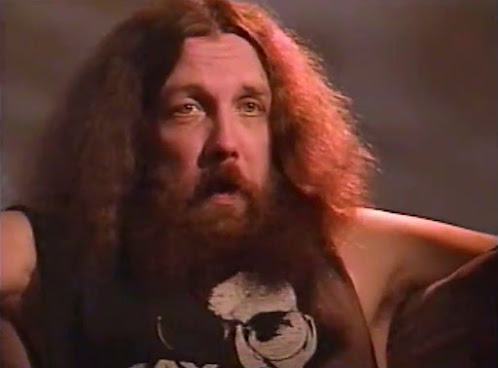 RICK GREEN: It's almost six years later. What do you see as the legacy of Watchmen?
ALAN: I think that I'd have to echo what David Bowie said about his influence, y'know, this is the face that launched a thousand pretensions. At the time I hoped that Watchmen might show up a lot of the essential silliness and redundancy of the superhero genre. It wasn't meant as a revitalization of the superhero, it was meant as a tombstone for the superhero, at least in my terms. I couldn't see any point in doing superheroes, from my point of view, after Watchmen. Unfortunately everybody else could, and there have been an awful lot of bad Watchmen clones, or not just specifically Watchmen clones, but this would extend to Dark Knight as well, people who were looking at those faintly grim and post-modern superhero comics of the mid '80s, and instead of moving on from there, have just recycled them again and again and again for the last six years. It's almost like, you know, post-modernism by numbers. You make a few references to William Burroughs, you make a few references to some currently popular band like R.E.M. that'll impress your young readers with how hip you are, um, you throw in some garbled sort of psych-, sub-psychedelic philosophy, um, and you've got a modern comic. It doesn't matter whether it has any substance, it doesn't matter whether it has any direction, but it hits enough of the right buttons so that people will recognise this as something modern and experimental and daring, and of course it is not in the least bit experimental or daring. To me, the people who have taken chances are not in the mainstream.

ALAN: The people who've taken the chances are the people like Chester Brown, the Hernandez Brothers, Peter Bagge, Julie Doucet, all of those people.  They are not getting big royalties for this summer's giant Batman crossover, but they are doing the work that is dangerously dangerous and radical and innovative. They're the ones who deserve the credit.